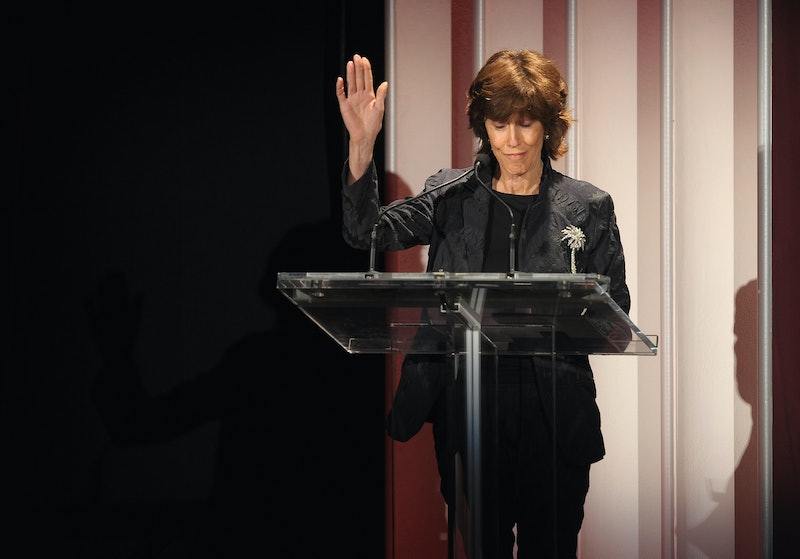 Since her death in 2012 at the age of 71, Nora Ephron has topped my list of writers gone too soon. The woman who gave us When Harry Met Sally... and I Feel Bad about My Neck should have had, by all rights, at least another decade to humor us. Thankfully, she's back in Nora Ephron: The Last Interview , out now from Melville House.

Ephron joins fellow authors Ernest Hemingway and Philip K. Dick in The Last Interviews series' December 2015 batch, bringing the total number of installments up to 13. A 14th volume, dedicated to The Death and Life of Great American Cities author Jane Jacobs, is expected to drop in January 2016. Other honorees in the Melville House lineup include James Baldwin, Hannah Arendt, and David Foster Wallace.

Interviews can be a tricky thing to find. Given that they're generally part of a periodical or broadcast, they're much more fleeting than a book, or even a journal. And because many aren't readily available online, if you miss one the first go-round, you might just have missed it for good.

That's what makes Melville House's Last Interviews so wonderful. No volume in the series contains only one interview. Rather, each provides readers with a variety of conversations with the author, spanning his or her entire career. It's a mini-collection, really, and — if you're a big fan of one of the series' featured authors — it's one you ought to have on your shelf.

The good, if morbid, thing about a series like this is that it will never run out of possible additions. People die, famous or not, but their personalities — many of which often wind up hidden from the public eye — can live on in The Last Interviews. And, let's face it, 14 books is just a drop in the literary bucket.

In 2015 alone, we've lost a slew of famous writers, including John Leggett, Tanith Lee, and William Zinsser. None of my suggestions are quite so recently deceased, but they would all make great installments in this Melville House series. One or two might not be quite literary enough for some, but I stand by my choices.

Even though it has been more than 50 years since her death, I think many of us are still fascinated with willowy, blonde Sylvia Plath. Even the publication of her unabridged journals isn't enough. We need more.

Fans of science fiction and fantasy are still reeling from the loss of Sir Terry Pratchett in March 2015. Whether he was literary or not, he was an award-winning writer who created brilliant, funny worlds for us to lose ourselves in.

Humanities students and scholars the world over are well-acquainted with the work of French philosopher Michel Foucault. Though his ideas are the subject of constant debate, many of them influenced emerging queer and feminist theories.

Despite the cheery outlook of her Emily and Anne books, Lucy Maud Montgomery's life was much darker. She and her husband both lived with mental illnesses, and it has been speculated that the author's death was a suicide. The stark contrast in tone between her popular works and her personal life makes for an interesting examination.

For decades, readers and librarians have loved Walter Dean Myers' authentic portrayals of African-American youth. The Newberry nominee passed away in 2014, but his work continues to impact teen book nerds. Most recently, Myers' 1999 Printz Award-winning novel, Monster, got a 2015 graphic novel adaptation.

Prolific author Doris Lessing penned science fiction, feminist novels, and even a memoir novella about her parents. The Golden Notebook earned her a Nobel Prize, and cemented her place in second-wave feminist canon.

Nigerian-American author Chinua Achebe explored the effects of colonialism on the Igbo people in a trilogy of books that began with his 1958 debut, Things Fall Apart. TIME included Achebe's novel in a 2005 roundup of the "100 Best Books of ALL TIME."

Truth be told, I'd love to read a biography of Ruth Prawer Jhabvala. Her family fled the Nazi regime for Britain, only to endure the London Blitz. Jhabvala later married and went to India, where she lived for more than 20 years, before moving to the U.S. The writer of screenplays for A Room with a View and Howards End, Jhabvala is well-known for her Indian comedies of manners, and for Heat and Dust, which won the 1975 Booker Prize.