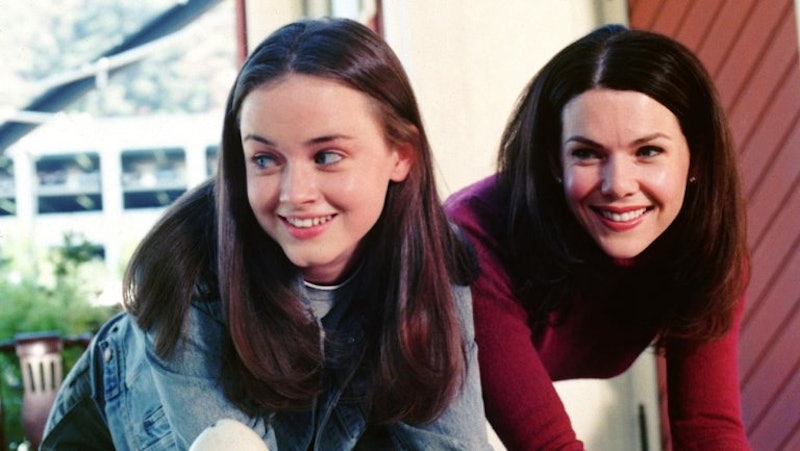 Sure, 2014 seemed like it might have just been the best time to be a Gilmore Girls fan. I mean, the show was put on Netflix in its entirety, for Pete's sake. So, yeah, it seemed great, that is, until 2015 came along, because 2015 was the actual best time to be a Gilmore Girls fan. When it was put on Netflix, it meant a chance to relive all of the glorious happenings of Stars Hollow in one convenient location. Before that, you would've had to own all seven seasons on clunky DVD collections in order to watch the series in its entirety, and, while I'm sure there are some super fans out there who did, most of us did not. When the show came to Netflix in 2014, it reminded fans what they loved about the show, and it sparked a renewed interest in the franchise. Perhaps it was thanks to this that 2015 was filled with reasons for fans to rejoice — reunions! Revivals! Oh my!

The show, which aired from 2000-2007 on the now defunct WB, is a cult classic. The show featured intelligent, independent women who were passionate about life and love. In an era full of teen soaps like Felicity and Dawson's Creek, this was something starkly different. Rory was a well-behaved teen who liked reading, aspired to an Ivy League college, and was not going to let any dumb boy get in her way.

Here's a look at why 2015 was the absolute best time to be a Gilmore Girls fan.

1. It's Allegedly Coming Back

It's pretty common knowledge at this point, but it's exciting nonetheless! Netflix is reportedly producing a Gilmore Girls revival, which will consist of four 90-minute episodes, with each episode making up one season of a year. The show will take place eight years after the events of the finale, which puts the characters in modern day. There are still so many questions to be answered (Did Luke and Lorelai get married? Is Rory working for Hillary Clinton now? How many kids does Lane have?), but, right now, it's enough to know that it's coming.

2. There Was A Reunion

This year, a blessed miracle took place in the form of a Gilmore Girls reunion panel at the ATX Festival. The panel featured most of the cast, and creator Amy Sherman-Palladino, talking in-depth about the show for nearly two whole hours. Sherman-Palladino even spoke about the process of pitching the show, and the actors recounted their auditions. It's wonderful.

Melissa McCarthy was definitely the breakout star of Gilmore Girls. She's gone on to be nominated for an Oscar and just snagged her first Golden Globe nomination. She made an appearance on the Saturday Night Live 40th Anniversary Special and starred in the action comedy Spy with Jason Statham and Jude Law. In August, she debuted her new fashion line, Melissa McCarthy Seven7. Fingers crossed she'll make time to reprise her role as Sookie St. James on the Gilmore Girls reunion.

In addition to talking about her audition for Gilmore Girls at the ATX Festival, Graham told Seth Meyers about how she found out the show was cancelled. She also gave this really thoughtful and wonderful interview to Rookie magazine, where she talks about what draws people to the show.

Television worlds collided this year when both of Lauren Graham's TV daughters met. Mae Whitman, who played Graham's daughter on Parenthood, arranged the photo after attending the ATX Festival. Between the two shows, Graham is basically the surrogate TV mom to a whole generation. We couldn't ask for anyone better to fill that role.

In an interview with Bustle, Bledel talked about how cool it was to participate in the ATX Festival and how nice it is to have "wonderful, smart fans." Though she disappointingly had no comment on the matter of Rory's relationship prospects, she did say that she hoped present day Rory would have a satisfying career. With some big personal events happening, it will be interesting to see how Bledel feels about reprising the role of Rory.

With 360 minutes of Gilmore Girls coming to Netflix soon, there's a lot more for fans to look forward to. No matter what direction the revival takes, where Amy Sherman-Palladino leads us, GG fans will follow.