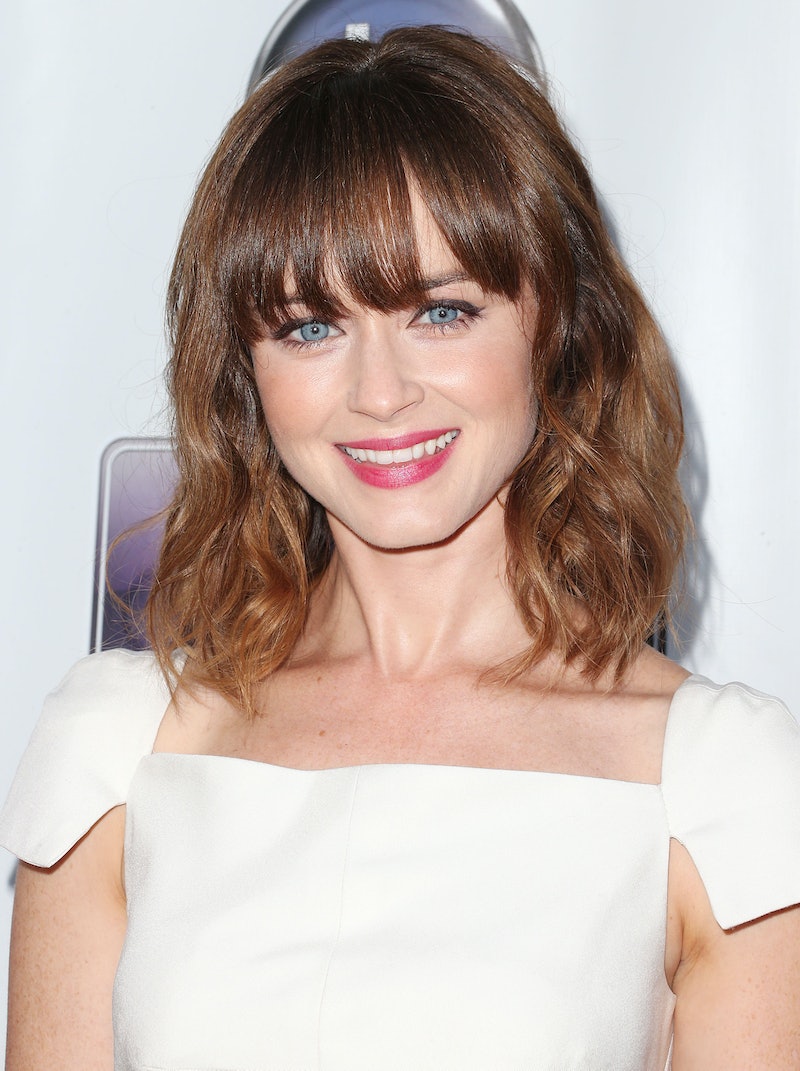 If you're a twenty-something woman who talks fast and drinks a lot of coffee (or just anyone with good taste in TV, really), chances are high that you're a major fan of Gilmore Girls. And, chances are even higher that on June 6, you were perched in front of your laptop, eagerly awaiting every new bit of detail from the Gilmore Girls reunion that occurred at the ATX Television Festival. The panel brought nearly every major actor from the show, from Lauren Graham to Kelly Bishop, on-stage together for the first time in years, and to say fans were into it is an understatement on par with "Kirk's a little odd." One person especially excited about the reunion? Alexis Bledel, who played Rory for seven years on the beloved show.

"It was amazing," she says, speaking to Bustle. "It was so cool to hear all the questions... we have wonderful, smart fans, so it was a fun Q&A."

During the panel, Bledel and her castmates were asked about everything from their characters' futures (Rory's still a journalist, obviously) to the potential for a movie (unlikely, but possible!), to the most important question of all: which of Rory's three suitors — Dean, Jess, and Logan — was really the best choice. Bledel demurred from picking a favorite (could you blame her? The three actors were sitting right there), and would rather focus on Rory's job prospects, instead.

"Maybe she’d just be working so hard she’d be focused on her career [instead of dating]," Bledel says. "Or maybe she’d be seeing someone new."

Sure, fine, but what about the guys?

"I can’t answer the triangle!" she says, laughing. "People have very strong feeling about it. You can’t win. I just expressed [at the panel] that they were all wonderful actors to work with, which is true."

Still, fans certainly weren't happy when Bledel refused to chime in on one of the biggest romance questions of our time, and their reactions were, to say the least, strong. Not that that's unusual for Gilmore fans; viewers of the show tend to be passionate about all things related to the Lorelais and their lives. At the panel, many of the cast members seemed to be used to that type of enthusiasm, but Bledel, who hasn't had as big a post-Gilmore TV career like co-stars Lauren Graham and Jared Padelecki, looked noticeably overwhelmed.

"Lauren had warned me a little bit. She said that our fans are super intense," Bledel says, adding with a laugh, "I was anticipating some intense fanfare, and that’s definitely what we got."

Clearly, Graham takes her motherly role seriously, as the elder Lorelai was also responsible for helping to orchestrate one of the event's best moments: a hilarious, quickly-viral photo of the actress alongside her two TV daughters, Bledel and Mae Whitman (Parenthood). Bledel says that Whitman had the initial idea, but they all were more than happy to take part.

"I thought it was so funny," she says. "At the beginning, when they started Parenthood, I think they were joking around like, she was the new daughter and I was out of the picture."

Like fans could ever forget Rory Gilmore. The character, along with her fast-talking mom, is one of TV's most memorable, and thanks to the recent addition of Gilmore Girls on Netflix, tons of people are discovering the show for the very first time, something that Bledel says is very "cool to see."

"It’s nice to know that people still like it, [or that] they’re discovering it for the first time," she says.

For those (like myself) using the show's availability on Netflix as an excuse to watch it for the 1000th time, nostalgia for the series and its stars is higher than ever. Graham was on TV screens for years as Sarah on Parenthood, but Bledel has largely stayed out of the spotlight, taking on indie films like this month's Jenny's Wedding and small parts on shows like Mad Men instead (not to mention an upcoming role in the next Sisterhood of the Traveling Pants movie — Bledel, who's a producer on the film, says that the film is "moving forward," and that "we’re all excited about it"). Don't count out a return to big TV roles, though — Bledel says she auditions for pilots frequently, and is just waiting for an opportunity that feels right.

"I just want to find something that I really like," she says, adding that picking a new show is hard because she was "so spoiled by Gilmore Girls."