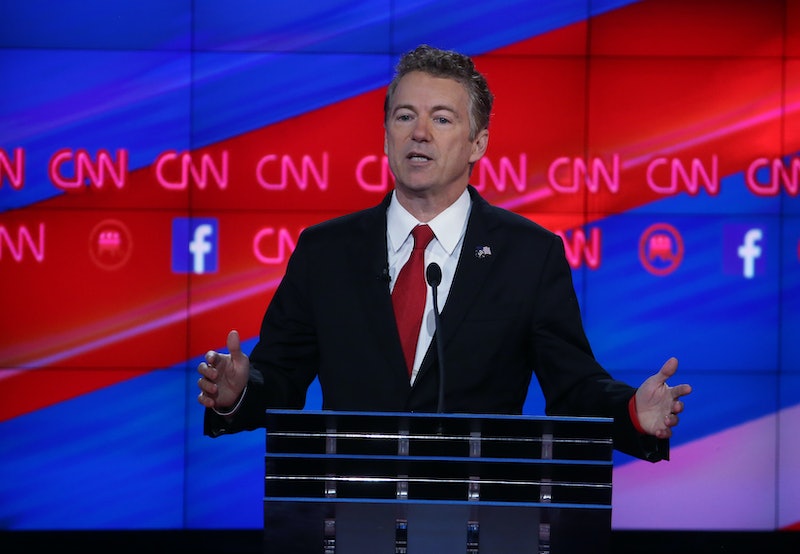 America survived yet another GOP debate — the last of 2015. Just like with the last four, there were two separate debates because of the unusually high number of candidates. The prime-time debate consisted of Donald Trump, Ben Carson, Ted Cruz, Jeb Bush, Marco Rubio, Chris Christie, Carly Fiorina, John Kasich, and Rand Paul. Many candidates had their breakout moments, but the pressing question is: Who won the fifth GOP debate?

Of course, people's opinions on this subject will vary, as "debate winner" is a very subjective title. It would be so much easier for everyone if there was some type of point system that clearly denoted a winner at the end, like in any sporting event. This basically is a sport — different players are competing and trash-talking one another, as voters watch at home and root for their favorite's victory. But since there is no such point system, the winner has to be chosen based on who stood out from the pack, didn't make any destructive mistakes, and will likely gain polling points based on their performance. For those reasons, Rand Paul won the fifth GOP presidential debate, which is actually pretty surprising.

Paul has struggled in the polls since entering the race, but now has the opportunity to break out as a viable nominee. While many of the top candidates (i.e. Donald Trump and Jeb Bush) attacked one another rather than answering questions, and others (i.e. Ben Carson) didn't make a whole lot of sense, Paul gave clear answers and sounded well-versed on the national security issues discussed — from toppling dictators to preventing World War III.

The chaotic debate was full of candidates talking over one another, the moderators unsuccessfully trying to make them wrap up their long-winded answers, and on-stage bickering. This will likely benefit Paul, as he managed to avoid the anarchy. Voters frustrated by the nonsense will probably appreciate that he focused on the real issues at hand. Paul got plenty of time to talk, too (more than Fiorina and Kasich), so he found the perfect middle ground between complete chaos and anonymity. This just goes to show that sometimes talking less can help you get ahead.

However, Paul didn't shy away from attacking his rivals when necessary, which proved that he can be authoritative if not overly pushy. When sparring with Chris Christie about no-fly zones over Syria, Paul brought up Christie's biggest scandal — Bridgegate — saying: "I think when we think about the judgment of someone who might want World War III, we might think about someone who might shut down a bridge because they don’t like their friends." He also said, "I think Marco gets it completely wrong," when talking about surveillance by law enforcement. Such comments set him apart from other politicians on stage by highlighting how his ideology and agenda differ — something many Republicans failed to do.

Paul is likely to see a rise in poll numbers after his successful debate performance, which would reaffirm the victory. Maybe he'll finally reach the double digits, though it's nearly impossible that he'll overtake Trump for the top position any time soon.