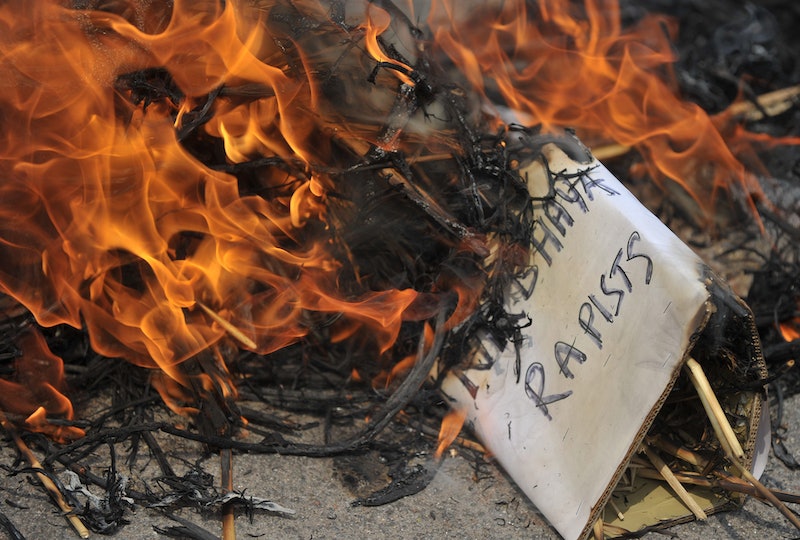 Three years ago, a woman named Jyoti Singh Pandey was brutally raped and beaten aboard a moving bus in New Delhi, India. Pandey and a male companion were offered a ride by men who were driving a privately chartered bus that they pretended was a public bus; the men then proceeded to savagely attack the pair. Pandey was raped by six men and assaulted with inanimate objects, and she sustained internal injuries so severe that 95 percent of her intestines had been destroyed by the time she was taken to the hospital. Pandey died from her injuries, and her story drew international attention to the problem of sexual assault in New Delhi, a district within Indian capital Delhi that the New York Times noted was described by some as "India’s rape capital."

Pandey's death became the catalyst for large-scale protests, activism, and other efforts aimed at protecting other women in India, a country long plagued by a sexual assault epidemic. According to a 2010 U.N. Crime Trends Survey, India ranked number three among world countries for number of reported rapes (the U.S. was number one), and according to a 2010 survey conducted by the International Center for Research on Women, almost one-quarter of Indian men surveyed admitted to committing a sexual assault — a higher percentage than in any other country included in the survey.

A culture that mainstreams rape apologist thinking and blames women for their own attacks is hardly unique to India, but many claimed that India's attitudes and laws regarding sexual assault were especially dangerous for women. CNN reported that "Most women in India — a country where a cultural stigma keeps many victims from reporting the crime — have stories of sexual harassment and abuse on public transportation or on the streets." Numerous women interviewed in the wake of the attacks reported that sexual harassment and feeling the threat of sexual violence were an everyday occurrence in Delhi. Sociology student Anupama Ramakrishnan told The New York Times that she blamed “a deeply held sense of patriarchy” for the attacks.

Three years later, numerous legal changes have been made in India, aiming at protecting women from sexual violence, encouraging people to file reports about sexual assault with the police, and punishing rapists. But have these new laws and regulations changed enough?

In 2013, following the Delhi attack, a bill was passed which aimed to better protect women from sexual and gender-based crimes including sexual harassment, stalking, voyeurism, violence committed with acid or other chemicals, and “disrobing.” These laws also expand previous definitions of rape to go beyond simply "penovaginal intercourse"; now, the definition includes insertion of object or any body part into a woman's vagina, urethra, anus, or mouth.

The bill also increased jail time for rapists, and introduced the possibility of the death penalty for serial rapists and sexual attacks that end with the victim comatose or dead.

The Justice Verma Commission, the panel that developed the report which led to these new laws, analyzed over 80,000 recommendations, consultations, and other laws from around the world, as well as significant research about sexual crimes. Female politicians and activists also played a crucial role, advocating for stronger anti-rape and anti-violence laws.

Still, some are opposed to the changes in laws. Indian politician Mulayam Singh Yadav said that the possibility of death penalty as a punishment for rape is unfair, and that boys "make mistakes."

2. Pandey’s Rapists Were Sentenced To Death

All six of Pandey's attackers were arrested and tried. Three of them plead not guilty. Four of the attackers were found guilty of rape and murder; one suspect died by suicide in prison in 2013, and the sixth was sentenced to three years in a youth center, due to being underage at the time of the attack. Though the four attackers appealed their sentence, it was upheld.

Many demanded the harshest punishment be given to these attackers, who were found guilty of murder as well as rape, saying that their receiving the death penalty sent a strong message that rape would be not be tolerated in Indian society.

If a woman wishes to pursue legal action after being sexually assaulted, she must file a complaint with the police. But some believe the Indian police force has created a “subculture of oppression” against rape victims in the past — even the Justice Verma Commission notes it. According to a report by Indian news magazine Tehelka in 2012, based on the magazine's interviews with 30 Delhi police officers, "more than half" expressed views about rape that were "prejudiced, misogynist, and shockingly insensitive to rape victims." Many of the cops blamed the victims or even made lewd comments about the victims.

This new legislation aimed to create a more open culture, where women can feel comfortable reporting a rape or attack without fearing that they will be blamed. A special women’s police division, which focuses specifically on helping “women in distressing domestic situations," has also been created.

4. More Support Is Available For Victims

Nirbhaya Jyoti Trust was founded by Jyoti Singh Pandey’s parents, aiming to both end sexual violence and stand by rape victims. They have used their family's devastation as fuel to work to prevent similar acts from happening in the future, and to help victims to receive necessary legal attention. The group offers financial support to victims, and works with politicians to attempt to create legal change for women and girls.

5. Women Are Fighting Back

After Pandey died, protests spread across Delhi, where people demanded justice for victims of sexual assault and rape. Her death spurred an anti-rape activist movement, which has taken many forms. Two women named Uppekha Jain and Pankhuri Awasthi formed BomBaebs, rapping against rape and sexism. A group called The Red Bridge brings together young assault survivors, training them in martial arts-based self-defense techniques and encouraging them to patrol their neighborhoods, demanding that men engaged in sexual harassment and assault stop — and, if necessary, physically intervening. They also offer self-defense training to girls and women. Though the group formed several years before Singh's attack, the group grew rapidly after her death.

Red Brigade member Pooja Vishwakarma reported to the U.K.'s Mirror that “A boy was taunting the girls, saying he could have sex with them whenever he wanted. We told him to stop but he didn’t. One day he did it again, so we grabbed him and hit him with shoes and fists. His friends were terrified and ran off."

Delhi Transportation Corporation now requires all of its bus drivers to attend “gender classes” and will install GPS devices on all of its buses in the future. Rickshaw drivers are also required to attend an annual one-hour class on gender issues, and many drivers are rethinking their behavior and thoughts after the training programs. Narotan Singh, a rickshaw driver who took the class, told the Associated Press that "The training made me and other drivers think twice about our behaviour towards our female passengers ... We should not judge women, but respect them."

1. Rape Rates Continues To Be High

Rapes across India have continued to occur at an alarming rate, despite these new laws and awareness. One hundred women are raped every day in India, according to a 2015 article in The Irish Times. Marital rape continues to be legal, and crimes against women have increased by 7.1 percent since 2010. Reported rapes are on the rise in Delhi — with nearly 1,813 reported rapes in 2014, compared to 1,441 in 2013.

These numbers also don't account for the many rapes that are reported and forgotten, or kept secret. A 2013 report by Girls' Globe estimated that 90 percent of rapes in India are not reported; this makes the actual possible numbers of sexual assault each year dismally higher. Even worse, when women aren't "registered citizens" (meaning that they do not have a passport, a situation that is common among the working class), getting help is even more difficult. A number of violent sexual assaults, similar to the 2012 attack on Pandey, have been in the headlines in a recent years:

2. Women Continue To Be Asked To Accept Violence As Normal

One of Jyoti Singh Pandey’s rapists publicly blamed women who are assaulted for “wearing the wrong clothes," a sentiment that was unnervingly similar to remarks made by Manohar Lal Khattar, the top elected official of Haryana state, in 2014: "If a girl is dressed decently, a boy will not look at her in the wrong way. Freedom has to be limited. These short clothes are Western influences. Our country's tradition asks girls to dress decently."

3. Many Feel That Education Is Not Enough

Manjunath Sadashiva, the director of the Children’s Movement for Civic Awareness, feels that the educational system may be of little help in dealing with the problem of sexual assault in India: “Our education system is not helping at all in removing the stereotypes in the society. It is not moulding or shaping young minds to be humane citizens.”

Writing in Quartz India, Saptarishi Dutta noted that "unless India manages to revamp its curricula and promote gender sensitization classes in schools, patriarchal attitude is likely to thrive. Harsher laws can do only so much."

While there has been some progress, much more needs to be done to halt the threats of rape and violence against women in India.

More education is necessary to help change attitudes about sexual violence. Women's rights activists have been calling on the government to spend more money and time educating people to prevent rape. Priya Nanda, director of Social and Economic Development at the International Center for Research on Women, feels that people do not engage enough with the broader issues at play where it comes to sexual violence in India; rather, she feels that people focus "time to time on a particular rape, then there's the diagnosis of that rape, and we move onto the next one."

"Laws alone cannot bring lasting change. Society needs to change their patriarchal attitude towards women," says Kamla Bhasin, an advisor at Sangat, a South Asian feminist network based in Delhi. While more effective arrests, increased police accountability, quicker trials, and harsher sentencing and punishments will eventually dissuade some potential rapists and set society-wide examples of how sexual assault should be dealt with, more needs to happen soon — to save the women and girls of India.