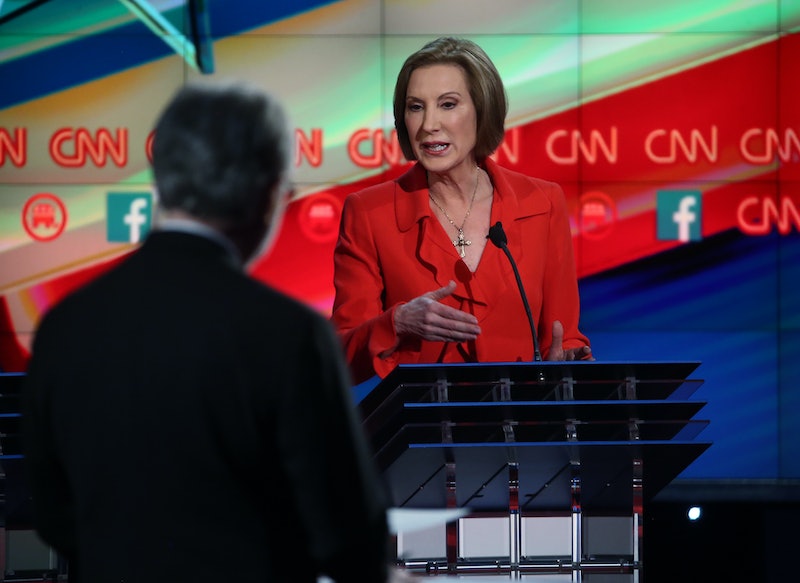 When Carly Fiorina entered the race for the Republican nomination, it seemed that the only platform she had was not playing the "gender card" and despising the other woman gunning for the highest office in the land. Her major talking points included hating Hillary Clinton and criticizing her for daring to mention that she is a woman. Admittedly, the former Hewlett-Packard CEO has developed a few other positions since then. But during the fifth GOP debate, Fiorina pulled the dreaded gender card, betraying her previous claim that she never would. Rather than making her relatable to female voters, this exposed her blatant hypocrisy to liberals who have been taking note and conservatives who trusted her to deliver on her promise.

As recently as last month, Fiorina was ripping Clinton on The View for what she perceived as using her gender as a basis for her candidacy:

I think Hillary Clinton has made a case for her candidacy based on being the first woman president. On the other hand, I would never ask people to vote for me just because I’m a woman.

This is a talking point that Fiorina has parroted repeatedly throughout her campaign — that Clinton's recognition of the fact that she is a woman is somehow indicative of her running on her vagina. So it was surprising, then, that Fiorina's debate strategy seemed to have turned right from her opening statement:

I have been tested. I have beaten breast cancer. I have buried a child. I have started as a secretary. I fought my way to the top of corporate America while being called every B-word in the book. I fought my way into this election.

Only one of those things is truly gendered, and I'd give you two guesses if I thought you actually needed them. I'm honestly scratching my head on how you could fill a whole book full of B-words, but there are two that come to mind fairly immediately which would certainly never be used to describe a male. Fiorina knows that, and bringing it up is putting an inherently feminine spin on herself.

But that wasn't the last time that Fiorina would allude to her lady bits. After listening to her male counterparts stumble over strategies to stop international terrorism, Fiorina offered a Margaret Thatcher quote as her qualification for stopping ISIS and the like: "If you want something talked about, ask a man. If you want something done, ask a woman."

That's a good burn as the only woman on a stage full of men. But it's also a pretty telling as to what you want everyone else to recognize sets you apart from the crowd.

None of this would actually be a problem if Fiorina hadn't vehemently sworn up, down, and sideways that she would never even think about being a woman whilst running for president. Rejecting femininity completely is saying that the unique perspective a woman holds has no value in the Oval Office. But that spark of newness, of possibility, is certainly something which people appreciate about Clinton (even though it's certainly not the limit of her qualifications, as Fiorina alleges). Assuming that a woman running for president is no different than a man is also assuming that sexism doesn't exist.

But Fiorina resigned herself to being politically androgynous — something that conservatives lauded as the admirable difference between her and grandma Hillary (who in this presidential cycle has walked back on a similarly gender-neutral 2008 campaign).

That's why this sudden shift doesn't seem like it would offer Fiorina many advantages in any case. She's alienating the conservative women who admired her for not playing the "gender card" and the liberals who scoffed at her for the same thing.