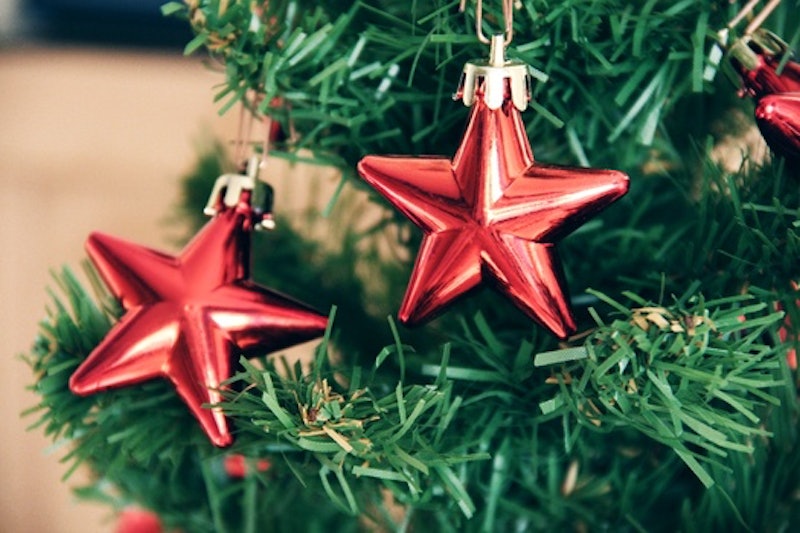 It's officially Christmas, which means the carols are getting progressively louder, the turkey is in the oven, and families everywhere are starting to have intense arguments about whose turn it is to put the star on top of the Christmas tree. But if you've been curious about the history of Christmas decorations, or you've ever looked at your tinsel and wondered whose idea it was to cover evergreen trees in glittery rope, cookies, mistletoe, and glass balls, then this is the article for you.

A lot of modern Christmas traditions come from the adapting of German rituals into English popular culture. This has mostly happened because Queen Victoria married the German Prince, Albert Saxe-Coburg, and was publicly delighted by the decorations (such as the Christmas tree) that he brought with him to celebrate the holiday season. It's the equivalent of your cousin marrying somebody who's vegan and then suddenly going on endlessly about how nut roasts have changed her life; except that Victoria was the Queen of England, and she was highly culturally influential. Some of our standard Christmas decorations, though, have much darker historical introductions into popular culture than the union of royals. In fact, a few of them have some pretty troubling pasts.

Here are five historical facts about Christmas decorations to help you look at tinsel, mistletoe, and some of your other festive favorites in an entirely new way.

Tinsel these days is just the cheap sparkle people throw on their trees when they need to cover up open spaces, but it used to be incredibly expensive ... and also deadly. Germany got a head start on tinsel (as they did with most Christmas-y things) when they started producing silver and gold tinsel in the early 1800s. But the real innovation that filled many American homes was the seriously shiny invention of lead-and-tin tinsel.

Up until the 1960s, tinsel used across the U.S. and many other countries was made of lead with tin bonded on top, and was often draped in "icicles" down trees instead of hung in strings. The obvious inconvenience of this material (namely, that lead is highly toxic) led to the FDA outlawing it by the 1970s. So your parents probably grew up with toxic Christmas trees.

It's not often that Christmas decorations have specific origin stories, but it's generally agreed that Lauscha, Germany, is the home of the world's first glass-blown Christmas tree ornaments. Lauscha was, and continues to be, a center of glass-blowing excellence. In 1847 the glassblower Hans Greiner produced the world's first fruit and nut-shaped Christmas ornaments, which were then painted with mercury or lead.

But Christmas ornaments aren't the only glass-related thing that Lauscha is famed for. Ten years earlier, in 1837, Lauscha glassblower Ludwig Müller-Uri had perfected an artificial, glass eye. His improved on earlier models because it could actually last and looked realistic. Imagine having that hanging on your tree.

Modern Christmas cookies, it seems, were based on a commercial failure. A London confectioner, Tom Smith, had absolutely no success in popularizing French-style "bon-bons" in the late 1840s, until he had the idea of making them crack when customers pulled the string that was placed inside the packaging.

The original mechanisms were marketed as "Cossaques," or Cossacks, which happens to be the name of a group of murderous soldiers who apparently rode around on horseback firing guns. How festive.

4. According To Myth, Oranges In Stockings Were Originally Gold Balls

The Smithsonian reports that the practice of hanging stockings by the fireplace on Christmas Eve, as well as the tradition of placing oranges inside of them, is wrapped in a folktale from Germanic tradition. It's most likely that stockings were filled with presents because they were convenient, not because of elaborate gifts by a visiting saint.

The folktale says that three beautiful daughters of an impoverished couple, none of whom could afford to marry, caught the attention of St Nicholas. Apparently, he crept down the chimney at night, found their stockings drying by the fire, and filled them with rich gifts to make up their dowry — which included a golden ball in the foot of each stocking.

5. Mistletoe Was Once Such A Big Deal That Bulls Were Sacrificed To It

The tradition of kissing under mistletoe is actually a pretty radical evolution from its origins in folklore. According to Roman historian Pliny the Elder, who quoted other Roman authors, mistletoe used to be such a sacred plant to druids in ancient Gaul (which encompassed France, Luxembourg, parts of Italy, and various other parts of Europe) that they sacrificed bulls to it.

According to Pliny, the Gaulic tradition involved finding mistletoe-covered oak trees (which are the trees where mistletoe commonly grows, because it's actually a parasitic weed) on auspicious days. They would then set up a huge banquet underneath it, and proceed to sacrifice and burn two white bulls. They also apparently believed that mistletoe was a good antidote for poisons and infertility. Unfortunately for them, though, mistletoe is actually highly poisonous.