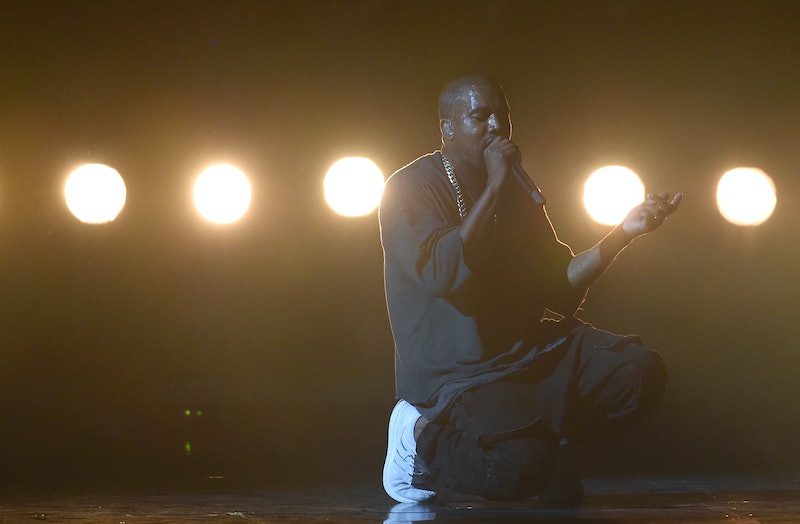 This news should "boost" the moods of fans of Yeezus' fashion offerings... at least for a hot second. Kanye West is releasing an all-black Adidas Yeezy Boost 750 sneaker. The 750 is his "OG" sneaker and was initially released in tan. These black kicks land on Saturday, Dec. 19 and they will come with a $350 price tag, according to Complex. Expect a (Taylor) swift sellout for the shoes, the existence of which has been rumored for a while.

Saint West's father has released black, grey, and moonrock versions of his Yeezy Boost 350. Of course Kylie Jenner was lucky enough to nab Boost 350s before anyone else because #family! The Yeezy x Boost family of shoes has pretty much been a shoe "event" in fashion.

Racked noted that the rapper's wife Kim Kardashian, as well as musicians The Weeknd and Travis Scott, have already been seen wearing these new 750 kicks. Racked also reported that Adidas and the designer have increased how many pairs of shoes they manufacture each time they release a new shoe.

That doesn't mean these shoes will be easy to get, though. In fact, I expect it to be next to impossible to get your hands (and feet!) on these babies.

That said, want to see the black Adidas Yeezy Boost 750 shoe? Hell yes you do! Adidas tweeted an image.

Yes, it's a bit hard to see, since it's black-on-black. But rest assured, the shoes will be as rad as they are difficult to get.

Oh, wait! It looks like the youngest Jenner sister just Instagrammed a pic of the black Yeezy 750s, too. The flap gives it away.

The fact that that all versions of the Yeezy Boost sneakers are so unobtainable only increases their "cult" status.

These are the original Boost 750 shoes, as worn by Yeezy himself.

Holy Yeezus! They are awesome, right?

Don't be bummed if you get shut out from Yeezy Boost 750 sneakers. You can still lace up fashionably with other pumped up kicks from Adidas.

The Extaball Up sneakers with floral print are way cute and can add a little patterned pop to an all-black or all-white ensemble. ($51, adidas.com)

The Superstar Up Two Strap Shoes are essentially chunky platform sneakers. They are embellished and artfully designed, so much so that they don't even look like regular ol' kicks ($66, adidas.com)

These Superstar Ups are pretty much fashionable wrestling sneakers with a vintage, '70s energy and a hidden lift. Crazy adorbs, right? ($90, adidas.com)

Sneakers are never, ever boring, thanks to Yeezy and to Adidas. While the Boost 750 will likely prove to be elusive, there are so many amazing options from the brand. So expand your horizons when it comes to your kicks and consider these other options.

More like this
Google Wants You To Shop Black-Owned The Friday After Thanksgiving
By Dominique Norman
The Best Heels For Bunions, According To A Podiatrist
By Margeaux Baulch Klein and Maria Cassano
Mejuri’s Big Black Friday & Cyber Monday 2022 Sales Are Not To Be Missed
By Allie Fasanella
The Best Black Friday 2022 Fashion Deals To Shop This Year
By Dominique Norman
Get Even More From Bustle — Sign Up For The Newsletter