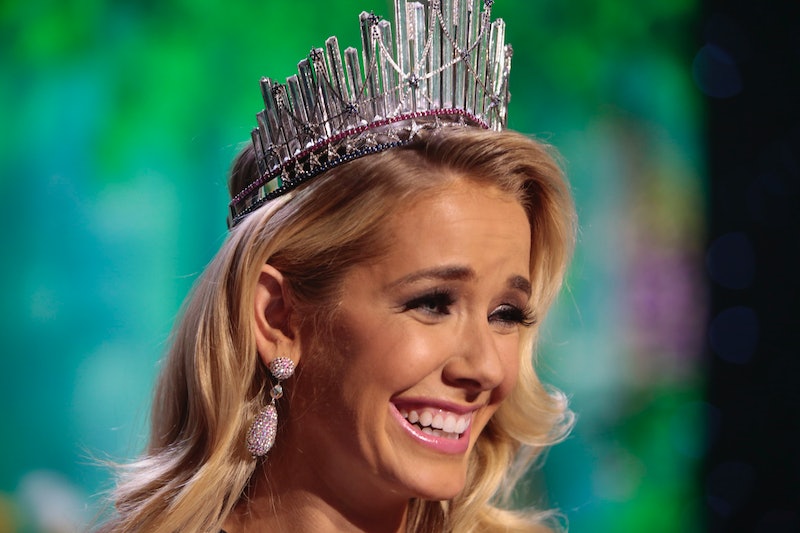 Olivia Jordan, Miss USA 2015 and contestant in the Miss Universe pageant on Dec. 20, is a self-proclaimed feminist and body positive pageant contestant. She studied Health & Science at Boston University, where she worked at the women’s resource center on campus. Now Jordan works as a personal trainer. It’s an industry, much like the pageant industry, not exactly known for body positivity, but she insists that her personal practice is less about #fitspiration and more about setting long-term lifestyle goals. "It's not about the number on the scale ever," she tells me. The 27-year-old Miss Universe contestant only started competing in pageants three years ago, when she moved to Los Angeles and realized it might be a great way to make friends. So, like many of us outsiders, she had her own set of stereotypes about pageants and the women who compete in them.

As the body positive and feminist movements gain traction in mainstream society, pageants find themselves in the crosshairs of the conversation: On the one hand, women should be allowed to do whatever they want without risking judgement from outsiders. On the other, there is no doubt that women being evaluated on how they look in a bikini by a panel is not helping to progress a society that still places importance on how a woman dresses, even if she’s running her own company. For an organization that claims its main focus is building self confidence, Miss Universe and other pageant organizations seem to foster an awful lot of pitting women against each other in order to compete for a sparkly crown.

Despite all the focus on appearance, as Jordan and I talk, she is quick to call out the success her fellow contestants have off the pageant stage. “So much of what you see is sort of this polished, final show,” Jordan tells me over the phone. “I’ve been surprised by how impressed I am with all the women I’ve met,” mentioning the lawyers, surgeons, and women who speak five languages who are competing alongside her for the title of Miss Universe.

If Jordan wins, and becomes Miss Universe, she'll become a full-time employee of the Miss Universe organization and will receive a year-long salary during her reign, which would be focused on charity work. In Jordan's case, she'd like to dedicate her time to charities that specifically help women. Think of it, if you like, as an excuse to take a helping-humankind sabbatical.

Putting women in this position of power can only be good for feminism. These pageants accomplish that, giving the winners an opportunity to take a year off from their everyday job to focus on being a positive feminist role model, if, like Jordan, they'd so choose. However, all is not perfect in the land of jewel-encrusted crowns. Even as we start to see a bit more racial diversity in the competitions — nine women of color competed in the 2015 Miss USA pageant and there are contestants from 85 countries in Miss Universe 2015 — women who fit traditional beauty standards are still the only ones front and center. Even the About Us on the Miss Universe website states that the goal for "every woman [to] have the confidence to stand up in any situation and declare, 'I am secure and that's what makes me beautiful!'" meaning that despite the Final Five question and despite all the volunteer work, the focus is still to strive for beauty. This, Jordan insists, is where pageants need to improve in the future if they hope to continue existing in our society, which is slowly (very, very slowly) becoming more body positive and size inclusive.

Jordan recognizes her inherent privilege as a tall, naturally thin ("I can sort of eat whatever I want, and I workout for less than an hour a day"), white, blonde woman, and understands how that might make her harder to relate to for the majority of humans. "I wish that more body types were more represented here," she tells me, noting that she does see more body diversity in the Miss Universe pageant than Miss USA, since society's arbitrary beauty standards vary from country to country. Perhaps there is a touch more diversity in the international events, yes, but if you peek at the official bikini photos for this year’s competition, it’s still all women with hourglass figures — likely none of whom would identify as plus size.

If the Miss Universe pageant wants to continue with its mission of building confidence in all women, the organization must stop rewarding only one type of woman. But, Jordan tells me, she thinks change is more likely to come from the contestants first. "The main thing that I tell anyone that asks for advice, whether they’re getting into pageants or have been in it for years, is just to be authentically themselves," she says. By that she means shying away from the trend of presenting perfectly curated lives on Instagram and during competition. "I think the trap is when people feel that they need to be perfect in order to have influence, but people respond so much more to women who are authentically themselves and flawed and beautiful in their flaws," Jordan continues. "If girls didn’t worry about putting out a perfect image, a perfect picture of themselves, I think we could shift the view of what it means to be a pageant girl.”

It's a lovely idea, but as far as leading by example goes... well, I suppose it might be hard to give off that "just your average girl" vibe on Instagram if your job requires you be in full hair and makeup at all times. Even this casual roommate selfie is about a thousand times more glamorous than anything you’ll see on my feed.

These candid moments are certainly a step toward breaking the "my life is perfect and yours is not" façade, though, as Bustle’s Marie Southard Ospina recently pointed out, the reactions to a thin woman holding up her favorite Oreo cookies (“so cute” and “real”) are likely to be a bit different to a plus size woman doing so (“that's unhealthy”). At least Jordan’s filtering doesn’t appear to be at maximum level.

But Jordan admits to me that she struggles to practice what she preaches. "I’ve had to sort of push myself to share my insecurities on social media," she says. But, just focusing on her Instagram, where most people store the "best" version of their everyday lives, there are at least a few kinda silly snaps sprinkled in among the professional shots.

As a pageant consumer, I want to support these women, just like I want to support all women. I certainly don't want to take away an opportunity that gives women more visibility in a world that so often offers them none. The Miss America organization is the top provider of scholarships for women in the United States, even though as John Oliver discovered, it doesn't give away nearly as much money as it claims.

We're left with an organization that's teetering on a fine line between assimilating into modern feminist society and spinning into total irrelevance. While she's prepping for the pageant, a contestant like Jordan gets blowouts and tests different types of spray on glue to see which will best hold her bikini in place. Though Jordan says she personally doesn't diet or increase the amount of time she spends at the gym right before a pageant, she does spend about an hour every day working out to "be at [her] personal best" and "feel good about myself" before she walks on the stage to be judged on her ability to pull off a form-fitting evening gown.

But then, using her Miss USA title and the pageant's name recognition, she spends her time as a spokesperson for organizations like the Alzheimer's Association or the Best Buddies organization, preaching words of equality for women and anti-bullying. Without having to worry about balancing a full-time job with nonprofit work, Miss Universe has the opportunity to spread a feminist message to people every day — and, judging at least by their followings on social media, people care what they have to say... even when they aren't wearing bikinis.

In fact, the Miss World pageant got rid of the swimsuit portion in 2014, but Jordan doesn't see a reason for it to be abandoned completely. "You see sort of empowerment when it comes to putting on that bikini and showing that this is who you are and this is what you look like and that you’re healthy and happy," she says. So for now, at least as far as Miss Universe goes, it seems like that fine line will continue to be teetered upon.