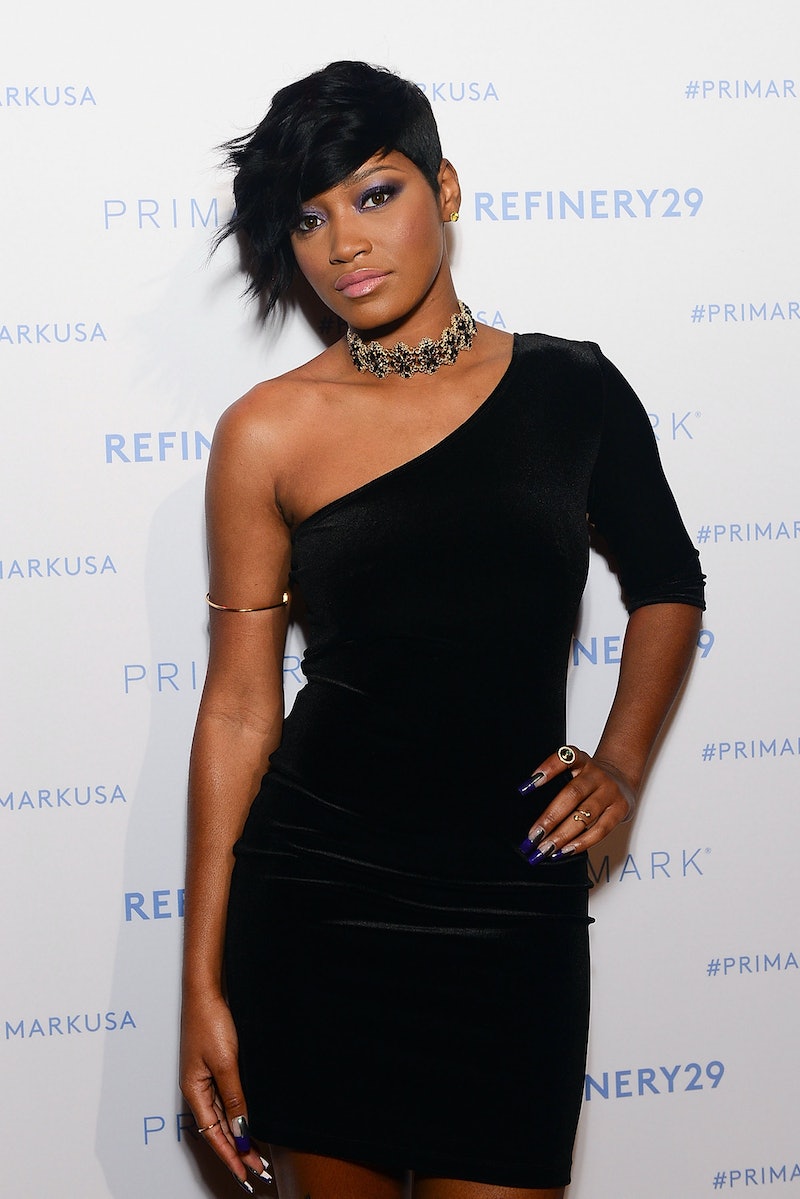 When she released the super hot music video for her single "I Don't Belong To You" back in October, Keke Palmer sparked a bit of controversy, but she's setting the record straight on people trying to define her sexuality based on what they saw in the video. Speaking with People, the former Nickelodeon star (and current star of Scream Queens) discussed the video and her burgeoning music career. Palmer says the video, which shows her walking out on a guy in bed, only to end up knocking on a woman's door at the end, should speak for itself:

The video was to represent the young woman today — it's not the traditional woman anymore — and not the specifics of "Am I gay? Am I straight? Am I bi?" I'm making the rules for myself, and I don't have to be stuck down to one label ... I don't feel the need to define nothin' to nobody, because I'm always changing. Why say that I'm this or that when I might not be tomorrow? I'm gonna follow my own feelings and my own heart.

The 22-year-old's take on sexuality is refreshing for so many reasons: namely, that the notion of subscribing to a label when it comes to ones' feelings or desires is pretty outdated and can end up making a person feel isolated and outcasted when they feel like they can't fit into a certain box or group. If one young person trying to find his or her own identity sees Palmer's words and feels a little less confused, then she's so much more than the label of "singer-actress" — she's an awesome role model.

And Palmer isn't the first star who has come forward declaring she won't be tied to a label when it comes to their sexuality.

The 23-year-old model and actress told The New York Times : "My sexuality is not a phase. I am who I am," after saying she was in love with a woman in Vogue. Delevingne was applauded for speaking openly about the topic, even though it's a little ridiculous that she even had to.

The Orange Is The New Black newcomer has spoken at length about being gender fluid, telling News Corp Australia: "I am very gender fluid and feel more like I wake up every day sort of gender neutral." She released a video in support of this, and said, "Whether straight, gay, bi, trans... body image and identity can be a struggle for us all." Sharing her feelings has won her lots of fans and is helping to break down the barriers for all of us, no matter how we identify ourselves.

Cyrus may be more known for her shocking onstage antics and her affinity for over-the-top outfits, but she should be celebrated for her dedication to helping those struggling with their identity and sexuality. She told TIME : "I’m just equal. I’m just even. It has nothing to do with any parts of me or how I dress or how I look. It’s literally just how I feel ... People try to make everyone something. You can just be whatever you want to be." She has also started a foundation, the Happy Hippie Foundation, which supports LGBT and homeless youth. I'm proud of Cyrus for using her celebrity and famous name for such a phenomenal cause.

The former child star turned View co-host has said some questionable things in the past, but her attitude towards labels when it comes to sexual orientation is totally admirable. She told Oprah Winfrey in a revealing interview that she's "tired of being labeled." She said, "I knew when I was, like, 12. I was looking at everything... I don't want to be labeled 'gay.' I want to be labeled 'a human who loves humans.'"

After her smash hit "Cool For The Summer" was released, people quickly asserted that she was referring to bisexuality in the song's lyrics. Lovato addressed the rumors on the British talk show Alan Carr: Chatty Man, bluntly saying: "I am not confirming, and I'm definitely not denying. All of my songs are based off of personal experiences. I don't think there's anything wrong with experimentation at all."

Stewart has been linked to both men and women, and addressed the wide-ranging speculation about her preferences in the September 2015 issue of Nylon magazine, simply saying: "If you feel like you really want to define yourself, and you have the ability to articulate those parameters and that in itself defines you, then do it. But I am an actress, man. I live in the f*cking ambiguity of this life and I love it."

Woodley is another young star who doesn't believe in labeling her feelings one way or the other. She shut down rumors that she'd had a romance with her Divergent costar Miles Teller by telling The Hollywood Reporter , frankly: "I fall in love with human beings based on who they are, not based on what they do or what sex they are." Preach!

Kesha told Seventeen magazine that she doesn't ascribe to labels when falling in love, and that she falls more for a "spirit" than a gender. She said, "I don’t love just men. I love people. It’s not about a gender. It’s just about the spirit that exudes from that other person you’re with." That's something we can all get behind.

Now that some of Hollywood's youngest and biggest stars have spoken out against labels, isn't it time we make 2016 the year where we stop trying to put people in boxes based on how they feel or who they love?

More like this
Spice Girls’ Net Worth: The Richest Member Is Wealthier Than The Rest Combined
By Hugh McIntyre
The 1st Photo Of Priyanka & Nick's' Baby Comes After 100 Days In The Hospital
By Jake Viswanath and Hugh McIntyre
'Heartstopper's Joe Locke Isn’t Here For The Speculation Over Kit Connor’s Sexuality
By Nola Ojomu
Doja Cat Needed Tonsil Surgery & Now She Can't Eat Taco Bell's Mexican Pizza
By Jake Viswanath
Get Even More From Bustle — Sign Up For The Newsletter