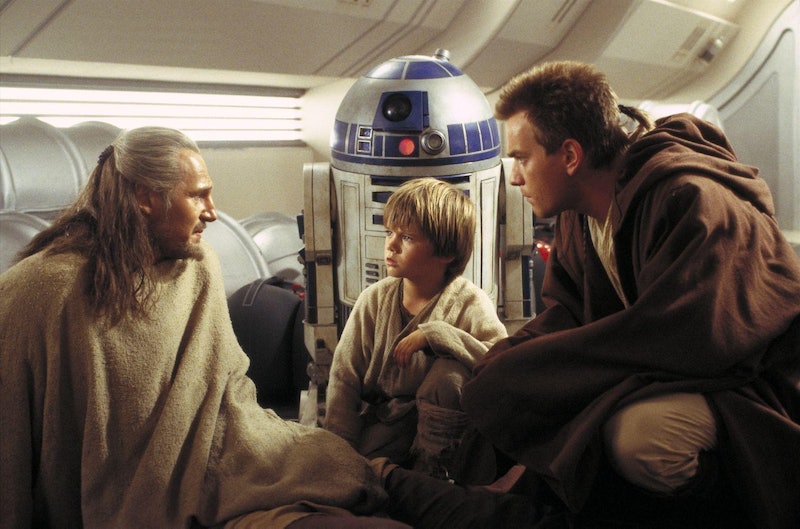 If someone offered me the option of watching any Star Wars movie, I'd pick Phantom Menace , the much-maligned prequel to George Lucas' beloved '70s/'80s films. The Episode I film is hated by just about every Star Wars fan — but not by me. I think Phantom Menace is the best Star Wars movie, and before you shake your head and click out of this article because, "What do girls even know about Star Wars?" (ugh, rude), and how dare I defend what many have called the worst of the series? Hold on. I'm certainly not going to say Phantom Menace is the best in groundbreaking special effects or acting or story. But, it's still my favorite because, honestly, it's hilarious and it had a lot of great moments in it. It's the film that introduced me to the series as a whole when I was eight and built a foundation for my love of Star Wars. And, it wasn't completely awful.

I think it's popular for a collective opinion to be formed and then everyone to go along with it and never question it again. Phantom Menace sucks, Beyonce is perfect, guacamole is delicious, etc. When anyone dares to challenge those statements, the public attacks them en masse. When The New York Times dared to suggest people add peas to guacamole, even President Obama dissed them for breaking the mold. But, even mass public opinions can be subject to change, people. We don't all have to believe that guacamole is perfect as is or that Episode I is the worst movie to ever be shown in theaters ever. (In a world where The Room exists, no Star Wars movie can be the worst one ever.)

I'm not saying Phantom Menace doesn't have flaws. Jar Jar Binks is a racist character and deserves all the flack thrown his way. BUT, that movie as a whole is not only not terrible, but it's actually pretty good. Cases in point:

1. Those Podracers Are Cool AF

That scene is long as hell, but I don't even care because it's epic. Sebulba trying to kill a child with a speeding junk-mobile? Perfection. It's a modern day Grease street car race, and everything from the scenery to the vehicles to the special effects are excellent. I could say that my brother and I never build podracers out of cardboard and scraps we found lying around the house and "raced" them against one another while making acceleration noises — but that would be a lie because we did it all the time. Podracers are awesome and right up there with the Millennium Falcon for cool Star Wars vehicles.

The people who criticized Jake Lloyd to the point that he quit acting all together are monsters. Kid is adorable and shouldered the incredible, challenging role like a champ at the age of 10.

Natalie Portman is too good for this world, and she was delightful in Star Wars. Let's all remember she was still in high school when she started filming that movie, and yet the grace with which she already carried herself as an actress was astounding. Also that hair, man. So good. Style envy 5ever because of Phantom Menace.

Speaking of style envy: This film made me want to own literally every piece of Padme Amidala's clothes. Princess Leia's buns are dumb looking, guys. Sorry not sorry. Meanwhile this ombre orange outfit was trend-setting and wonderful. Give me Amidala's two-toned lipstick over Leia's metallic bikini any day.

Amidala is queen of Naboo and she is so invested in her planet that she occasionally swaps places with her handmaiden so she can get her hands dirty in the affairs of her people. She was a strong leader and a dedicated public servant and she wasn't about to let her title or gender stop her from being in the action. Portman was fond of the character for the same reasons, telling CNN at the time, "They don't usually give women leadership roles. It's really good for girls to see that."

Before the crossguard saber of Episode VI, was Darth Maul's double-bladed saber which was both deadly, effective, and game-changing. It was the first saber to not be just a single blade and, man, was it cool.

Sorry BB-8, but these rolling Phantom Menace droids were epic. And, like, R2-D2 is cute and all, but his skills are limited in the pop-up force field capacity.

To this day I still quote this line whenever something goes wrong (find it at 5:55 in the video above). I'll give you that it's pretty bad acting, but that's what makes it funny. Also I don't quote anything from any other Star Wars movie ("Luke, I am your father" isn't even the right line) so...

I'm still not over Qui-Gon Jinn's death, OK? Obi-Wan Kenobi was old when he died, and at peace with it, welcoming it. But Qui-Gon was in his prime when he was forcefully taken from this world at the hands of Darth Maul. Pour one out for the OG Jedi.

10. Its Depiction Of Slavery

This movie dealt with some serious stuff like Anakin's and his mom's slavery. Bringing real world issues to a movie about space is a challenge, but one Phantom Menace met head on. Crying forever about Shmi.

11. It Introduced A New Generation To Star Wars

I was eight when Episode I came out. The prequel allowed me to access the series from the point of view of a character my own age in 9-year-old Anakin. Do most adults think Phantom Menace is dumb? Yeah. But, show the movie to a kid, and they'll love it. Episode I introduced a whole new generation to the franchise, and that's why it'll forever be the best, flaws and all.