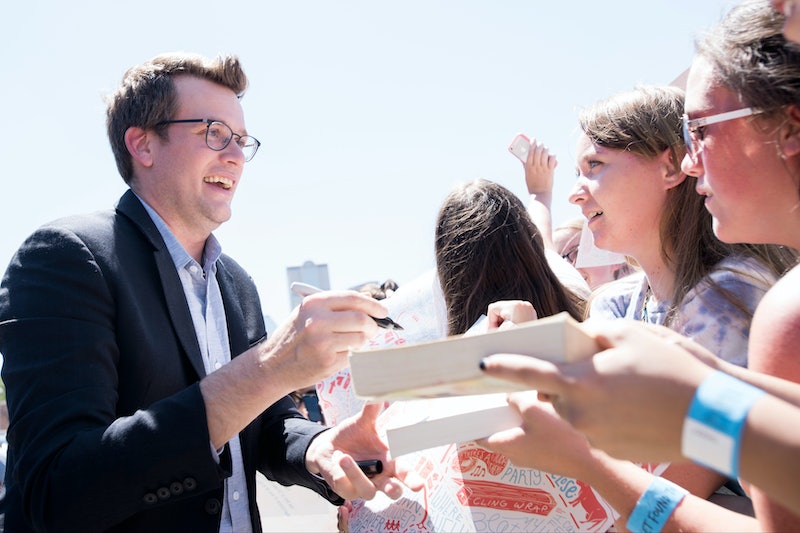 Having a hard time choosing which books to give your friends and family for the holidays? Want to pick great, diverse novels for the people on your list, but have no idea where to start? Well, worry no more, folks, because John Green's holiday book-giving guide is finally here, and it's full of great, intersectional reads for everyone on your list! Looks like Project for Awesome isn't the only fabulous thing Green is doing to make the holidays suck less.

We need diverse books, and by "we," I mean everyone. I think a lot of us would be unpleasantly surprised if we looked and just how few books we'd read by writers of color, queer, and non-male authors. And even if you read diverse books, that doesn't necessarily mean that your loved ones do the same.

Of course, the brilliant thing about the holidays is you can give your loved ones the books you think they should read, especially if the titles you give them aren't books that they would normally choose for themselves. I'm not saying that you should be an inconsiderate ass when you give someone a gift, but let's face it: If your Fox News-loving uncle can give your kid a Rush Limbaugh book every year, you can give him a copy of Al Franken's Lies & the Lying Liars Who Tell Them. Fair's fair, and it's the thought that counts, amirite?

It's highly likely, of course, that my reasons for wanting to give diverse books as gifts are different from yours. Maybe your child is trans* and you want to educate your extended family about trans* issues. Or perhaps you are of a different ethnicity than your partner, and you want to share part of your identity with your in-laws. Whatever your reasons are, Green's got you covered with his holiday book-giving guide.

Green recommends 28 books, 20 of which — a whopping 71 percent — were written by women. Many, if not most, of these titles feature LGBTQ+ characters, or were written by LGBTQ+ individuals. None of the seven male authors he names are white, and half of the books in Green's guide were written by authors of color. If you're looking for diverse books, this list definitely isn't shabby.

Here's a look at 15 of his best and most-interesting recommendations.

1. Between the World and Me by Ta-Nehisi Coates

Green calls Ta-Nehisi Coates' treatise on race in the U.S. his "favorite book of the year." Between the World and Me was definitely in my top five books of 2015, as well.

Paul Beatty's 1996 novel centers on a black surfer who moves to West L.A., where he starts to play basketball. Green puts this book in his "recommended to everyone on Earth category."

3. The Color Purple by Alice Walker

Green says Alice Walker's Pulitzer Prize-winning novel is great for your book nerd friend who thinks she doesn't enjoy classics. He also recommends Willa Cather's The Death of the Archbishop.

4. Are You My Mother? by Alison Bechdel

Fun Home author Alison Bechdel finds a place on Green's list with Are You My Mother?, a graphic memoir that combines family history with psychoanalysis and Virginia Woolf.

5. City of Clowns by Daniel Alarcón

Fun fact: Daniel Alarcón beat out Green in 1994 for top honors in their high school creative writing competition. City of Clowns comes recommended as a "brilliant story about a young journalist in Peru grieving his father."

6. The People in the Trees by Hanya Yanagihara

You might recognize Hanya Yanagihara as the author of A Little Life, which made this year's Book Prize shortlist. Green recommends both A Little Life and Yanagihara's first novel, The People in the Trees, which follows a doctor who eats a rare turtle in a bid for immortality.

Another Pulitzer Prize-winner on Green's list is Marilynne Robinson's Gilead. This novel is a fictional autobiography written for the dying subject's young son.

8. A Brief History of Seven Killings by Marlon James

Marlon James' A Brief History of Seven Killings beat out A Little Life to take home this year's Man Booker Prize. This sprawling novel wraps itself around a 1976 attempt on Bob Marley's life.

9. Falling in Love with Hominids by Nalo Hopkinson

Sci-fi author Nalo Hopkinson is one of three writers to get two nods on Green's list. Falling in Love with Hominids is Hopkinson's latest collection of short stories.

Reza Aslan is pretty great. Green calls his sweeping history of Islam, No God but God, his "favorite" book among its peers.

11. The Boy in the Black Suit by Jason Reynolds

Jason Reynolds' brand-new YA novel centers on Matt, a motherless teen who takes a job working at a local funeral parlor in order to support himself and his alcoholic father.

If you're in the market for a present for a sports-loving teen, consider Matt de la Peña's Ball Don't Lie. It's the story of a foster teen whose only hope at a good life might be his talent on the court.

For YA readers who might have missed out on the bountiful crop of mid-'00s teen novels, Green recommends Speak by Laurie Halse Anderson. The National Book Award-nominee centers on Melinda, a young high schooler who finds herself an outcast after she is raped by an older boy.

Jacqueline Woodson has a pretty amazing track record, and Miracle's Boys is no exception. Baby-of-the-family Lafayette is an orphan. Oldest brother Ty'ree is responsible for both of his younger siblings, now that middle brother Charlie's out of corrections. But Charlie is nothing like Lafayette remembers, and one weekend might change everything.

Last Stop on Market Street has been one of 2015's most-popular picture books. As they take the cross-town bus, young CJ asks his grandma to explain why he doesn't have the same possessions, or live in the same neighborhood, as other children. Green says it was one of his son's favorite books this year.