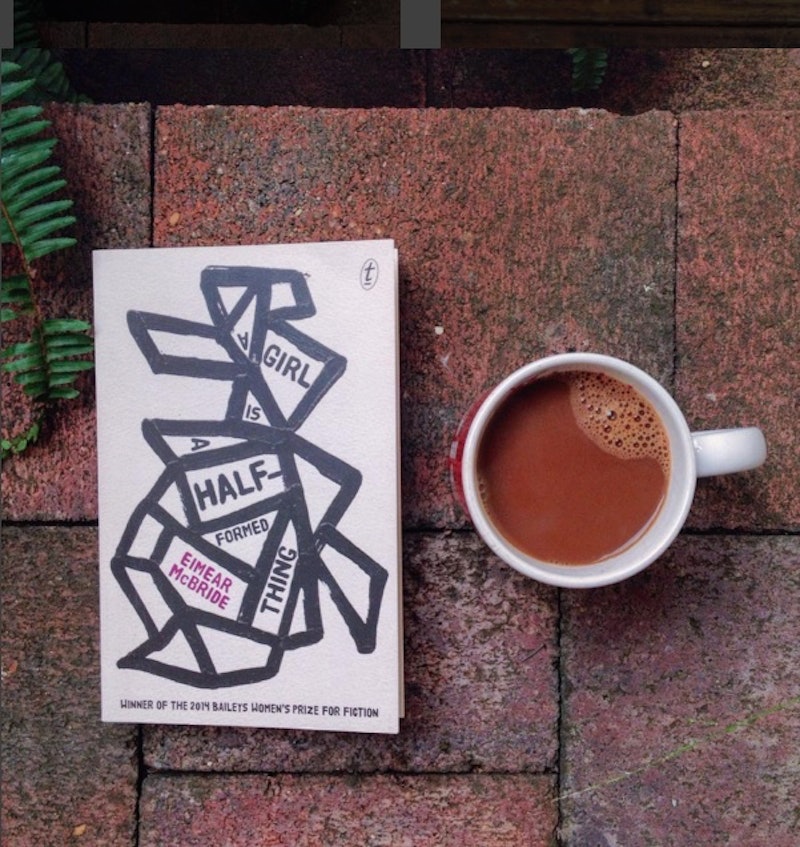 Any conscientious member of a serious book club — you know, the kind filled with folks who actually read the books in addition to drinking the wine and eating the snacks — knows the kind of pressure that arises when it suddenly becomes your turn to select the next book club read. Sure, you want to choose a title that everybody (or at least as many people as possible) are going to enjoy, but more importantly you want your book selection to be one that your book club won’t be able to stop talking about. That is why you’ve all gathered together, after all.

When I read Eimear McBride’s debut novel, A Girl is a Half-Formed Thing — already a winner of British literary awards the Goldsmiths Prize and the Geoffrey Faber Memorial Prize, and nominated for the Baileys Women's Prize for Fiction (which she later won) — the first thing I thought was: “I wish I had someone to discuss this book with.” At a slim 240 stream-of-consciousness-filled pages, enveloped in some Picasso-esque cover art, A Girl is a Half-Formed Thing is not your average debut novel; unless your jam is really experimental reads (in which case, recommendations are always welcome.) A quick trip through the novel’s Goodreads review section will reveal that most readers either love the book, or hate it — thereby making it the perfectly polarizing read for your book club to banter about long into the evening.

Here are six reasons why Eimear McBride's A Girl is a Half-Formed Thing is the ONE book every book club should read this year.

If you’ve never suffered a book hangover before — aka, the side effects of having read a book so intense you actually feel like you spent all night at Studio 54 with Liza Minnelli instead of at home, in bed, reading — then you might want to amp up the volume of your bookshelves a little. A Girl is a Half-Formed Thing is the perfect book-hangover-worthy read to start with. Although the novel centers around issues of mental illness, depression, sexual violence, and domestic abuse, these challenging topics alone are not what will leave you feeling bleary eyed and headache inflicted the morning after. No, the responsibility for that lies in McBride’s writing style — spare, disjointed, whirling, stream of consciousness prose that is so intimate at some point you find yourself locked within the character’s own minds, without even knowing how you got there. Read this with your book club, and you won’t be suffering your bowl of 9 AM chili-mac and cheese fries alone… or, you know, whatever it is you eat to get over a hangover.

2. It’s Been Awhile Since Those Wine-Fueled Debates Got Heated

Like I said, the Goodreads review section for A Girl is a Half-Formed Thing is filled with lovers and haters, and much fewer people who fall in between. Some of your fellow book clubbers are bound to love this book as much as you do, while others are probably going to hate it so much you start worrying about their blood pressure. Throw a few glasses of that obligatory book club wine into the mix and you’ve got yourself a good ol’ fashioned book brawl — the likes of which you haven’t seen since you were in graduate school. This is definitely not a Saturday night at Gertrude Stein’s Parisian salon.

3. The Punctuation Lovers Will Finally Have Their Say

As someone who has worked as a copy editor myself, and who hasn’t nearly enough fellow copy editor friends, I have come to know intimately the power of the semicolon. And the comma. And the question mark, or lack-thereof; and the sparingly-used exclamation point; and so on, and so forth. So I know firsthand the feeling of sitting in book club just dying to talk about the significance of an author’s punctuation choices (it really does matter, folks!) and having the entire room look at you like you’ve lost your mind. Well, get read to unleash your inner punctuation obsessive, because McBride’s punctuation choices are integral to the understanding of this book. They’re unconventional, experimental, a little bizarre, and possibly totally random — for once your fellow readers won’t be able to stop talking about them. Copy editors rejoice.

4. It Might Just Inspire You To Expand Your Literary Horizons

Don’t get me wrong, I totally gave into the book-club siren song that was Gone Girl, too. And in a truly well-rounded book club, everyone will kind of have their go-to faves: historical fiction or thrillers, mainstream novels or memoir. But after you all furrow your brows over A Girl is a Half-Formed Thing together, you might just be inspired to include a little more of the oft-neglected genre of experimental fiction into your monthly reads. Go for it, readers.

5. The Novel Is A Feat Of Literary Persistence

If you haven’t already heard the myth-like (but totally true) tale surrounding McBride’s publication, then you should know that while she spent only about six months writing the novel, it took her nine years of seemingly endless rejection letters before the novel was finally published. We should all take some time to celebrate the fruits of such perseverance — after all, how many of us would have certainly bottom-drawered our own manuscripts long before then?

6. If Nothing Else, The Book Really Is Just Kind Of Beautiful

Love what McBride is doing here or hate it, it’s still kind of hard to argue with the fact that A Girl is a Half-Formed Thing is a rather beautiful book. Sure, it deals with some really painful topics — violence, illness, identity, loss — but any story that can evoke such breadth of feeling with half the number of words and punctuation of a standard novel deserves some recognition. Haunting and curious, raw and devastating, visceral and beautiful, this whirling dervish of a novel definitely makes for a book club must-read.