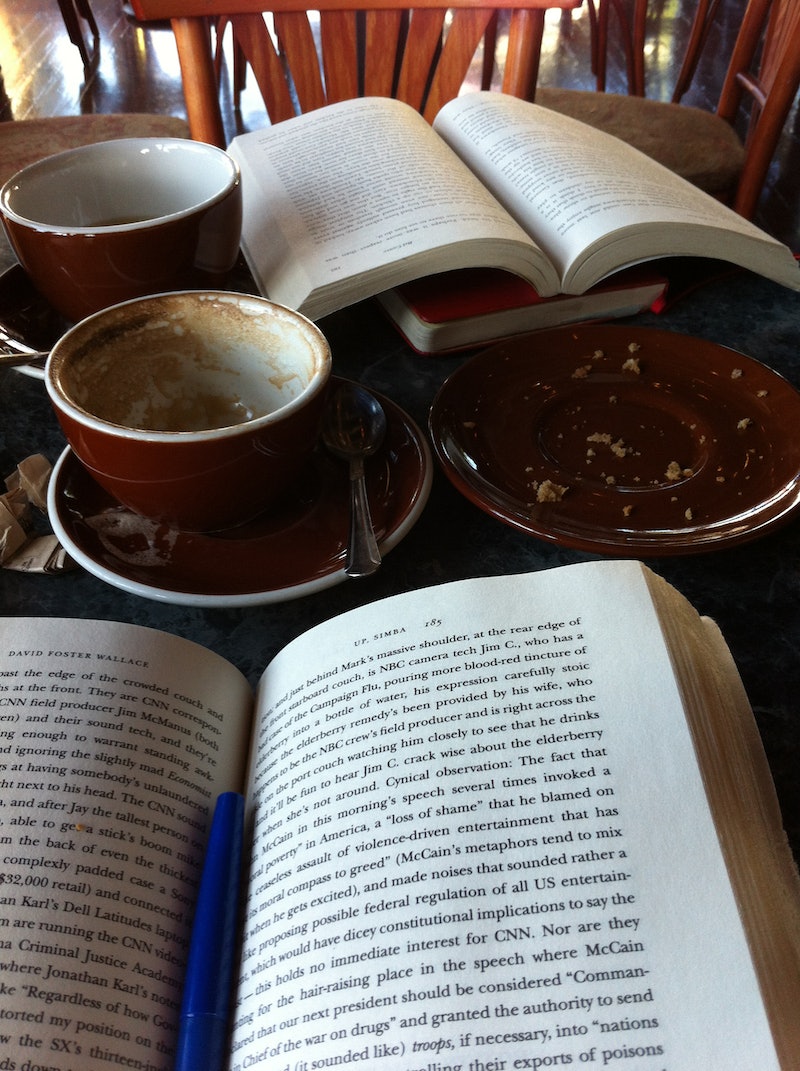 There’s nothing quite like the feeling of having just finished a totally mind-blowing, couldn’t-put-it-down, have-to-read-everything-else-this-author’s-ever-written book and realizing you have absolutely nobody to talk to about it. Sure, you’ve tried to invite others onto your book-lovin’ bandwagon... but your coworkers have started to flee the water cooler every time you approach, your mother stopped answering your calls after your 15th debate about Gone Girl, and even some of your less-literary besties have requested that you can it with all the book talk already. What’s a lonely book lover to do?

You, my friend, are in dire need of a book club — you know, your own personal one-stop-shop for some great plot discussions, motif analyses, metaphor debates, recommendations for further reading, and of course a whole lot of lattes. And what better way to recruit fellow bookophiles than with a list of truly cannot-miss book club-worthy titles to get your little literary gathering started? With all the great books there are out there to read, selecting your top book club picks might seem a little daunting at first, but don’t worry. I’m here to get you started.

Here are 11 books that every book club should read — even including several that didn’t make Oprah’s list (but totally should have). Read and rejoice.

The Empathy Exams by Leslie Jamison

Winner of the Graywolf Press Nonfiction Prize, Leslie Jamison's The Empathy Exams is a collection of essays that starts by exploring illness and injury from the perspective of a woman who worked as a medical actor — a job you probably didn't even know existed until now — and broadens in scope to discuss everything from incarceration and street violence to international poverty; all while commenting on the purpose empathy serves within human connections and relationships. This one will leave your book club with lots to talk about.

A Girl Is A Half-Formed Thing by Eimear McBride

Eimear McBride's A Girl Is A Half-Formed Thing is the kind of book that'll leave you with more questions than answers — aka: the perfect book club read. The highly experimental, stream-of-consciousness prose focuses on a story of mental illness, depression, sexual violence, and domestic abuse, and is told from the changing perspectives of each of the book's different characters.

The Museum of Extraordinary Things by Alice Hoffman

This novel was absolutely can’t-put-it-down mesmerizing. Speculative fiction, with a little adventure and romance thrown in for good measure, The Museum of Extraordinary Things will take you and your book club on a journey to early 1900s New York, where a man named Professor Sardie grotesquely weaves together fantasy and reality, at great risk to those around him. Alice Hoffman also manages to weave in conversations about immigrant rights violations, union worker politics, science, murder, and magic.

Nominated for the National Book Award in Poetry in 2014, Claudia Rankine's Citizen catalogues the instances of racism, violence, and police brutality that occur every day in the United States, and the effects that such racism has on both individuals and whole communities. She explores which communities are given an innate sense of belonging in the United States, and which are forced to fight for their sense of citizenship every single day of their lives. A timely read, Citizen will give your book club issues to discuss long after you've left your meeting.

The Hour I First Believed by Wally Lamb

The Hour I First Believed is everything you've come to love about Wally Lamb — he absolutely never fails to tell a complex, socially relevant, full-bodied, expansive, emotionally challenging story that'll take your book club to places you’d never expect. Lamb's latest book explores one community’s response to the Columbine school shooting, the country’s inability to react appropriately to tragedy, and the ripples bearing witness to such violence can have in individual lives even many years after the event.

You never knew gold mining in 1860's New Zealand could be so interesting. From such a strangely obscure starting point, author Eleanor Catton waves a story of violence and mystery, adventure and success, and a little astrology thrown in for good measure. The Luminaries is just a really fun, unique read — one you'll love discussing with all your best pals.

The latest read by much-celebrated Toni Morrison, God Help the Child , tells the story of one girl: Bride, and how her loveless childhood relationship with her mother proved to be a defining element in the rest of her life. Not only does this novel feature the kind of writing you've come to know and love from Toni Morrison, but it'll give you and your fellow readers a great opportunity to discuss your own mums over some wine — because that's always therapeutic, right?

My Ántonia by Willa Cather

Willa Cather's My Ántonia features the kind of book-club-friendly protagonist that you just can't ever get enough of. Ántonia "Tony" Shimerda is a daring and free-spirited Bohemian girl who moves with her family to Black Hawk, Nebraska, and develops an unlikely friendship with fellow prairie pioneer Jim Burden, a young orphaned boy who has moved to the great plains at the same time as the Shimerda family. The novel follows these equally compelling characters as their lives evolve into directions they'd never expect.

The Dive from Clausen's Pier by Ann Packer

This is a novel you and your book club will literally never want to stop talking about — so clear your schedules and prepare for an old school sleepover. 23-year-old Carrie Bell is about to end her engagement to high school sweetheart Mike Mayer, when Mike is suddenly paralyzed in a diving accident. When Carrie's obligations to him suddenly become too much to bear she shocks her friends and family by moving to New York to start a life of her own. Whether you love or hate the surprising ending of this story, The Dive from Clausen's Pier will definitely leave you with a lot to discuss.

Because you've all already read Bad Feminist and discussed it at great length, now you should definitely add Roxane Gay's An Untamed State to your book club reading list. When Mireille Duval Jameson is kidnapped in front of her family's home in Port au Prince, Haiti, she never suspects that her father won't pay the ransom demanded by her kidnappers and their leader, known to her as The Commander. When her father fails to come to her prompt rescue, Mireille suffers life-altering torment at the hands of her captor, and must ultimately learn how to keep her spirit strong and save her herself.