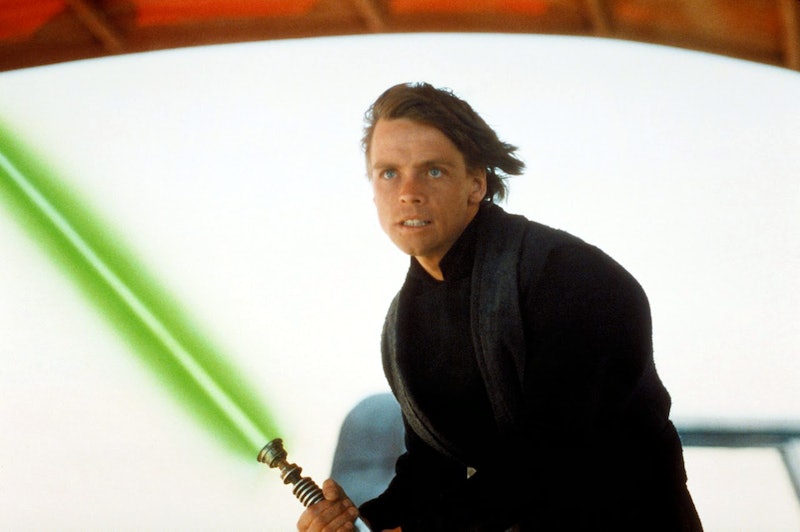 In the weeks leading up to its release, Force Awakens director J.J. Abrams made sure that no one knew the slightest detail about the new movie. The cast was hush-hush about the plot, and in some interviews, it even seemed that they were scared to talk about the movie at all. It makes me wonder what kind of crazy blood oath everyone had to take before signing on to be part of the film, but now that the movie is in theaters, all of our questions will be answered — well, maybe not all of them, but most of them. For one, everyone will finally find out what the movie is about, and get the answer to the million dollar question that has been on everybody's mind: Is Luke evil in The Force Awakens ? Spoilers ahead!

Rumors have been flying around for months in regards to his standing with the Dark Side, but as you will watch in the movie, Luke has not turned to the Dark Side — at least not that audiences know of, considering how infrequently he's seen. The whole movie is basically a game of "Where in the galaxy is Jedi master Luke Skywalker?" And if you're expecting to hear him speak in the movie, don't hold your breath.

He's the one familiar face that everyone's waiting for, but he doesn't pop up throughout the exposition of the movie —and there's a reason for that. It has to do with the story, but I also think that Abrams wanted to hold out on presenting him to the audience. He already gave fans Han Solo and Leia in the promos, and if he showed all three of the iconic characters at once, it wouldn't be special. Instead, in the film, Abrams takes his time in bringing the beloved character on screen, seemingly wanting fans to go through some obstacles before seeing their favorite Jedi knight.

Luke's presence is felt in the movie, but it is not seen (just like the Force) until the very end. And it's not because he's turned evil. Everyone is trying to find him after he has gone away into hiding because he, like Yoda, has decided to exile himself because he feels as if he has failed. As the last Jedi in existence, he was training someone to follow in his footsteps — someone in his bloodline named after his master, Ben Kenobi. Except he no longer goes by the name "Ben." He goes by the name Kylo Ren... and he is his nephew. Yup. Adam Driver's Kylo Ren is the son of Leia and Han Solo, and he has gone to the Dark Side. (Mind blown, huh?)

It is a surprise twist, but it's not a shock that the space opera is keeping things in the family. This way, more is at stake, and things get a lot more interesting. It turns out that the Force was strong with Ben, so Leia sent him to train with Luke. Ben was seduced by the Dark Side and became Kylo Ren (who, I'll add, is very sinister, with a bit of a bratty temper). Luke, meanwhile, went off the grid after feeling he failed — but apparently he wanted someone to find him, because a map was left behind to find his whereabouts.

At the end of The Force Awakens, the map is found and Rey, who is also strong with the Force, sets out to find Luke. She discovers him on an island, cloaked in a Jedi robe a la Obi-Wan. He turns around and she presents him with his old lightsaber. Not a word is spoken, and then it cuts to credits. How's that for a cliffhanger? The Force Awakens has set up a solid foundation to a brand new trilogy of Star Wars films that will make everyone forget all about Jar Jar Binks.