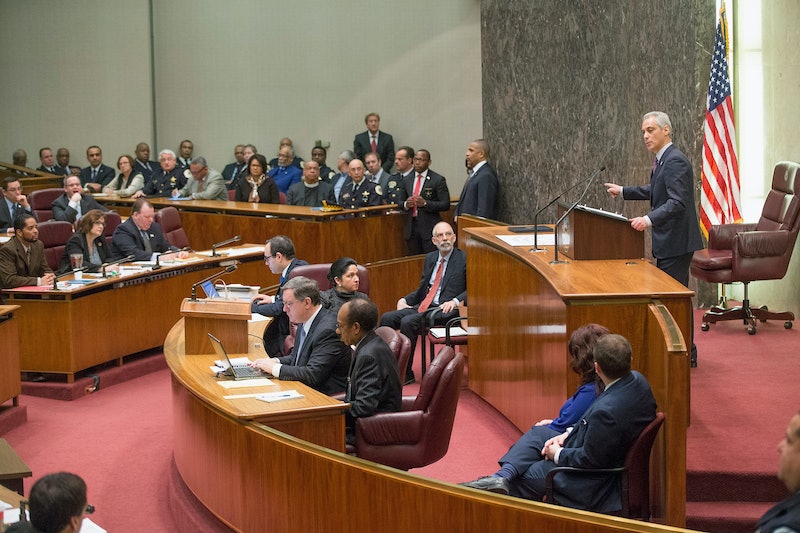 Complaining about local politics is one of the great American pastimes, and many Americans have perfected it to a high art — particularly in small towns, where the aisles of the supermarket are frequently clogged with people having heated discussions about the ins and outs of local policy issues over heaped shopping carts. Perplexingly, though, I find that those complaints are often associated with a disengagement from local politics — the people issuing the complaints are genuinely shocked that local politics aren't going the way they want them to, but refuse to actually participate and change that. I used to be one of those people — which is why I decided to change my tune this year.

The hands-down number one best way to participate in local politics is to show up at City Council meetings (these meetings may also be called Board of Supervisors, Planning Commission, etc, depending on the structure of your local government). Unfortunately, showing up at government meetings is one of the most painful and annoying experiences on Earth, but you're going to have to suck it up, buttercup — because if you have a problem with increasing taxes, unfair funding allocation, ugly buildings, weird uses of grant money, the sewer system, or any number of other local policy issues that impact your day-to-day life, you're going to need to bring your pretty little face to these meetings.

Bring your knitting. It helps.

I started going to City Council meetings after the establishment of a homeless services organization caused a political battle to brew in my city. Some people in the city panicked about the organization —which used certain grants for funding — which led to lawsuits, petitions, and, ultimately, a ballot initiative known as Measure U that could ban all social services in the area of town where the organization would operate.

The situation intrigued me as someone concerned with social services, particularly when a friend got in touch with me and asked me to support those arguing against any initiative to push social services organizations — like our domestic violence counseling center and disability services center — out of the downtown area. She said that in order to fully do so, I would need to show up at a City Council meeting — something I've done maybe three times in my life.

So I did. It was an extremely long meeting. There was some shouting and drama. And then, I started coming back, meeting after meeting, and sticking it out to the bitter end. It started out as a form of thumbing my nose at City Council, since several members made pointed comments about the low attendance, but it's turned into a strange obsession. The last meeting I went to stretched over four hours long, and covered scintillating subjects like whether four inch or six inch standpipes were preferable, sewer connections, and, perhaps appropriately, a preliminary discussion about applications for the kind of grants that were used to fund the homeless outreach organization. (Notably, none of the "concerned citizens" who had raged against the use of the earlier grant were present to share their thoughts on which grants the city should apply for.)

Though you might not guess it from the above paragraph, I'm learning some valuable things from attending City Council meetings — and not just in the sense that I have a much better idea of what is going on in town and how to intervene. It's showing me a great deal about civic disengagement. It's also increasing my frustration with people who complain about city politics, but make no move to change them.

Voter turnout in my last local election was pretty dismal, and people complained about the results. Many of those people hadn't bothered to submit ballots, which could have swayed those results in their favor. These people were also likely not attending any local meetings — the turnout, not just for City Council meetings, but also for the Safety Committee, Planning Commission, Public Works Committee, and other committees and agencies required to have public meetings, is pretty dismal. Which is unfortunate, because the people running these meetings really do want to residents to know exactly what is being discussed at them.

The agendas of City Council meetings are, by law, made publicly available. They can be found at City Hall, on the city's website, and at the library. Anyone can peruse them at will, and request the addition of an agenda item, in addition to submitting written or verbal comments to the City Clerk. Additionally, people can show up at meetings, request a Speaker Card, and speak for up to three minutes on any agenda item. In fact, at the start of the meeting, people are invited to comment on non-agenda items as well as consent calendar items.

In other words, people have ample notice of everything their City Council is doing. No one's trying to pull a fast one on residents. The City Council is making this information available and it's highly transparent — closed sessions are only allowed in very limited situations, like when the Council needs to have a legal consultation about pending litigation. They genuinely do want members of the public to participate, which is why they have a comment period. Council Members pay attention to what local residents say: I can personally attest to the fact that I've seen members change their opinions on issues after hearing from the public.

We often talk about politics on a state or national level and the need to get involved through voting, writing legislators, or even participating in demonstrations. What I don't see as often, though, is encouragement to actually head for City Hall and see what local officials are doing. If you care about what is happening in your community, if you're angry, if you're frustrated, if you want to take a City Council seat, you should do it. Only you have the power, friend!

Does it suck to go to City Council meetings that run for four hours (or longer), where even the Mayor is groaning with frustration when it's pitch black and frigid outside? You bet your bottom dollar. And it's even more grueling if you want to hit up other agency meetings on top of that — you could be looking at three or four meetings a week. But it's also totally worth it, because you get a first-hand chance to see what people are up to, to participate in it, and to challenge people who whine about local politics but can't be bothered to get off their butts and do something. Whether you actually care or just enjoy being smug, I urge you to make the same New Year's resolution I did last year: Show up to every City Council meeting, and see what happens.

More like this
Joe Lycett Just Took HIs David Beckham Qatar Protest To A Whole New Level
By Sophie McEvoy
Iran Has Issued A Death Sentence Over Mahsa Amini Protests
By Catharina Cheung, Darshita Goyal and Maxine Harrison
It’s About Time Black Girls’s Voices Were Heard – & 'Girlhood Unfiltered' Is The Start
By Paula Akpan
10 Thanksgiving Alternatives You Can Celebrate This Month
By Katie Mitchell
Get Even More From Bustle — Sign Up For The Newsletter