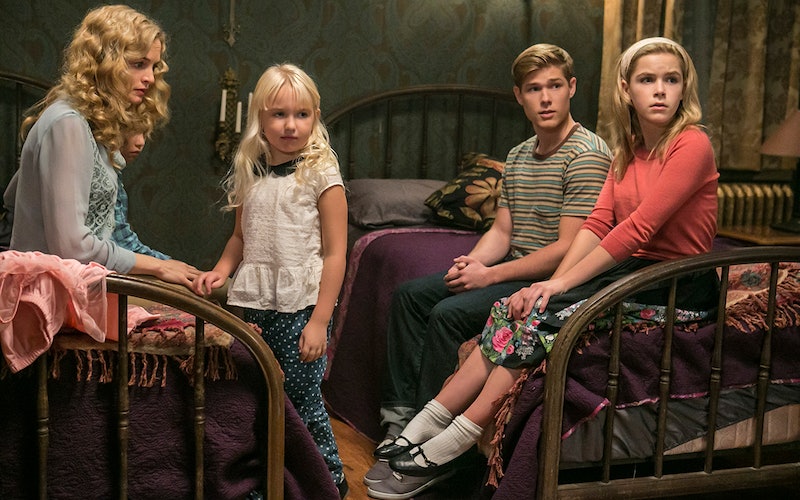 If you didn't watch Flowers in the Attic on Lifetime last night because you were watching the SAG awards, or because you simply had better things to do, don't worry, we've got you covered. The movie, which already has a sequel in the works is based off V.C. Andrews' controversial book about, let's just get it all on the table, incest. The book was turned into a film in 1987, but left out that very important plot point which is basically the entire theme of the novel. Lifetime wins in their remake for sticking closer to the book and honoring the author's original and twisted intentions of having the brother and the sister fall in love with each other. The channel is sure to catch some flack for showing the brother-sister pairing, but also this is 2014, so maybe not. In any case, here are the valuable lessons the Flowers in the Attic movie has taught us:

1. FAMILIES WHOSE NAMES ALL START WITH THE SAME LETTER ARE BOUND TO BE A LITTLE MESSED UP

If families like the Kardashians or the Duggars have shown us anything, it's that weird stuff goes down when everyone's names start with a similar letter. Those families picked "K" and "J" respectively, and this film was brought to you by the letter "C" for Corrine, Cathy, Christopher, Cory, and Carrie. While the Kardashians struggle with the terribleness that is being famous for next-to-no reason and the Duggars struggle with their desire to procreate like rabbits, the Dollanganger/Foxworths struggle with family ties. Corrine, the mom, played by Heather Graham, tries to poison her children, and Cathy (Mad Men's Kiernan Shipka) and Christopher (Mason Dye) can't keep their sibling hands to themselves. This movie has taught me not to follow in their footsteps and to give my children vastly unique names lest I accidentally start a cult.

2. NOTHING CAN GO WELL WHEN IT'S REVEALED THAT YOUR MOM HAS BEEN LYING TO YOU

About ten minutes into the movie Corrine drops the truth bomb that her children aren't who they think they are. "And one more thing," she announces. "Your name's not Dollanganger, it's Foxworth." She says this all very cheerfully, despite the fact that she's essentially telling her children, "And one more thing, your entire life has been a lie, hope you're okay with it yaayy!" Of course it takes her a little longer to reveal that they're the children of an incestuous relationship between her and her half-uncle. Word to the wise, if your mom tells you some deep lie about your family and it's not a fun one like in Princess Diaries, probably some bad stuff is gonna go down.

3. YOU CAN BLAME YOUR FAMILY FOR YOUR PROBLEMS

Cathy and Christopher struggle through much of the movie as they grow into adults with sexual desires whilst locked in an attic with no one but each other. Eventually they give in to those desires and sleep together. In the book Christopher rapes Cathy, but that's been airbrushed in the Lifetime movie and now it's totes consensual even if it is really weird. But they can't help their love for one another; their mom and dad were related, so incest runs in the family.

4. IF YOU DON'T WANT YOUR GRANDCHILDREN TO HAVE SEX STOP TALKING ABOUT IT

The creepy grandmother takes just about every chance she gets to remind Cathy and Christopher not to be "wicked" with each other. She has met them for all of seven seconds before firmly saying they are not to share a bed. At this point neither of them have had any incestuous thoughts about one another but the next six times the grandmother reminds them not to look at one another or not to let Christopher "use" Cathy probably started to at least put that thought into their heads as a possibility.

5. NO MATTER WHAT LIFETIME DOES, PEOPLE ARE GONNA HATE IT

Having seen some of the movies on Lifetime (Craigslist Killer, anyone?) I feel confident saying that Flowers in the Attic was actually good. I liked the acting. I thought Heather Graham nailed the vacant, vapid mother. Whether this was because she's a bad actress or she was really getting into character doesn't matter, her portrayal of Corrine was on point. And maybe it was because I watched the movie at midnight in the dark, but I was definitely a little scared when it ended. Since the movie is supposed to be a thriller, I think it did its job. Also it taught what I think is the most laudable lesson yet:

6. IT MADE PEOPLE WANT TO READ

Say what you want, but anything that encourages people to read is A+ in my book. (Haha, reading pun.)

So for that I think Flowers in the Attic was a success. Are you excited for the sequel, Petals on the Wind? It's supposed to be twice as depressing, which is Lifetime's forte, so I think it's safe to say they'll handle it well.