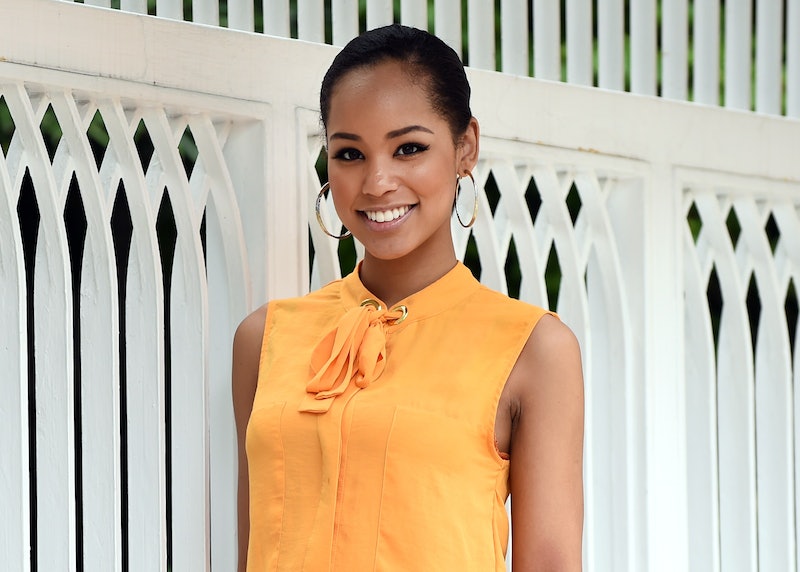 Growing up biracial in the United States, I spent years hearing the dreaded question, "What are you?" As a kid, I would answer in a meek tone that I was half white and half black. As a teen, I showed a bit of a rebellion and moved into my current response of forcing whoever I am talking to to be more specific. I know very well that in America the answer people are looking for isn't just "I'm American." But as Miss Japan 2015, Ariana Miyamoto explains, being biracial is definitely not the same experience everywhere and that in Japan, the implication behind a question like "What are you?" is even more intense.

"People call me a foreigner. They don't say black, white, just that I'm a foreigner," the 21-year-old says via phone, using a translator, only a week before the Miss Universe pageant on Sunday, Dec. 20.

As a mixed race American, people assume that you're American — well, when they aren't assuming you're from a Spanish-speaking country — but they want more: "Where are your parents from?" "Yeah, but what race are you?" In Japan, the issue isn't one of usually innocent curiosity like in the U.S., but one that stems from a nation that focuses on national identity above all else. Japan isn't the mixing pot that America is, so if you aren't 100 percent Japanese ethnically, you might not be considered, well, Japanese.

"I was born and I was raised in Japan, so I think I'm Japanese; however people call me a foreigner," she says, noting that she felt "uncomfortable" about this growing up.

The pageant queen is far from a foreigner. Miyamoto was born in Japan to a Japanese mother and African-American father who was in the U.S. Navy. Her parents split when she was still very young, and she was raised in Japan with her mother until high school when she moved to America for two years to live with her father's family. Of her time in the U.S., Miyamoto says:

When I was in the United States when I was in high school, people spoke many languages. [In the U.S.] people come from everywhere in the world, so they don't feel that you are a foreigner; we are just the same. But in Japan — I don't know if the country is just small, maybe they don't know the other world. They only know Japan and they speak only Japanese, so that's why they say I am the foreigner. But [in the] United States, no, we are just the same.

While Japan is much more racially homogenous than the U.S., the times are changing. Ninety eight and a half percent of the Japanese population, which totals 126 million, is ethnically Japanese. But according to the Japanese Ministry of Health, Labor and Welfare around 36,000 children with one non-Japanese parent are born each year, or about three percent of total births. And with the country's population on the decline, this is even more significant. Projections show a decrease of 40 million people in Japan's population by 2060. Jeff Kingston, the director of Asian Studies at Temple University in Japan told Al Jazeera, "Over the last 20 years, there has been a doubling of the percentage of the population that’s foreigners. One out of 30 Japanese babies who are born has mixed parents."

The way mixed raced people are viewed in Japan is perhaps best shown through Miyamoto's reason for getting involved in pageants in the first place. She did not compete before this year when she won Miss Japan, and she says that her reason for entering the pageant was because a biracial friend of hers committed suicide. The friend had become depressed due to the constant focus that was put on his race and the bullying he received because of it.

"My friend was half and because [he was] half, people bullied him, and he was very depressed because of this reason," she says. "So that's why I wanted to do this, because of him, to show how we're beautiful even though we are half."

Miyamoto says "half" so often, rather than "mixed" or "biracial," likely because in Japan the word used for people who are half Japanese and half another race is hafu. It's a word she's used to — and she's said in the past that it's necessary "to explain who you are" in Japan — but she's hoping that the descriptor will no longer be needed in the future:

What people called me since I was a little one is hafu. I'm used to this word. I hope in the future people don't call me hafu anymore. I just want people to open their eyes to see in the world what's happening, so I prefer not to hear this word in my future.

It's clear that Miyamoto wants to be black, Japanese, and mixed all at once, but in Japan she's just seen as hafu, or worse, as a foreigner. But that doesn't mean she doesn't have Japanese supporters. The Miss Universe contestant often posts about the support she receives on social media. She says that other contestants in the Miss Japan pageant, as well as their parents, thought she was brave.

And she was. In a country where her friend was lead to suicide because of the way he looked, it's not hard to see why entering a contest based primarily on physical appearance would be a bold move.

Miyamoto didn't win Miss Universe, but she did well. Even though she might not have that crown to open doors, she wants to continue her mission of bringing the way national identity is viewed into question — something that is far from your stereotypical pageant contestant message. Winning, she says, could "give more hope" to other biracial Japanese people and would also give her a bigger platform to "challenge" the way people see race or ethnicity. Miss Philippines might have taken home the win (after a very awkward moment when host Steve Harvey erroneously announced that Miss Colombia had won) but Miss Japan's placement in the top 10 has surely opened some people's eyes.

Talking to Miss Japan made me think about my own identity and the way ethnicity is viewed both in the U.S. and around the world. Like her, I have an array of things that I am and that I want to be: black, white, mixed, African-American, Swedish, German, American. I am all of these things at once and none of them cancel out the others. Regardless of whether you're multiracial or not, I think the desire to not be pegged down as one thing is something almost anyone can relate to.

While it might not seem that way at first, Miyamoto's message is a pretty universal one — and one that regardless of Miss Universe's outcome, I'm sure she'll continue to spread for years to come.