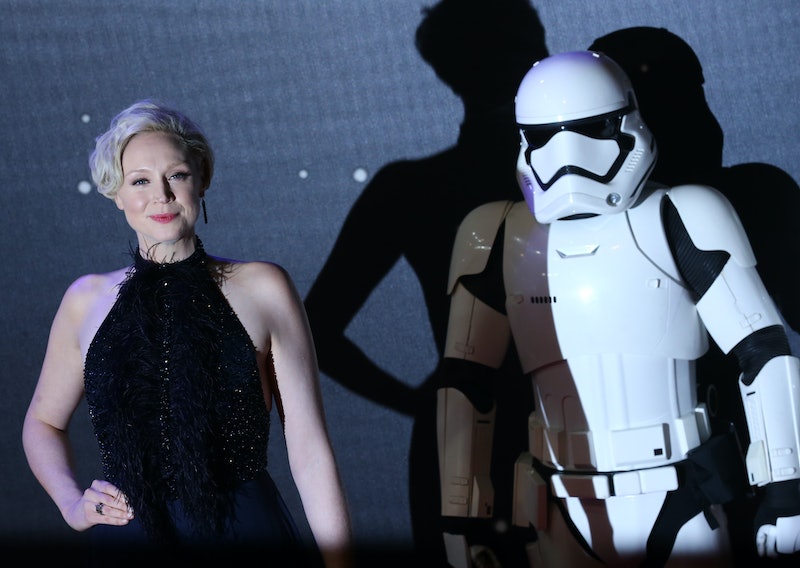 Star Wars: The Force Awakens is pretty much everything right now, and as such, the red carpet premieres have been straight-up glorious. Between red carpet queen Lupita Nyong'o and newcomer Daisy Ridley, the newest film boasts quite a stylish cast — I mean, come on, did you see John Boyega's purple tuxedo? Among the best dressed, of course, is veritable fashion girl and Game of Thrones star Gwendoline Christie — she's stunned at just about every red carpet appearance, wearing everything from frothy Oscar de la Renta to ultra-sleek Giles.

It's all pretty exciting, especially given her landmark turn as Captain Phasma (she's the first female villain in the Star Wars universe!), and the accompanying absolutely bad-ass armor. Interestingly enough, it turns out the part was originally written for a man, but according to Vulture, co-writers Laurence Kasdan and J. J. Abrams were inspired to gender-flip the role following well-founded complaints that the film didn't feature enough women — and as a result, Christie and Nyong'o were signed as cast members soon after.

Suffice it to say, there are a lot of reasons to look forward to meeting Captain Phasma — and Christie's on-point fashion sense is certainly one of them. So, with that in mind, let's take a look at some of her best red carpet moments of the Star Wars press tour!

In Oscar de la Renta at the Los Angeles Premiere

Only Christie could take bowed and bridal Oscar de la Renta and make it look this edgy-fabulous.

In Giles at the London Premiere

Absolutely stunning, and the feathers on the high neckline are nothing short of fabulous (also, posing with Storm Troopers should become mandatory on all red carpets from here on out).

Good to see that Christie is every bit as capable of metaphorically slaying on the red carpet as she is of (SPOILER ALERT) literally slaying Stannis Baratheon on the battlefield, no? Here's hoping we see even more of her triumphs as the Star Wars roll-out continues!