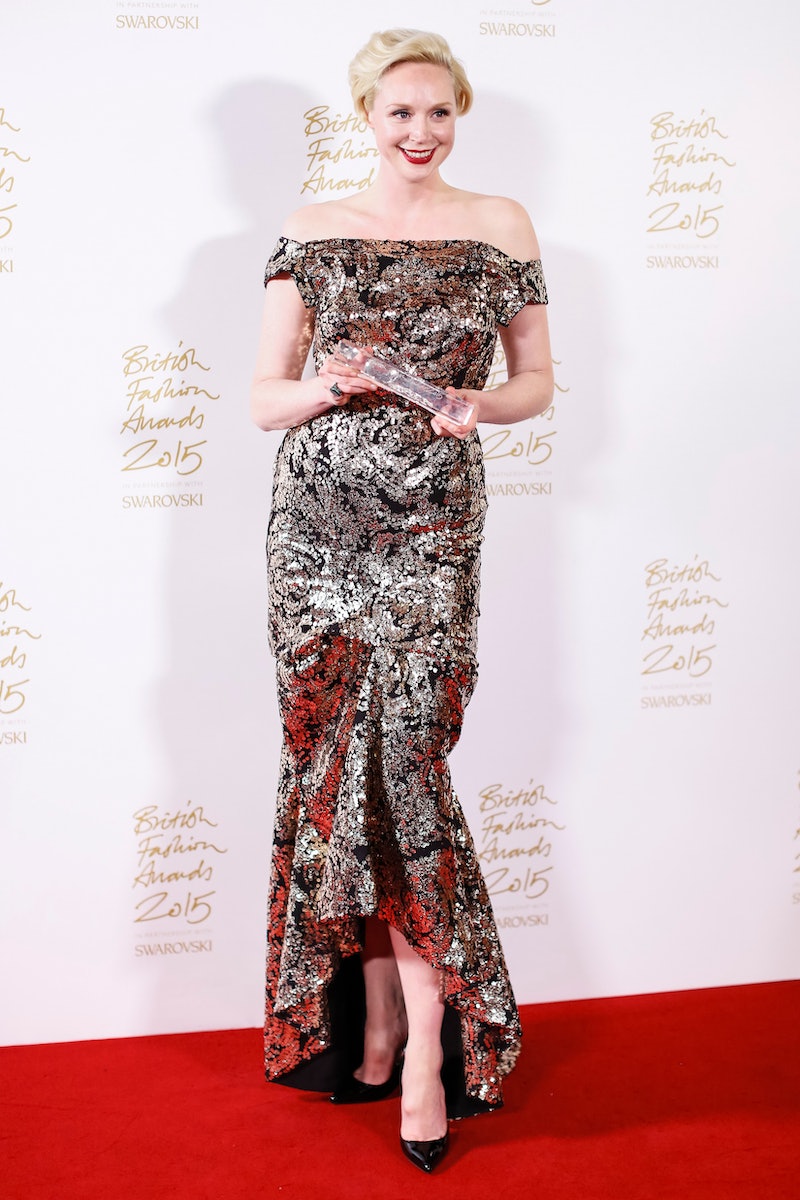 Well this is some good news! Gwendoline Christie was honored at the British Fashion Awards for her unique style, and I say it's about time she got some recognition. Best known for her role as Brienne of Tarth in Game of Thrones — obviously she's done a heck of a job, because I don't even watch Game of Thrones and even I am emotionally invested in Brienne — Christie's career has really taken off. In addition to her growing acting resume, including an upcoming role in a certain mildly popular franchise, her unique look has earned her a spot on the catwalk at Paris Fashion Week. Her award recognizes her collaboration with Vivienne Westwood on the designer's recent gender-neutral campaign, The Telegraph reports.

Of her relationship with fashion, Christie told Vogue that she's always been "obsessed". "I’d do whatever I could to get hold of Vogue, Elle, U.S. Bazaar, " she said. "and I would explore those magazines and test myself on who the designers were from about the age of 12."

Christie, who stands over six feet tall, cuts a striking figure, and she favors roles that use her look to subvert stereotypes. "I think it would be really revolutionary for someone to cast me as something conventionally feminized and very sexual and dark," she mused to the publication. "I'd love to play a very destructive narcissistic character, I’d like to play a sexual predator, a lawyer, a politician, a salacious journalist." I don't know about you, but I would totally throw my money at a project that starred Christie as a skeevy lawyer, say in the style of Hogarth.

Until such a project materializes, let's take a look at what Christie wore to accept her Red Carpet Style Ambassador award.

You can never go wrong with sparkles, amirite?

Here are some of my favorite looks Christie has rocked on the red carpet.

I love the contrast of Christie's lacquered waves with the flowing silhouette of her gown.

2. Flamingos (Because Why Not?)

Is there anything to say about this gown other than incredible?

The pleating on the skirt of this gown is unique and super cool.

I am so close to figuring out what's printed on this sheath dress. Until I do, I dig the colors and how they suit Christie's alabaster complexion.

I repeat: can you ever go wrong with sparkles? No, you can't.

I love how this dress plays with knits and texture.

An uncommon silhouette with an awesome print.

More like this
Here Are All 703 Outfits Rachel Wore On Friends
By Kat George
Dua Lipa On YSL Beauty, Plus Her Fearless Approach To Hair & Makeup
By Erin Stovall
Behold: The Wildest Fashion Moments of 2022
By Dominique Norman
Olivia Wilde's Best Red Carpet Looks Include Sequins and Plunging Necklines
By Dominique Norman
Get Even More From Bustle — Sign Up For The Newsletter