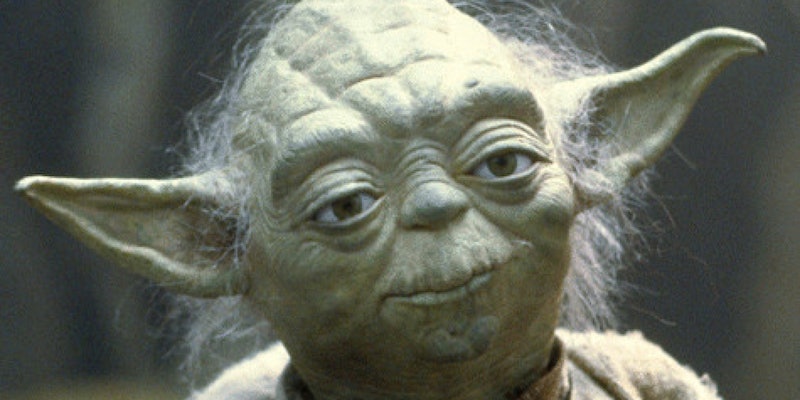 Because many beloved Star Wars universe characters, like Luke Skywalker, Han Solo, and Leia Organa appear in Episode VII: The Force Awakens, naturally fans are wondering what other favorites might pop up. It's 30 years after the previous film in its timeline, so plenty of the characters are likely still alive. It’s totally possible that Lando Calrissian or Mon Mothma are still around and could make an appearance, for instance, as well as characters like Admiral Ackbar and Nien Numb. But what about everyone's most favorite creature of all? Is Yoda in The Force Awakens ? Spoilers ahead!

Unfortunately, no, although it'd definitely have been possible. Though Yoda has passed on in the Star Wars universe, fans know that Jedi are sort of, shall we say, absorbed by the Force and can appear to those still living in a ghost-like form. Obi-Wan Kenobi appeared to Luke in The Empire Strikes Back to offer guidance and support as he trained with Yoda, and Obi-Wan was joined by Yoda and Anakin Skywalker (Sebastian Shaw in the original ending, Hayden Christensen in the enhanced rereleases) at the end of Return of the Jedi as a sort of “We are all at peace” message for Luke. So it's known that Jedis who have passed on can reveal themselves to others but sadly, The Force Awakens does not feature ghost Yoda or any of the other possible Jedi spirits.

The one instance of possible Jedi influence in the movie is when Rey has a vision while she, Han, and Finn are visiting Maz Katana. Much like Luke’s vision of Darth Vader during The Empire Strikes Back, Rey’s vision includes many images of things that induce fear. There’s the sound of a girl screaming, then shots of Rey as a young child being taken away from her family. She sees the now familiar shot of Luke Skywalker as he rests his robotic hand on R2-D2. Then, as Rey runs through a forest, a deep, mysterious voice says her name. It’s not deep enough to be Vader or Kylo Ren. It doesn’t sound like Luke or Han. You know who it did sound like, though? Obi-Wan Kenobi. I could have sworn that the voice saying “Rey” was that of Alec Guinness, Jedi master of the past calling to a Jedi of the future. I could be totally wrong, but whose voice do you hear? Let's see if we can all figure it out over multiple viewings of this movie.

Although it does seem impossible. Guinness passed away in 2000, but there is enough technology in the filmmaking industry that not only could his voice have been replicated in some way, but it also wouldn’t be impossible to use his likeness should Obi-Wan ever need to appear in his Jedi ghost-like form in future films.

But it’s not surprising that neither Yoda nor any of the other Jedi ghosts truly appear in The Force Awakens. Rey is only just beginning to learn that the Force is in her and that she could one day wield Jedi powers. It wasn’t until Luke had taken it upon himself to pursue Jedi training that Obi-Wan revealed himself, and though Rey advances rather quickly in her knowledge of the Force, she hasn't arrived at that point yet. Luke also suffered a great loss when Obi-Wan had died at the hands of Darth Vader, and until the end of The Force Awakens, Rey doesn’t experience the same trauma. The loss of Han Solo, though, her only father figure, may trigger her ability to converse with Jedi masters beyond the grave.

So perhaps in the upcoming two films, Episodes VIII and IX, Yoda, Obi-Wan, Anakin, or maybe even Han Solo, might reveal themselves to Rey as she learns more of the ways of the Force. All are possible (albeit some likelier than others), but the most logical Jedi ghost to appear would be Yoda. And who doesn’t want more Yoda, right? Put him in Episodes VIII and IX, you must.