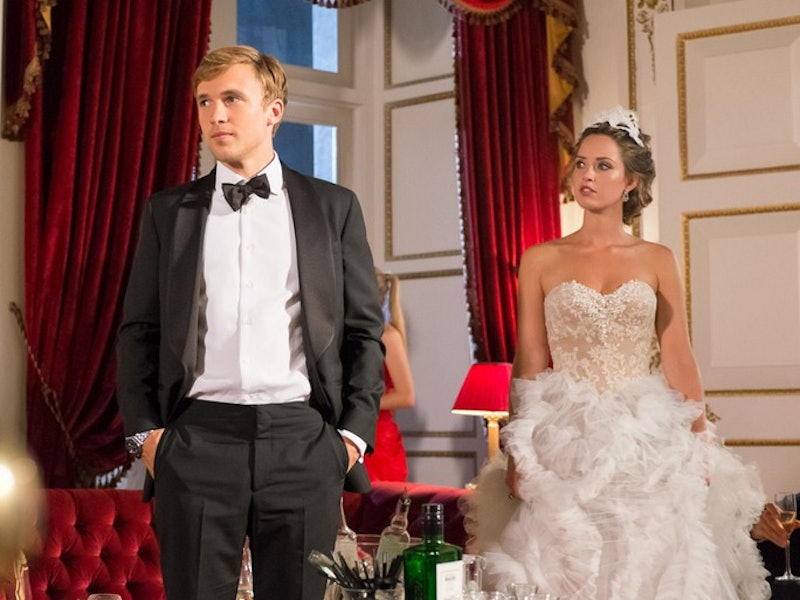 I have to admit that things are not looking great for Liam and Ophelia's romantic future. Not only is Ophelia currently dating Nick (again), but now it seems as though Liam is getting a new love interest on The Royals in the form of Wilhelmina, a female polo player played by Genevieve Gaunt, who seems to be taking quite a liking to our handsome prince (who could blame her?), and the feeling seems to be quite mutual. Though they haven't spent too much time together yet, last Sunday's episode gave them some serious face time with one another and the chemistry was undeniable. She may not have won over Liam's heart quite yet (his love for Ophelia can't just disappear), but I'd say there's definite potential there.

However, this is The Royals that we're talking about, so I'm hesitant to trust that she's really as nice as she seems. These characters (especially the new ones) all tend to have ulterior motives. I mean, just look at Eleanor's girlfriend Mandy/Samantha. The less we know about someone, the more suspicious we should all be. So as much as I want to think that Liam is on his way to having a healthy relationship, I'm fearful that her motives aren't completely genuine.

But that's a worry for another day! In the meantime, let's focus on the actress playing Willow, who I was surprised to learn has ties to the Harry Potter franchise. It turns out that Gaunt played the role of Pansy Parkinson (one of Draco Malfoy's closest confidants in Slytherin) in the third installment Harry Potter and the Prisoner of Azkaban. (She was later replaced by Scarlett Byrne for the remainder of the films.)

I know this little factoid may not seem all that interesting to some, but as an avid Potterhead, I love seeing what our former Hogwarts residences are up to these days. So when I saw the listing on her IMDB page and made the connection, I was beyond excited. (What? I appreciate the small things in life. Also, do you think Liam would care that she was placed in Slytherin? Just saying!) Let's just hope that this character proves to be a lot more likable (and a lot less ill intentioned) to our heroes on The Royals. Poor Liam has been through enough already. He doesn't need a toxic girlfriend thrown into the mix.

So that just leaves you with one question to ask yourself: Are you Team Willow or Team Ophelia?