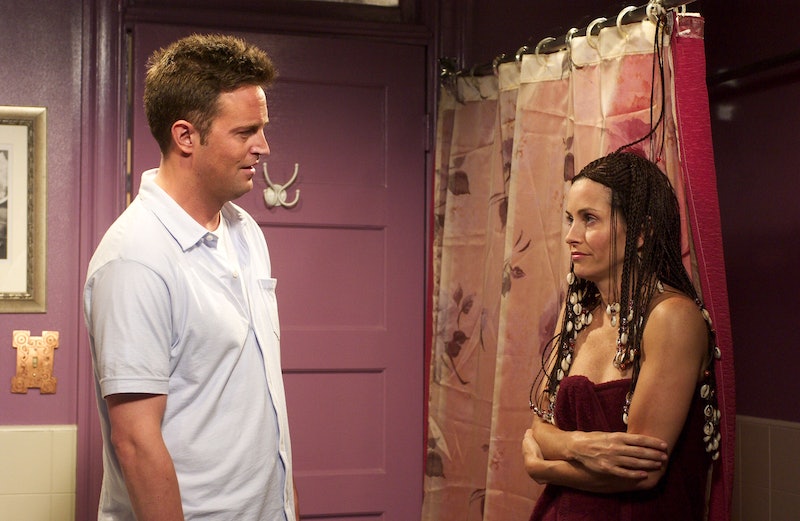 Friends fans, brace yourselves. There may be a rumor going around that Courteney Cox and Matthew Perry are dating, which would make Mondler a real life thing— can you even deal? The timing would definitely be right, as the two are apparently currently single: Cox severed the Arquette from Cox-Arquette many years back and recently ended her engagement to Johnny McDaid, while Perry’s last long term relationship (with Lizzy Caplan) ended back in 2012. That all aside, nobody could deny the chemistry between the pair when you look back on Chandler and Monica’s history.

Which is essentially what I did! I took a hard cold look at Monica and Chandler’s past, and found that they always got on just wonderfully... even before they got together. Sure, it wasn’t all hearts and flowers from the beginning, and we can’t forget that Monica literally laughed off the idea of Chandler as a boyfriend, but through it all, they made sense as an endgame couple. Sometimes you just need to take a step back from the whole destructive Ross-and-Rachel whirlwind to really see that.

Anyway, to support even the idea of a Cox and Perry union (shipping it hard, guys) here is 11 things the fortify Mondler’s chemistry.

1. When Chandler Lost His Mind Over The "New" Monica

Suffice to say when Chandler and Monica both meet in the '80s, it is not love at first sight, at least on Chandler's end. A toe-severing was involved.

2. When They Almost Hooked Up... But Chandler's Mouth Nixed The Whole Thing

A few years pre-show Chandler comforted Monica over her Phoebe-moving-out situation and her distinct lack of boyfriend. I believe he declares Monica "one of my favorite people and the most beautiful woman I’ve ever known in real life." Come on, guys. They have a prolonged embrace, but it ends when Chandler asks if Monica's shirt is "real cotton."

3. When They Made A Solemn Pact

So in "The One With The Birth," Monica is lamenting her singleness again with Chandler, and he broaches the idea of being each other's back up plans (how romantic). That is, if the two of them are still single by the time they hit 40, they'll get married. Luckily they never had to fall on that pact... as they got married a little bit younger than that.

4. When Monica Threw Herself Into This Kiss

This is basically just becoming a running joke at this point, but Monica's talking about how Ross' second wedding is bumming her out and why is she single, blah blah blah. As per usual, Chandler is the one to console her (and Joey's not available) so Monica responds with gratitude and highly charged meaningless sex.

5. When They Had All The Not-So-Meaningless Sex

Whoops! What happened in London was supposed to stay in London, but it just wasn't the case. Apparently the were getting it on that good to continue their secret tryst in the states.

6. When They Frantically Freaked On Joey After He Found Out

Chandler literally tackled him, and once Joey gives his reluctant blessing they have the cutest celebratory kiss.

7. When They Decided That The Dice Was Definitely A Four

And then they almost got impromptu married in Vegas by bringing along an ancient condom as their "something old." For better or for worse, they decided to wait on that. Anyway, Ross and Rachel beat them to the punch.

8. When They Even Got Together In An Alternate Universe

9. When Everyone Is Blubbering With Feels During The Proposal

Well, I mean, not this one.

10. All The Sweet Little Gestures

11. And Their Tag Team Ability To Pretend Fake-It-Until-They-Make-It With Their Babies' Birth Mother

Incidentally Monica would've made a great reverend if she wasn't Jewish.

And that's just skimming the surface. Overall, though it might be celebrity fanfiction that Cox and Perry are legit dating, they've definitely made a case for it in the show.