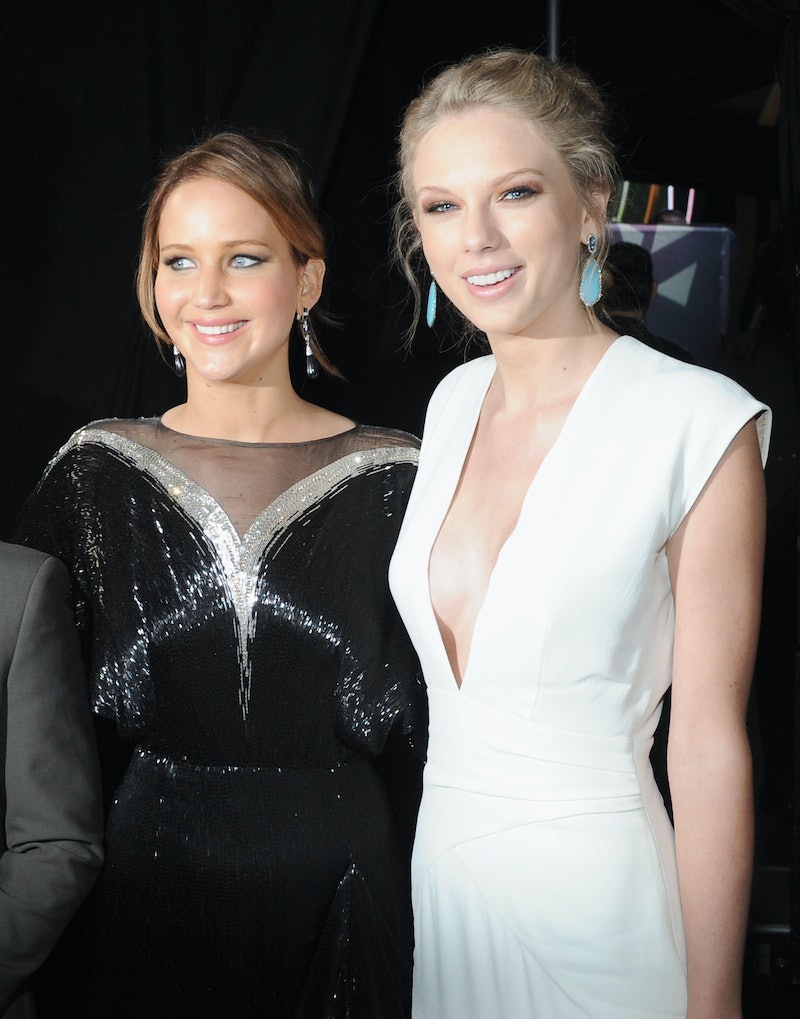 According to a recent article from the New York Post, Jennifer Lawrence is falling out of favor with at least one person other than the ego-bruised Joan Rivers— bereft Post reporter, Kirsten Fleming. Fleming begs Lawrence to "give up doe-eyed ingenue act." She goes on to site Lawrence's acceptance speech for her second Golden Globe as one of feigned surprise and annoyingly "cutesy" breathlessness. Fleming yearns for the "old" Lawrence back, the one who spoke openly and frankly about bodily functions and said things that maybe weren't kosher to.

Perhaps Lawrence is as tired as we are. The girl was thrust from basic obscurity into the gleaming and unforgiving spotlight. She handled it as any normal, un-entitled person would— she kind of had no idea what she was doing and didn't exactly understand the hype surrounding her. So yes, we watched her say silly things on late night talk shows about her uneven boobs, we caught her falling up the stairs at the Academy Awards, and we heard her confession that she may be a little tipsy due to the shots she took with her brothers before an interview. She was trying to navigate a world that was completely foreign to her without losing herself, which includes her wit, her spontaneity and her outspokenness.

Just like any shiny new toy, Lawrence's once all-encompassing allure is beginning to fade. Now, because we know her personality and her penchant for messing up adorably, we're starting to roll our eyes, quick to blame something she did, when in reality I haven't seen a change in Lawrence whatsoever. She still graces the red carpet spattering on about "vagina arms" and spills her Altoids all over herself at a press conference-- she's just a bit more demure than she used to be about it, because she's used to it. And now, we're used to her. She's becoming more comfortable with her fishbowl life, just like anyone eventually adjusts to a new job or a new city. She simply cannot be "new" forever and we shouldn't punish her for that.

So yes, she claimed that she was "scared" accepting her award even though she has won many before that one. So what? Is she not allowed to be humbled by her success? Is she supposed to walk around with a big head and accept her award with a simple "Duh," as the rest of Hollywood does? Are we really getting annoyed with her humility?

What bothers me most is that this criticism is coming from other women. Lawrence, like those Hollywood Sweethearts before her, are the subject of certain envy from both sexes. People want to know what makes them so special? Why do they get to have all the recognition? And in turn, we look for reasons to make them imperfect to make ourselves feel better. Shouldn't this be a time when women step in to support stars like Lawrence? To call out the throw away culture that is perpetuated in Hollywood, the mindset that once a woman ages or becomes familiar we need to find a perkier, zanier, prettier new one. Whereas male stars such as George Clooney are lauded for only getting more handsome, more desirable, and more distinct with age.

Lawrence isn't the first star to experience this May-December public romance. In just the last five years, we have been a witness (and perhaps perpetrator of) putting starlets like Taylor Swift and Lawrence on a shaky and temperamental pedestal only to hack it down when they weren't looking. Surely you remember a young, sweet Swift who was rudely and hurtfully interrupted by a belligerent Kanye West during the 2009 VMA's. Outrage was the only answer to that situation. News outlets and celebrities alike took to television or Twitter or whatever social platform they could to express their disdain for West's injustice against the naive and modest Country singer. Now, we're all aware of the buzz over Swift's "surprised face" at award shows when she goes up to accept her umpteenth accolade. Again, we become frustrated with what we once found endearing, Swift's inability to become pretentious and egoistical. Maybe I'm crazy, but I'd rather see Swift act surprised on stage rather than see her drunk, or naked, or aloof, thinking that someone owed it to her. So conceivably, she may not be surprised to actually win an award anymore, but she can still be unbelieving of her continued success and I see that as refreshing.

In terms of falling out of love with stars like Lawrence and Swift, familiarity certainly does breed contempt. We churn out millions of articles, reports, interviews, and gifs of these girls at an extremely vulnerable point in their lives and we make it impossible for them to live up to these imaginarily-perfect people. Finally, when we've squeezed every ounce of likability out of these young women and come to the realization that they can't possibly be the fictional characters we have so carefully created, we blame them for being irritating and redundant. Unjustly, we wait for them, like vultures, to fall hard so we can pick them apart and show them that they too are fallible.

More like this
Everything To Know About Taylor Swift’s 10th Studio Album, 'Midnights'
By Grace Wehniainen and Jake Viswanath
There's A Taylor Swift Easter Egg In Ryan Reynolds' 'Deadpool 3' Teaser
By Marina Watts
Who Is Nick Cannon Dating & How Many Kids Does He Have?
By Jordyn Tilchen and Radhika Menon
Hailey Bieber Just Responded To *That* Viral Met Gala Moment
By Radhika Menon and Sam Ramsden
Get Even More From Bustle — Sign Up For The Newsletter