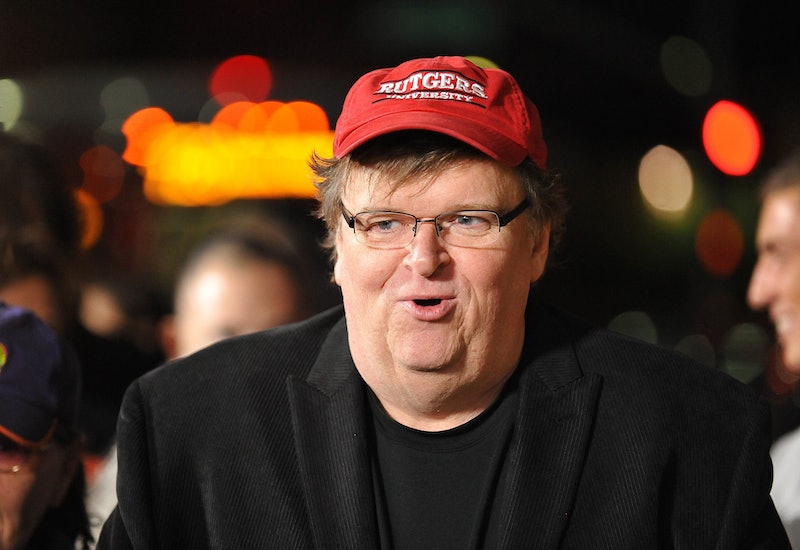 Famous for holding the rich and powerful to task for school shootings, 9/11, and the demise of the Midwest's industrial base, Michael Moore has set his sights on one "angry white guy." This time it's not just a king of capitalism or a hyperbolic, contradictory politician — this guy's both. Moore spoke out Wednesday against Donald Trump, whose proposed anti-Muslim ban has divided Americans and his fellow candidates aiming for the White House.

Moore protested outside Trump's building in New York Wednesday, holding a sign reading "We Are All Muslim." Then he went to Facebook, where he posted an open-letter to Trump, asking him to cut out the hateful rhetoric and move aside so voters can elect a "real president." "You need to go the time-out room in any one of your Towers, sit there, and think about what you've said," the Oscar-award winning filmmaker posted.

Wednesday's protest was not the first time Moore has encountered Trump — or tried to, the police came before Trump showed up. In his letter, Moore wrote of meeting Trump back in November 1998, when they were both on the same talk show. Moore said he remembers that the producers came and told him that Trump was nervous about appearing on the same show with controversial Moore. "'Does he think I'm going to tackle him and put him in a choke hold?'" Moore remembered asking the producer.

Moore then went up to Trump and explained he didn't know much about him, so there was really nothing to worry about it. Moore remembers Trump responding that he was worried about Moore might "pick on" him "for something ridiculous." The show went on without a hitch, but Moore says he remembers thinking, "I was struck by how you, a self-described tough guy from Queens, seemed like such a fraidey-cat."

Moore compared Trump's fear of himself to the fear he's now projecting about Muslims. "Like many other angry white guys, you are frightened by a bogeyman who is out to get you," Moore said, the bogeyman being as "all Muslims."

Then he gets into what's really making Trump's head spin:

Fortunately, Donald, you and your supporters no longer look like what America actually is today. We are not a country of angry white guys. Here's a statistic that is going to make your hair spin: Eighty-one percent of the electorate who will pick the president next year are either female, people of color, or young people between the ages of 18 and 35. In other words, not you. And not the people who want you leading their country.

He goes on to say that Trump will have to ban everyone, because the American people will stand in solidarity as part of the same "human family" against Trump's hateful rhetoric. "We are all Muslim," Moore explained. "Just as we are all Mexican, we are all Catholic and Jewish and white and black and every shade in between."

Moore then calls on his Facebook followers to sign a statement on his website declaring, "We Are All Muslim," and calling on the Donald to put himself in time out if he can't play by the American rules of inclusivity.

If you agree with Moore that we need a president who is both "both compassionate and strong" consider signing.