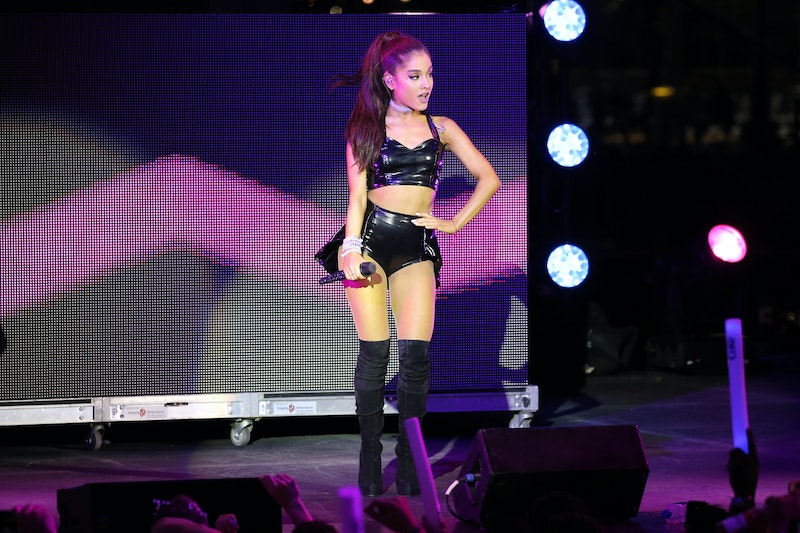 Ariana Grande has an early Christmas present for her fans, and I can't handle it. Ariana Grande's new Christmas album, Christmas & Chill, was released on Thursday and, in the true spirit of the holiday, you can stream it for free, like, right now. Grande has been teasing the album on her Snapchat and Twitter over the past week, and it was well worth the wait. The holiday EP features six original Christmas songs, but they're a far cry from your traditional carols. The tracks have names like "Wit It This Christmas," "Winter Things," and "True Love," and tend to be a little bit raunchy. Which, honestly, only serves to make the holidays that much warmer, in more ways than one.

Sample lyrics are "And whatever is on your list, I’ll do it/Boy whatever it is, you know I’ll do it" and "I'm just trying to keep my baby warm through the winter time." This is not your grandma's holiday mix. Like we've come to expect from Grande's signature sultry sound, the EP is a nice (and naughty) spin on a Christmas album, because, really, the world didn't need another cover of "Baby It's Cold Outside."

Christmas EPs are becoming something of a tradition for Grande. The pop star has put out two other Christmas mini-albums, Christmas Kisses in 2013 and Santa Tell Me in 2014. This EP stands out though, as all the tracks are original.

The EP will be a good consolation to fans as Grande's third album, Moonlight, won't be released until next year. The singer has released one single from the album, "Focus," so far, but Christmas & Chill gives fans some quality tunes to play on repeat until more tracks from Moonlight are dropped. The new EP is a reminder that Christmas music can be fun, and it's further proof that Grande is not afraid to take some risks and shake things up. And, if you still need more evidence, just listen to "Wit It This Christmas," wherein Grande poses the question "Are you down for some of these milk and cookies?"

It's a bold move to make a holiday-themed hookup jam, but Grande did it and dang if it isn't catchy. Christmas & Chill is streaming now.

More like this
22 Movies On Netflix That Are Perfect For The Whole Family
By Bustle Editors
What Is Ben Affleck's Net Worth? At 50, The Oscar Winner Makes 8 Figures Per Film
By Meg Walters
What Is Megan Thee Stallion’s Net Worth? The Traumazine Hitmaker Isn’t Worried About A Budget
By Hugh McIntyre
Megan The Stallion’s “Anxiety” Song Shouts Out Britney Spears & Whitney Houston
By Grace Wehniainen
Get Even More From Bustle — Sign Up For The Newsletter