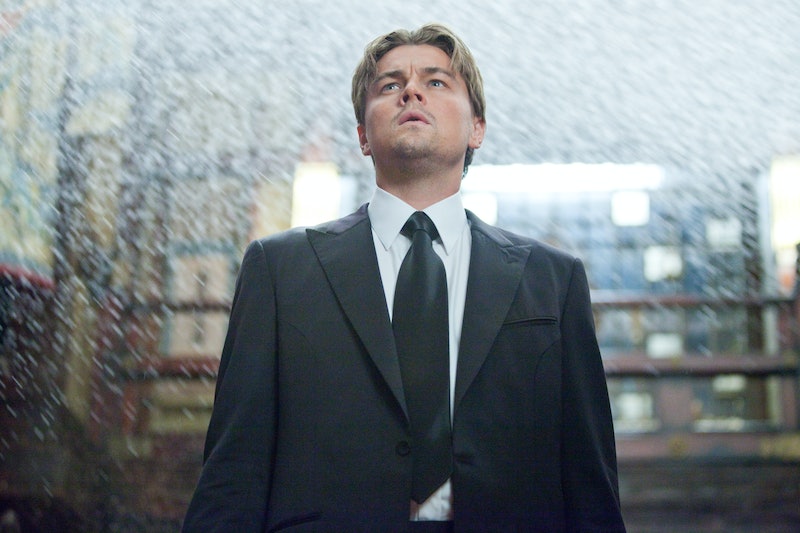 Though Leonardo DiCaprio is one of our generation's most recognizable Hollywood faces, he's consistently choosing and starring in films that subvert our expectations of his capabilities. One thing Leonardo DiCaprio hasn't done, though? Star in any sequels. (Side note: no one is counting his 1991 stint in the straight to VHS classic, Critters 3.) It's not that DiCaprio has become particularly opposed to doing sequels since that '91 flick — apparently, it "just hasn't happened" yet. As the leading man of Alejandro G. Iñárritu's upcoming The Revenant told Variety: “To me, every movie that I’ve done has been its own piece of individual art. That’s not to say I wouldn’t do something that has sequels." So... is he saying there's a chance? DiCaprio continued: "You read a script, it’s got a beginning and an end. It’s hard to envision that being resurrected again. It just hasn’t happened.”

So, is he still saying there's a chance? Because I can't imagine a scenario where I would be upset with a Leonardo DiCaprio installment franchise. (Marvel, you listening?)

In the spirit of that, I thought I'd take a look back at some of DiCaprio's best films, and make the case that each and every one of these deserves a sequel. (Like yesterday, or now. Sometime soon.) And because DiCaprio's characters have been known to — spoiler/tear jerker alert! — die, prequels are also a part of this list. Thank you for understanding.

Before DiCaprio was the household heartthrob you grew to know, love, and hang posters of on your wall, he was just an exceptionally talented 19-year-old actor. DiCaprio played Arnie, the younger, disabled brother to Johnny Depp's Gilbert. DiCaprio's interpretation of Arnie was so painstakingly nuanced and humane, it still blows my mind he didn't receive the Oscar that year. (Like, BLOWS my mind. I can't think about it for too long.) Would love to see what Gilbert and Arnie are up to now — and since Depp is another example of an A-lister that's constantly chosen challenging and interesting roles, a reprisal of these two on screen together would mean the world to me.

Based on the 1978 memoir of the same name, The Basketball Diaries essentially follows what happens when prep school boys get addicted to hard drugs. A reboot that checks up on Jim Carroll 20 years later would be welcomed.

Yes, Rose did indeed let go of Jack, but I think I speak for the masses when I confess that I did not. I'm still holding on to the idea of a prequel starring Jack, pre-Rose. Which would be weird considering that DiCaprio is 20 years older... so maybe he could play young Jack's father? I would also be into a Benjamin Button-type situation. Am more than willing to talk this over with James Cameron. I'm sure has ideas.

Frank Abagnale was basically the precursor to Jordan Belfort, but I'd like to argue even better: Mostly because DiCaprio as Frank Abagnale — the charming tennage con artist — is DiCaprio at his lightest and most self-aware. DiCaprio-Lite, if you will. A revival would be something akin to the family friendly version of The Wolf of Wall Street, but if Spielberg helmed the project, just as fun.

I only have a few things to say about this really. OK, two: Jack and Rose. A movie with Jack and Rose — er, I mean DiCaprio and Kate Winslet never gets old.

Leonardo DiCaprio as Dom Cobb made most (if not all) of my Christopher Nolan dreams come true. And the fact that the ending was so divisive, practically begs for a sequel. Right? Isn't that how this works?

Without revealing too much here (there's a massive, satisfying Hitchockian twist in the third act), I will tell you that DiCaprio gives one of his most intense and emotionally indelible performances in this film. I deem a revisit to this kind of Leo necessary.

Spoiler alert: DiCaprio's character, the villainous plantation owner Calvin Candie, doesn't make it to the end of the film. But Tarantino pulled something compelling out of DiCaprio's Candie that hadn't really been explored up until that point — and hasn't really since. I'd pay big bucks to see it happen again, so, Tarantino, I suggest a prequel. (Please.)

DiCaprio, as the rogue and pretty much amoral character, Jordan Belfort, was nothing if not downright, straight up, fun to watch. The film — and DiCaprio — never takes itself too seriously. It's the kind of movie that only seasoned vets (DiCaprio and Scorsese) could make together, so it's the kind of movie that I of course, am pining to be made into a seven part installment.

Here's to hoping Leo and his team are reading this. I'll be waiting.