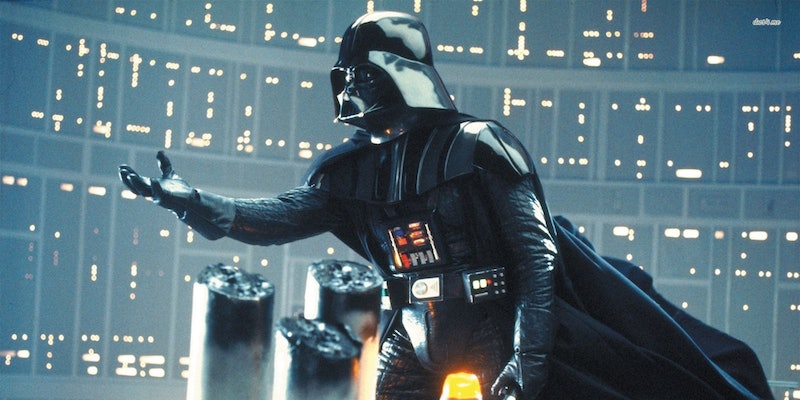 Chronologically, the last time audiences saw Darth Vader was in Return of the Jedi right after he was severely injured while killing the Emperor to save his son, Luke. As we all know, he then died, though he managed to make amends with his son on his death bed. Later, Luke cremated him before partying with Ewoks and his buddies to celebrate the fall of the Empire, during which fans saw Vader again but in Jedi ghost-form, as Anakin Skywalker, not Darth. He stood alongside Obi-Wan and Yoda, and was played by the late great Sebastian Shaw in the original films and Hayden Christensen in the later ones. The Force Awakens takes place 30 years after all of thi,s so you would think that Darth Vader is long gone from the Star Wars universe. Still, people are asking if Darth Vader is in The Force Awakens , and I have the (spoiler-filled) answer.

Although he doesn't physically make an appearance in the movie, his presence is felt — Most significantly by his iconic helmet making an appearance that everyone saw in the first trailer. The severely mangled helmet shows up because the new franchise's main baddie, Kylo Ren practically worships it. That said, Kylo has some issues. First off, he isn't exactly on the best terms with his parents, Han Solo and Leia, and hasn't seen them in years ever since he turned to the Dark Side. When he was younger, Leia had sent him, then known as Ben, to Luke so that he would learn the ways of the Force. Something bad happened, however, and Ben was seduced by the Dark Side, becoming Kylo Ren. This sent Luke into a shame spiral, even though it wasn't his fault, and he went in exile to an island a la Yoda in The Empire Strikes Back. The Force Awakens doesn't say what exactly happened between Kylo and Luke, but I'm sure they'll cover that in Episode VIII or IX. Perhaps there will be an epic showdown between the two. I can't wait.

If you've been charting the Skywalker-Solo family tree, this makes Darth Vader/Anakin Skywalker Kylo's granddaddy. In the movie, he is seen talking to the helmet, basically saying, "I will finish what you started." This is what I mean when I say that although Darth Vader doesn't appear, he definitely has a presence. It's not as a ghost (and I really hope the subsequent movies don't have talking apparitions. Only Obi-Wan can pull that off), but as evil vibes pulsating throughout the veins of the movie. Kylo is the remnants of the darkness that Vader left behind before he found the "light side" and healed his relationship with his son.

It's just too bad that he died right after. If he survived, he could have guided Kylo in the right direction. Then the Resistance wouldn't have to deal with his evil and the First Order wouldn't have to put up with his lightsaber tantrums (he has a couple of them during the movie, and I'm sure we'll see more later on). Yet jokes aside, Kylo Ren clearly gets his evil and his thirst for power from Darth Vader, who is one of the most evil villains in cinematic history. He was ranked number three out of 50 on AFI's list of 100 Greatest Heroes and Villains, right behind Norman Bates and Hannibal Lecter. If the only two guys to beat him out for number one villain of all time are a serial killer with mommy issues and a manipulative, cannibalistic doctor, then that makes him pretty darn evil, I'd say.

Based on his behavior and evil deeds in The Force Awakens It is clear that Kylo Ren is filling Vader's helmet, and then some. Thanks to lessons from Darth, Kylo is well on his way of making that "Greatest Villains" list one day.