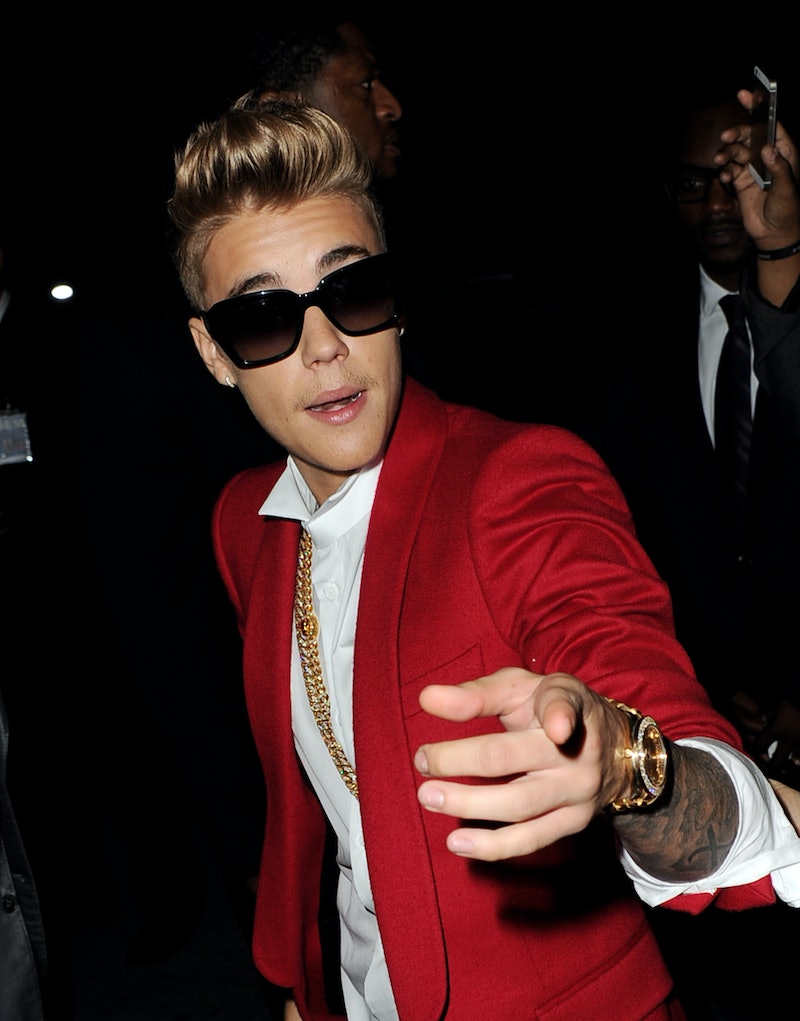 I have some choice words for Justin Bieber, and they are words I never thought I would say. We were concerned enough with the whole egg-throwing, drug possessing drama with Lil Za (I hate myself a little bit more every time I type that name), but now, there's a whole new worry on the table, and its name is sizzerp. Indeed, Justin Bieber is rumored to be a consistent user of Actavis, the millionaire's cough syrup. After all, drinking liters (LITERS) of Robitussin is for proles, ya feel me? Which brings me to my worrying next point, that Bieber has slipped to new lows, and this from a boy who made headlines for peeing in a bucket while slagging off Bill Clinton. The kid is not known for his classy behavior or incredibly mature friends. But now, if he's drinking 800 dollar a pint sizzerp and driving a leopard print car and egging houses and actually consorting with people who feel comfortable giving themselves laughable names like Lil Za, well it's time for Bieber to get a bit of a talking to. After all, there's only so much Bieber can do before the insane battle cries of his hormonal fanbase are drowned out by the sirens of, oh you know, the ton of policemen that raided his house looking for illegal drugs and illicit eggs.

I never thought I'd actually say this, but you need to take a hard look at Lil Wayne's mistakes. He made sizzerp famous, but then he got stomach ulcers, and remember how he had to be hospitalized? You're nineteen-years-old bro, keep guzzling that fancy ass sizzerp and you'll be on a steady diet of mushed carrots and peas by the time you're twenty-seven, forced to wear an adult diaper because your entire body has just given up. That shit's not sexy. While I'm at it I'm going to go ahead and say that the leopard print vehicle is also not particularly sexy, but hey, I'm not in your age demographic anyhow at the ripe old age of twenty one, so what do I know anyway.

My point is that if Lil Wayne is the example from which you can learn things, something has gone terribly, terribly awry. The dude has face tattoos, and we all know that face tattoos are risky at best, and completely tragic at worst/in general. You're losing your shit, and there's only so much screaming and righteous indignation your army of twelve year olds can invoke before no one really listens because you are a teenage basket case. Let me repeat myself, because I am sage and elderly: drinking cough medicine is very, very bad for you. Even the expensive stuff. If you have to procure something outside of the country you reside in, it's probably a surefire thing that whatever that is will not prolong your life, your looks, or your beloved six pack.

Maybe you care more about partying than living until you're ninety, but we all know you care a lot about your bod, and here's a pro tip: cough syrup is not conducive to having a preternaturally ripped body. It's just not. So cut it out man, and stick to more normal drugs, like weed and alcohol and things that you can probably procure within U.S borders. Sure, they're not fabulous for you either, but the sizzerp is legitimately awful, and it makes you trip your balls off, which is probably super bad for your brain on a regular basis. Trust me, I accidentally took too much Delsym once so that I wouldn't cough during a lecture, and I saw some crazy shit. Psychoactive drugs are not for kids Bieber, so calm the hell down with the sizzerp and the eggs and pretty much everything, including your stupid predilection for drop-crotch pants. Seriously.

Love, or really just like, or more so tolerantly yours, Dale