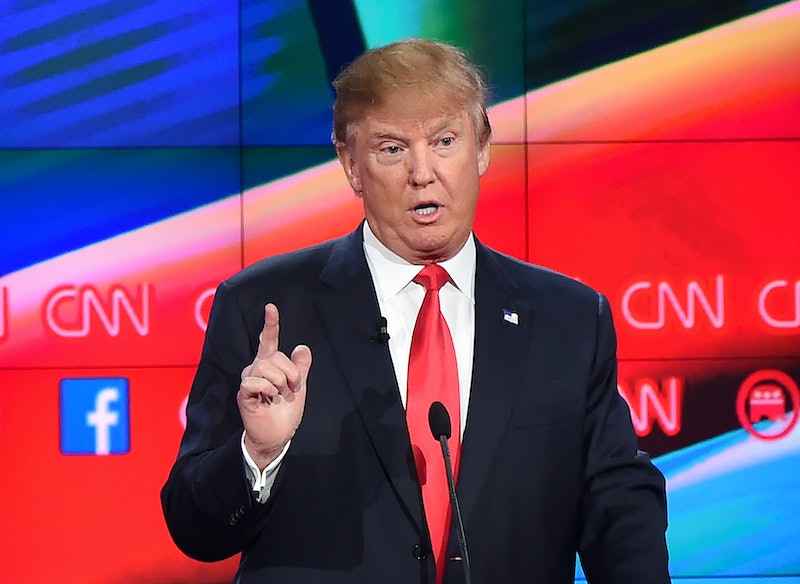 All TV fans are not necessarily Donald Trump fans. And even though the Donald's poll numbers are still high among Republican polls, that doesn't mean that every single beauty pageant fan wants their Nielson ratings putting money into the presidential hopeful's pocket. So, in advance of its Dec. 20 airdate, does the Miss Universe pageant belong to Trump? Well, yes and no. You're right to think that, because Trump was formerly the partial (and then total) owner of the Miss Universe Organization, which means that the Miss Universe, Miss USA, and Miss Teen USA pageants were all making him some sweet, sweet cash as of six months ago.

However, the Miss Universe pageant has changed hands recently. For the past 12 years, Trump had a deal with NBC and Univision (part of NBCUniversal) to air his pageants. But, following some of Trump's comments about Latino immigrants over the summer when his campaign began, NBCUniversal severed all ties with him in July, including booting him from the Celebrity Apprentice franchise and no longer airing the Miss Universe or Miss USA pageants. So NBC is completely out of the Trump game. Their choice is something that Trump disagreed with, releasing a statement to media outlets shortly after the announcement.

If NBC is so weak and so foolish to not understand the serious illegal immigration problem in the United States, coupled with the horrendous and unfair trade deals we are making with Mexico, then their contract violating closure of Miss Universe/Miss USA will be determined in court.

As a network, NBC has certainly made mistakes before, but so far, it doesn't seem to be a problem for it.

But, Trump took the rights to the pageants and sold them in September, after it became clear that NBC was no longer interested. I mean, it makes sense — this is the same Trump who was a seemingly unbeatable businessman no matter how many times he had to declare bankruptcy (four) or whatever other roadblocks get thrown up in his way. So Trump sold the Miss Universe Organization to WME/IMG. (Now the pageant will air on FOX.)

According to BusinessInsider, the Miss Universe Organization is valued at somewhere "between $5 and $25 million," so Trump probably made a pretty penny on the sale — though his fortune is reportedly at least four billion, so maybe he considers that pocket change.

Anyway, after the September 2015 sale, Donald Trump is officially no longer connected to Miss Universe or Miss USA. And it seems like since the move, WME/IMG is looking to move the pageant in a different direction, emphasizing more empowerment among the women and discouraging the shallower implications of what a "beauty pageant" can mean. By advertising with the motto "Confidently Beautiful" and showing the contestants without makeup, it seems like the Miss Universe pageant is turning a new corner — and that seems to include severing ties with Donald Trump's former ownership of the organization.