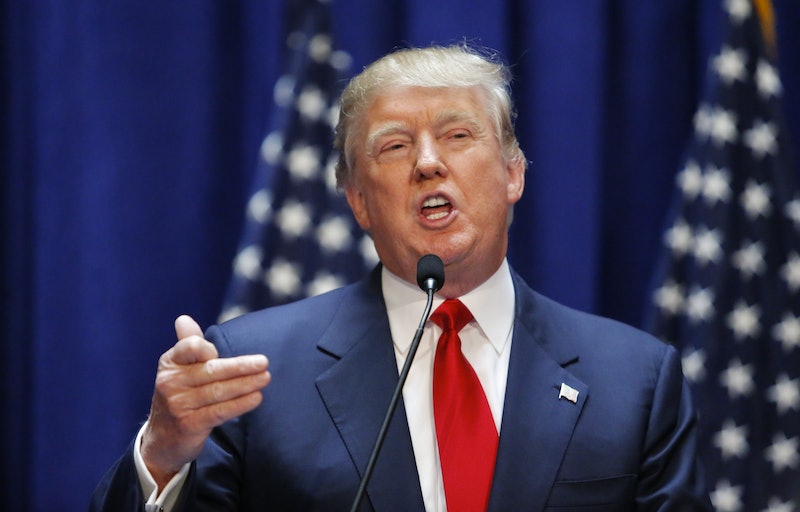 Last week, Donald Trump made a statement during his presidential kickoff speech saying that Mexican immigrants are "bringing drugs, they’re bringing crime, they’re rapists” and it's naturally still causing a lot of drama. Not only was his statement controversial for its use of unfair racial stereotypes, it has also gained a lot of backlash from several media outlets and activists, and as a result, multiple companies including Univision have started to cut their ties with Trump. Adding its name to ever-growing list of ex-business partners is NBC. On Monday NBC released a statement, severing ties with Trump, officially ending the partnership that includes its broadcast of the Miss Universe pageant:

At NBC, respect and dignity for all people are cornerstones of our values. Due to the recent derogatory statements by Donald Trump regarding immigrants, NBCUniversal is ending its business relationship with Mr. Trump. To that end, the annual Miss USA and Miss Universe Pageants, which are part of a joint venture between NBC and Trump, will no longer air on NBC. In addition, as Mr. Trump has already indicated, he will not be participating in The Apprentice on NBC. Celebrity Apprentice is licensed from Mark Burnett's United Artists Media Group and that relationship will continue.

The Miss Universe pageant​ ​seems to be taking the most heat for the scandal.​ ​Not only did Trump's statement​ ​cost the competition two major networks, co-host​ ​Roselyn Sanchez​ ​also dropped her name from the roster. As a Latina woman she took to social media to discuss her reason behind leaving.

​​As a Latina very proud of my roots, culture and everything that we have contributed to this nation, I have decided to cancel my personal [appearance] as co host in the pageant Miss USA… I was very excited and grateful for the opportunity to serve as co a [sic] cheerleader of this great event in which many Latinas have shone, [but what I am] most excited about [is] having loyalty with my people.​

While​ Sanchez' exit certainly makes a statement, Trump assures people it doesn't bother him at all.​

As of today, Donald J. Trump is no longer affiliated with NBC. Mr. Trump stands by his statements on illegal immigration, which are accurate. NBC is weak, and like everybody else is trying to be politically correct--- that is why our country is in serious trouble.

Mr. Trump says, "We must have strong borders and not let illegal immigrants enter the United States. As has been stated continuously in the press, people are pouring across our borders unabated. Public reports routinely state great amounts of crime are being committed by illegal immigrants. This must be stopped and it must be stopped now. Long ago I told NBC that I would not being doing The Apprentice because I am running for President in order to Make our Country Great Again."

Mr. Trump continued, "If NBC is so weak and so foolish to not understand the serious illegal immigration problem in the United States, coupled with the horrendous and unfair trade deals we are making with Mexico, then their contract violating closure of Miss Universe/Miss USA will be determined in court. Furthermore, they will stand behind lying Brian Williams, but won’t stand behind people that tell it like it is, as unpleasant as that may be."