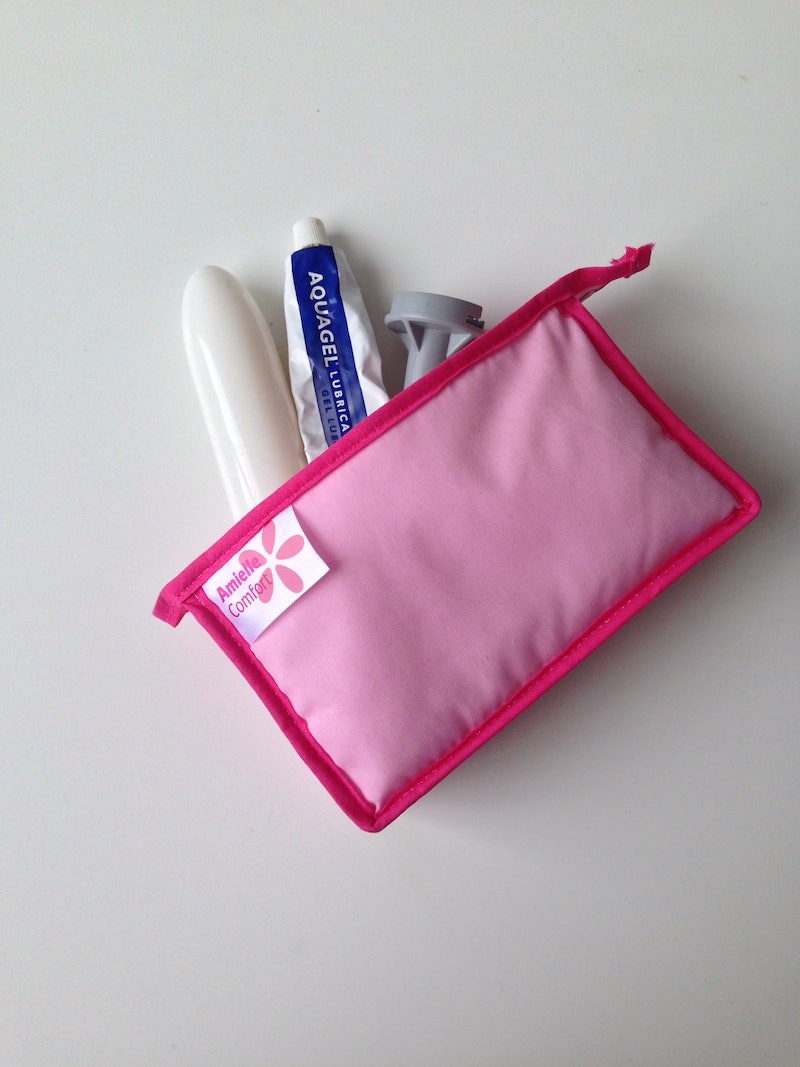 At 11 years old, I cradled a tampon — a symbol to me of my newfound womanhood—and squatted oh-so-elegantly over the toilet. The Care and Keeping Of You: The Body Book for Younger Girls was spread out on the floor and I kept my focus on it, trying to follow its directions on how to insert my very first tampon. But despite my best efforts, I was never able to get the tampon in. I didn't know it at the time, but my struggle with that tampon was caused by vaginismus.

“It’s not for everyone,” I tell my friends who don’t understand how I, at 25, still haven’t successfully inserted a tampon. That book did its best, with cute illustrations, inclusion of all body types, and sweet advice for growing gals — but unfortunately, my vagina (and, as I learned later, lots of other vaginas, too), said “nope” to tampons at a very early age.

According to experts, two out of every 1,000 women will experience vaginismus, an involuntary muscle spasm which makes vaginal penetration difficult and painful. Due to embarrassment, incorrect diagnoses, and lack of statistics and information on the ailment, the number could actually be much higher.

Think of your eyeball and how it reacts when a finger or any other object comes toward it. The eyeball immediately, without your conscious efforts, closes shut. This is similar to how vaginismus operates. Vaginismus means that the pelvic floor muscle tense, and extreme tightness occurs.

And I mean extreme. “It feels like I’m hitting a wall,” my boyfriend told me, when I broke the silence and asked him to tell me what my vagina felt like to him when we attempted to have sex. Because for me, it felt like I was being ripped apart. Think: rug burn. During intercourse, I typically begin to breathe slowly and attempt to relax. But usually, after several attempts at penetration, the unbreakable wall of pubococcygeus muscle wins the debate, and we surrender to other sexual alternatives.

There are two forms of vaginismus: primary and secondary. Primary vaginismus is when a woman has never experienced pain-free penetration and cannot undergo pelvic examinations or wear tampons. Secondary vaginismus occurs suddenly, sometimes after childbirth, a surgical procedure, or in response to sexual assault. And not all women only experience one kind of vaginismus. I had a fantastic and pleasurable sex life for about six months, when I was a senior in college, which somehow makes me a mix of both primary and secondary. I wear maxi pads, I'm otherwise healthy, I'm sort-of sexually experienced, and I suffer from vaginismus.

When you tell your gynecologist that “having sex hurts me”, you might expect to hear immediate concern on their part. However, that has not been my experience. In my life, my diagnosis has been mostly ignored and often overlooked by multiple gynecologists. Painful sex can be a symptom of a plethora of problems — and some of them, like cancer, can be deadly. So you can understand my concern when several doctors — four in total — didn’t take my experience of pain during sex seriously. Since I was 18, I have been talking to doctors about my experience with painful intercourse and I have heard it all:

“You’re just really tight. You’ll loosen up after a while.”

“Were you abused?” (This was said after I repeatedly noted that I hadn't been abused)

The “promise it won’t hurt” procedure turned out to be an electrocauterization of the cervix. Cervical cauterization is used to treat cervicitis, an inflammation of the cervix, and cervical lesions caused by HPV. It appears that I had cervicitis, and when I had cervicitis, sex hurt. Once sex hurt, my body reacted and protected itself (thanks, bod!), and thus ensued my life with vaginismus and muscle contractions. Along the way, I developed other ailments which have caused concern, worry, and lots of Googling.

Oh, and the electrocauterization definitely hurt — the pain led me to pass out. I then drove myself home, and crawled up the stairs to my house in response to the pain.

Throughout my short life, I’ve dated many people. Luckily, foreplay became my forte. I’m in a relationship now; we have been together three years and living together for two. In our sex life, we practice different positions, use breathing techniques, and sometimes, decide that my health is more important than forcibly making my body do something that it isn’t willing to accept.

We have had our ups and downs, successful nights and frustrating ones, but I am definitely noticing a progress as of late. I bought my first set of dilators about five months ago, in order to begin my efforts in recovering from vaginismus. The goal of using dilators is to eliminate the muscle reflex and reduce the symptoms of burning and tightness. Dilator use is supposed to create “muscle memories” and help you gain control over the pelvic floor muscles. Ultimately, these dilators are preparing vaginal muscles for penetration, including penile penetration.

I use the dilators for twenty minutes daily, or two times a day for ten minutes each. They come in a cute little pink pouch, which includes lube and five different sized phallic tools. I went right to work in hopes of stretching, and psychologically tricking my vagina into loving penetration again.

Vaginismus doesn’t go away with a pill. It isn’t cured by taking medicine, or receiving a shot. It’s time-consuming, it can feel all-encompassing, and caring for it involves dedication and persistence. I remember sobbing when I was told that my diagnosis was “in my head,” and not something that could be cured by a single doctor's appointment. I would have given anything for a quick cure, a simple antibiotic, or even another procedure.

Unfortunately, we can’t choose our ailments. These are mine. I wear them proudly, and I will be okay, anyway.