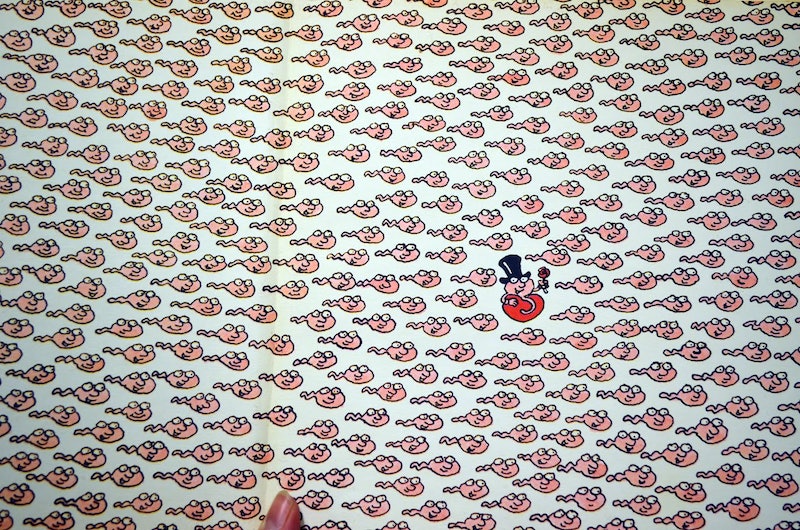 The only thing more awkward than going through puberty is reading the books explaining puberty that well-meaning adults thrust upon us. I don't mean that as a criticism; everything is inherently mortifying when you're a tween, from having your mom drive you to the mall, to hearing anyone say the word the word "trombone" out loud. So why would a book explaining the mysteries of pubic hair and vaginal discharge (with the help of some shockingly accurate drawings) be spared?

But the sex ed books of the '70s, '80s, and '90s seem to occupy a particularly unintentionally hilarious corner of the literary universe. Sex ed books for young people existed before the '70s, of course; but in the '50s and early '60s, they often focused less on explaining the enigmas of puberty, and more on how women should not give in to their sexual urges, because everyone would hate you if you got fingerbanged. The 1971 release of Our Bodies, Ourselves, however, ushered in a new era of frank, nonjudgmental books about human sexuality; one year later, Where Did I Come From?: The Facts of Life Without Any Nonsense and with Illustration , ushered in the era of progressive, nonjudgmental books about human sexuality for younger readers. And we (and our parents who refused to make eye contact as they handed these books over to us) never looked back.

In the decades since then, dozens of books have been published that attempt to speak to kids respectfully on their level about sex. These books both informed us and made us want to run away to a convent forever, where no one would ever try to show us a drawing of the inside of our vagina or explain how sperm entered the fallopian tubes. And so, we remember them fondly, but also with a cringe. You're fighting the good fight, Unintentionally Hilarious Books About Puberty, and your goals are admirable — so I'm sorry that you're so damned funny.

Representative Line: "It gets bigger as you get bigger" (written over a drawing of a baby staring at his penis).

If you want to know where the entire concept of "informative-yet-cringe-inducing" sex ed guides came from, look no further. This picture book explains the ins and outs of conception (literally), birth, and human sexuality by utilizing Hallmark-schmaltzy drawings people making sex faces at each other, or being expelled from a womb.

Fun fact: Peter Mayle went on to write a series of memoirs and novels about living as an expat in France, some of which became international bestsellers, and one of which was made into a movie starring Russell Crowe. Which just goes to show, we never know what the future holds for us, even if we start our professional careers explaining vulvas to children.

Representative Line: "Some [parents] fear that by giving teenagers information about sex, we encourage them to rush out and 'do it.'"

Like the well-meaning, Chico's-wearing guidance counselor who might have given this book to you, this book had the right intentions, but felt a little too much like an adult trying to win you over by telling you how they smoked pot in the '60s.

3. What's Happening To My Body: Book For Girls

Representative Line: "Billions of human beings have made it through puberty. You will, too!"

This forthright guide to boobs, pubes, and the ways semen can ruin your life was available in specialized editions for both boys and girls (and was repackaged in later editions under the title My Body, Myself — presumably to tap into the demographic that wanted nothing less than to find out what was happening to their bodies).

I can only speak to the girls' edition, as I spent a decent chunk of 1992 hidden in the women's bathroom of the Trumbull, Connecticut Public Library, reading this book because I was too scared to actually check it out. The book's shameful-yet-thrilling instructions about how to chart the stages of your pubic hair growth have remained lodged in my brain for the past 20+ years. So I guess it is a success!

Spun off from gURL.com, the super successful girl-oriented '90s web empire (which almost definitely hosted your Alanis Morrissette fan site in 1998), this book didn't reinvent the sex ed wheel, even though it gave it its best shot. Well-designed and very laid-back about premarital sex, this book was like your cool aunt explaining sex to you, which unfortunately, is exactly as embarrassing as your uncool aunt explaining sex to you.

Which was maybe the ultimate statement on how impossible the struggle to make a cool, fun, unembarrassing, relatable book about puberty for tweens is. There may just not be any cool ways to explain pubes to the people who are about to get them, you know?

5. The Care And Keeping Of You (American Girl Library)

Representative Line: "At first, the idea of getting periods may seem, well — gross."

American Girls! They taught you about the lives of little girls in pioneer times, and now they're going to teach you about getting your period! In between slices of blandly practical advice about skin care and proper warm-up techniques for sports, this tome held some very frank advice about inserting a tampon (though intensive Google image-based research has led me to believe that this section may have been excised from more recent editions).

The permanently prepubescent American Girl empire seems like a strange jumping-off point for explaining puberty to girls, but I guess if you were willing to let the American Girls teach you about butter churns and war bonds, their publishers assumed that you were down with them teaching you about anything.

More like this
Remember These Ancient Pieces Of '90s Tech?
By Lucia Peters and Emma Carey
11 Trends From The ‘90s That Made You Feel So Cool
By Julie Sprankles
Here’s How To Deal With Sexual Frustration If You Don’t Want Casual Sex
By Annakeara Stinson and Mackenzie Sylvester
Here’s How To Reignite The Spark In A Sexless Relationship
By Vanessa Marin
Get Even More From Bustle — Sign Up For The Newsletter