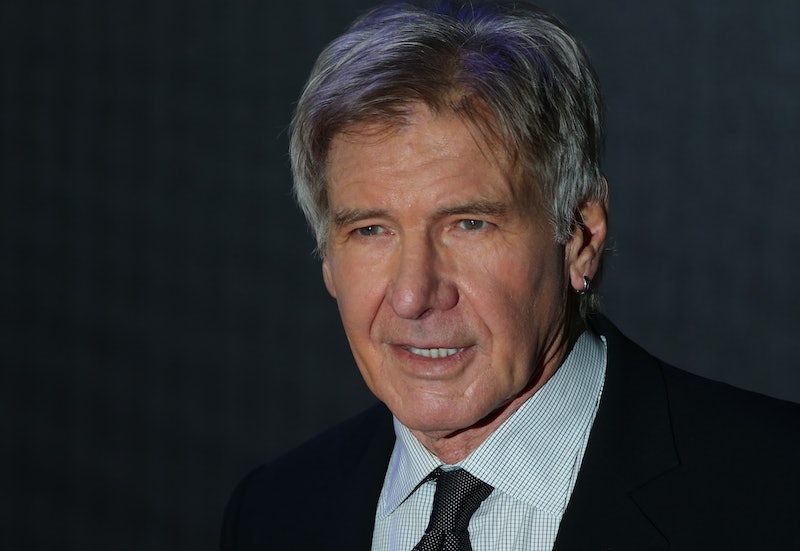 Do you hear that? It's the hum of a million lightsabers roaring to life in theaters worldwide. But even if you weren't one of the lucky few to nab an early ticket to the Star Wars: The Force Awakens premiere, that doesn't mean that the force wasn't still very much apart of your evening. You see, pretty much the entire cast of Star Wars appeared on Conan Thursday night and proved to be chock-full of surprises — like when Harrison Ford destroyed the Star Wars Millennium Falcon. OK, so he didn't destroy the actual Falcon, but he did destroy a Lego version of it that belonged to Conan's producer Jordan Schlansky.

Knowing how much of a fan his colleague is about the film franchise, Conan had Jordan come out and ask Ford and J.J. Abrams a few questions — one of which included having Ford sign his Lego Millennium Falcon that apparently took him 60 hours to put together. (Not to mention that it was worth close to $5,000.) But when it went to hand it over to Han Solo himself, disaster ensued. And I'm not just talking about a small crack in the device. This was a full-on massacre of such a sacred item.

But don't just take my word for it. Check out the totally not planned annihilation for yourself below and please make sure to appreciate Ford's spot-on dry humor. I bow to your sarcasm, sir.