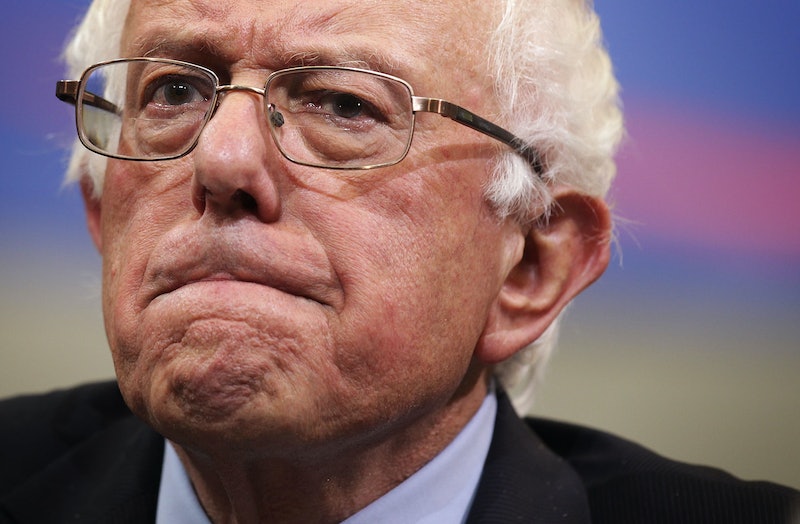 While interviewing Bernie Sanders on her 10 Most Fascinating People special, Barbara Walters said the Vermont Democrat doesn't look like a president, and in fact that he could be "better looking." While he took mock umbrage with the whole good-looking part ("Now you're insulting me, Barbara," he joked), Sanders agreed with the idea that he doesn't look like a president. But is that true? I'd argue that Sanders has a "lovable grandpa" look going on, that this is probably at least part of his appeal as a candidate, and that as far as having a "presidential look" goes, he could do much worse than he is.

For comparison, and with all due respect, let's look — literally — at some of the other people running for president. We have Jeb Bush, the human South Park character; Rand Paul, the man with the ramen noodle hair; Ted Cruz, whose face appears to be melting off; and Donald Trump, who... well, the less said about his looks, the better.

Conversely, plenty of candidates with that "presidential look" eventually learned that being good-looking isn't enough to get you into the Oval Office. There's former vice president Dan Quayle, the "young, conservative and handsome" politician whose 2000 presidential campaign crashed and burned. There's Mitt Romney, who was seemingly designed in a laboratory to look as much like a president as humanly possible; needless to say, that didn't work. And of course, there's John Edwards who, despite looking very polished during his 2008 presidential run, eventually ran into other problems on the campaign trail.

The point is, looking "presidential" doesn't really mean that much. And as far as Sanders goes, plenty of presidents have skated into office with similar looks to his. For example...

Some have said that Sanders looks grumpy, but he's a veritable Pollyanna compared with the 23rd president of the United States, who was likely born with a look of displeasure on his face.

The sixth U.S. president was yet another Grumpy Gus who nevertheless made it to the White House.

One of America's most forgettable leaders, Martin Van Buren actually looks a bit like Bernie Sanders, if you squint a little bit.

Let's not forget Uncle Ike, whose "adorable grandpa" bona fides, much like his military credentials, are beyond question.

Another president who nobody thinks about anymore, Chester Arthur served as commander-in-chief despite having muttonchops wider than his head.

Unkempt hair, a perpetual scowl on his face — when you think about it, Bernie Sanders could be the 21st century reincarnation of Father America himself.

Lastly, there's the Gipper, who was kind of like the grandpa you avoided at family gatherings.

More like this
Yes, Billboard Queen Angelyne Really Ran For Governor Of California
By Brad Witter
10 Times Diana & Meghan Spoke Similarly On The Royal Family
By Sophie McEvoy
How The City Healed Five Years On From The Manchester Arena Attack
By Ella Glover
Michigan’s Governor Is “Going To Fight Like Hell” To Protect Abortion Access
By Andrea Zelinski
Get Even More From Bustle — Sign Up For The Newsletter