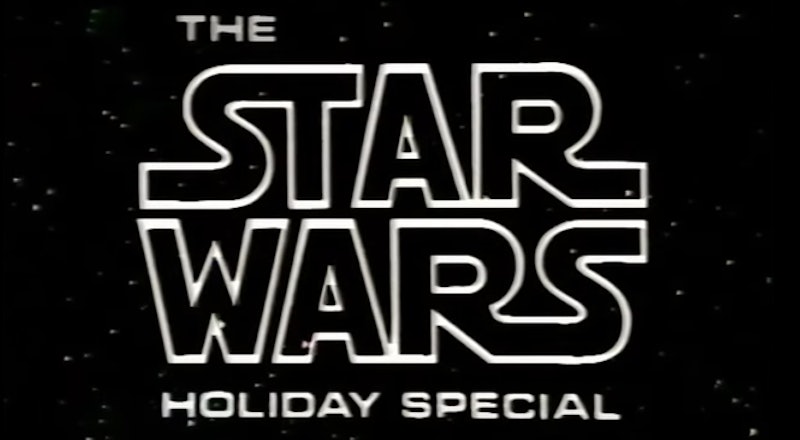 During this, this holiday season of Star Wars fandom, we should probably take a moment to remember that once upon a time, there was an absurdly long Star Wars holiday special on mainstream network television. Even die-hard Star Wars fans may not have actually seen this 1978 "movie," which stretches the mythology in a way I didn't know was possible. Personally, I didn't know this existed until my dad somehow found a DVD copy of this thing and made me, my brother, and my step sister watch it. Christmas got real awkward that year. (Sorry, for putting you on blast, Dad.)

The plot goes something like this: Han is taking Chewy home for Life Day (see: Wookiee Christmas), but unfortunately, the pesky Empire is still pretty pissed at them for like, being rebels and successfully challenging them, or whatever. We spend most of this movie listening to Chewy's family make sad wookiee sounds, with occasional appearances from Star Wars favorites and a few '70s celebrities. Mostly, it's just super weird and doesn't involve nearly enough Han Solo.

But lucky for you, I watched it so you didn't have to, and boiled it down to these 36 "necessary" moments. May the Force be with you. You're gonna need it.

1. The Don't Have Christmas In Star Wars, They Have Life Day

And all I can gather about it is that it's a time when Chewy is supposed to be home with his wife, father, and grunting offspring. George Lucas, I see you.

2. It Has All Kinds Of Guest Stars, Including Bea(trice) Arthur & The Jefferson Starship

Do you think the band was in on the joke, or nah?

3. Apparently, Darth Vader Is Invited Too?

Didn't they learn anything in these movies? Sith Lords aren't great holiday party guests, y'all.

4. Chewy's Relatives Are The Stars Of The Show

Some of them are, uh, interesting looking.

As if having demon eyes wasn't enough.

5. Chewy Has The Most Baller House Ever

The sunken living room of my dreams, plus the moss carpeting that I could honestly take or leave.

To cook whatever it is that wookiees eat in that fabulous space...

7. It Takes Until The 14-Minute Mark To Hear Any Language Other Than Wookiee

8. And Five Of Those Minutes Are Spent Watching Cirque Du Soleil Pop Out Of A Space Chess Board

Me too, little Wookiee. Me too.

8. Luke Wears A Lot Of Makeup For His TV Debut

Gotta look good when you Skype with your friend's best friend's family? I mean, whatever. Get it, Skywalker.

9. Luke Tells Chewy's Wife To Smile And It's Super Creepy

That's her "I'll rip your arms off if you ever tell me to smile again, but it's the holidays so I'll chill this time" face.

And apparently, there are no facial hair rules in Darth Vader's military because that is one EPIC stache.

11. The Code Words For "Han Solo Is Bringing Chewy Home" Are "That Carpet You Ordered Is Coming, Made By Hand... Solo"

And that's not even the most wrong thing about this part of the special.

13. Wookiees Are Terrible In The Kitchen

Girl, I don't know what you're doing, but it is not working.

14. There Is Some Real Action In This Thing

And the Empire only seems to be concerned with finding Chewy, of all people. I'm mostly concerned with seeing more Han Solo in this hour-and-a-half long special.

17. Then Grandpa's Machine Gets A Little Porny

"I'm created in your mind ... Oh yeah, I can feel my creation." THIS WAS ON NETWORK TV?

20. Storm Troopers Are Not As Scary As I Remember

This dude's inner monologue: "Back off big guy."

21. Then The Special Gets Really Dark

The Imperial guards are checking IDs? Threatening to kick little Lumpy? How is this suddenly darker than some parts of the movies?

22. But Jefferson Starship Apparently Stops Storm Troopers In Their Tracks?

OK, only temporarily, but they're just so transfixing. The rings! Oh, the purple rings!

23. Then Comes The Part Where The Cartoon Portion Of The Special Has Been Scrubbed From The Internet

It was the only part that was actually going to make sense!

24. Even The Guest Stars Start To Look Tired By The Halfway Point

OH MY GOD, WHY IS THIS SO LONG.

25. Still, It's All Worth It To See Bea Arthur As The Salty Bartender Of My Space Dreams

After Bea is like, "GTFO," this guy's like, "NP, but I'm just going to wait here and harass you when you're back." Why is this special so sexual and yet, so juvenile?

Ladies, stay away from space cantinas. And guys who drink from a hole in the top of their heads.

28. There Are Words To The Cantina Song And Bea Arthur Knows Them

It was the original "Closing Time." Who knew?

29. The "Rescue Chewy's Family" Plan Goes Off Without A Hitch, Thanks To Han

Who is apparently so awesome he only needs to look at Storm Troopers before they defeat themselves? Ah, who cares. Young Harrison Ford is here.

30. I Mean, I've Been Waiting For An Hour For This

31. Though, For A Special About Chewy's Family, We Sure Have Seen Very Little Chewy

32. But That Doesn't Seem To Bother Anyone Because Check Out These... Wookiee Space Monks?

Is this what Life Day is all about? I AM SO CONFUSED.

I never considered the fact that R2 and 3PO might be dead inside, until now. Thanks for ruining my childhood, guys.

34. Oh Man, Leia Is Talking About The Meaning Of Life Day. This Thing Might Actually Have A Point.

Nope, still just Christmas with Wookiees in red robes, hanging around the Tree of Life (not to be confused with the Terrence Malick movie).

35. But At Least She Managed To Find Lyrics To Sing To The Star Wars Theme

36. Oh Yeah, And It Ends With Chewy Making His "Happy Life Day" Face

Which also resembles my "don't make me watch this again" face.

Or whatever wookiees say before they stare at a table filled with balls of light and absolutely no food.