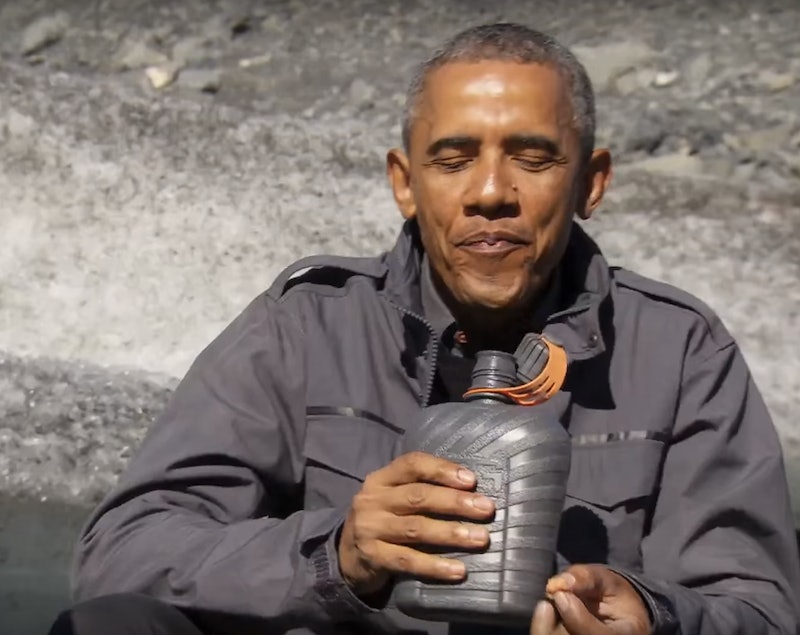 President Obama takes a hard-line stance on many issues: providing affordable health care, funding Planned Parenthood, and keeping U.S. borders open to Syrian refugees. And on Thursday, America found out another thing that Obama stands firm on: not drinking his own urine. The discovery came during POTUS' highly anticipated episode with NBC's Running Wild with Bear Grylls, an unconventional TV appearance designed to draw more attention on the problem of climate change.

The survivalist show is known to literally drop host Grylls in challenging situations with nothing more than the clothes on his back. And yes, Grylls does drink his urine (and others') when he doesn't have water available. In this special presidential episode, however, things are a much tamer. Obama navigates the Alaskan wilderness as Grylls shows him the devastating impact of global warming, such as the receding Exit Glacier which has lost 1.25 miles of its icy stretch since 1815 due to higher temperatures.

But while Obama is open to eating a bear's leftover half-eaten salmon, he's clearly more hesitant at the idea of guzzling urine. Now, no urine is actually offered or shown in the episode. Instead, Obama asks Grylls if it really can keep a person hydrated, and Grylls tells him it can. Obama says he'll remember that in case he's ever in that kind of life-or-death situation, but drinking his urine is not something he ever plans to do. "I suppose, in extremis, it's something that I would do, if the alternative was death," Obama says. "It's not something I'd make a habit of, and I probably wouldn't do it just for a TV show."

While Obama is usually willing to put himself out there unlike any other president before him, such as running wild with Grylls, it seems he will draw a line somewhere. And that line is yellow.

More like this
Yes, Billboard Queen Angelyne Really Ran For Governor Of California
By Brad Witter
Watch Benedict Cumberbatch Lead An ‘SNL’ Medieval History Lesson On Roe v. Wade
By Grace Wehniainen
The 6 Best Air Conditioner Alternatives
By Vanessa Spilios
What To Know About Taking More Than 1 Piriteze Per Day
By Bustle UK
Get Even More From Bustle — Sign Up For The Newsletter