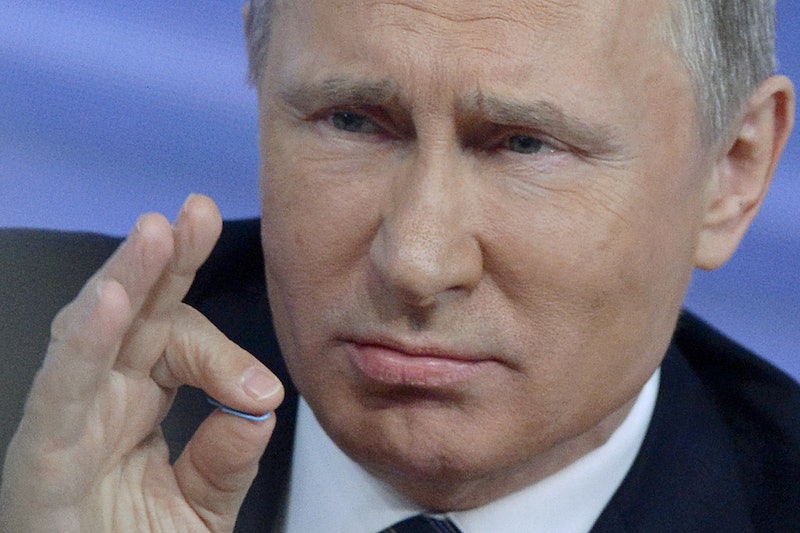 While a lot of Donald Trump's presidential campaign has been rooted in entertainment and shock, things got pretty real on Thursday when Russian President Vladimir Putin basically endorsed Trump for president, calling him the "absolute leader of the presidential race." Considering Putin is not Obama's biggest fan, the kind words from the Russian leader speak volumes. And it appears Trump is more than willing to listen to Putin's showers of praise.

Along with using adjectives like "talented" and "outstanding," Putin described Trump in a news conference as "a very outstanding man, unquestionably talented." In a statement to CNN released by his campaign, Trump welcomed Putin's gesture. "I have always felt that Russia and the United States should be able to work well with each other towards defeating terrorism and restoring world peace, not to mention trade and all of the other benefits derived from mutual respect," the statement read.

Throughout his campaign, Trump has insisted the United States needs not just a more open relationship with Russia, but a friendship. Trump has enjoyed citing the fact that both were featured in the same 60 Minutes episode back in September. Trump touted it as a ratings win for the show and the birth of their genial manners toward each other. But as Time pointed out, their 60 Minutes interviews were actually done separately — across the world.

The United States and Russia have a long history as fierce rivals and reluctant allies, but the two countries have come together as recently as Wednesday to tackle the rise of terrorist groups such as ISIS. According to the Wall Street Journal, the United States and Russia will present a joint plan to the U.N. Security Council to cut off ISIS' funding. It's a rare move considering Obama and Putin have butted heads on the Middle East.

But again, this is a relationship out of necessity. If Trump is elected president, the lines of communication will surely increase between the two countries, but how that will ultimately play out for America is debatable. Both Trump and Putin share similar ideals — pro-business views with a militaristic attitude on foreign policy — and this kind of partnership could dramatically change the world stage.