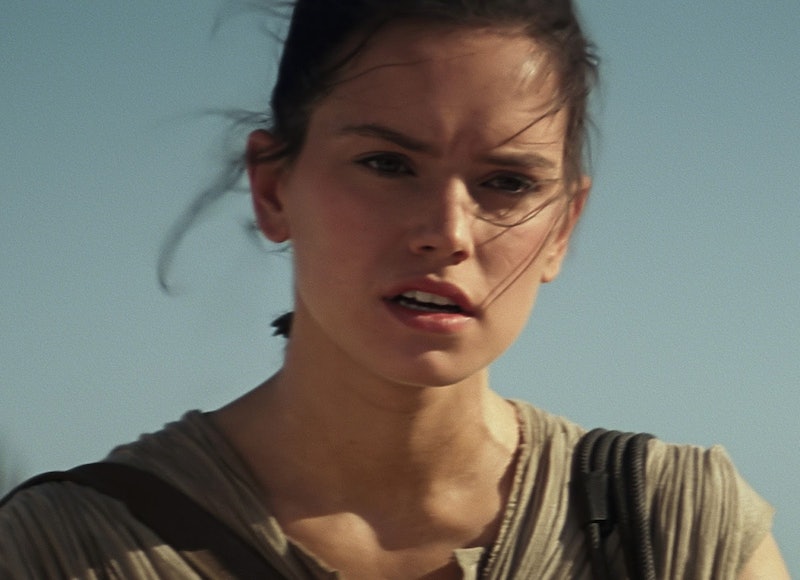 I know, I know. You're in love with Rey. And how could you not be? The heroine of Star Wars: The Force Awakens isn't just a certifiable badass, but she's also the first female main character in the entire Star Wars franchise. Even better, she carries the entire film well on her shoulders, to the point that it's near impossible to believe that this is Daisy Ridley's first major acting job. Of course, with all the Rey love pouring in from critics and fans alike, I don't blame people for wondering if Rey will be in Rogue One, the first film in the Star Wars Anthology that will give us an entire series of standalone movies that take place in a galaxy far, far away. Wanting Rey to be in every Star Wars movie from now on is a pretty common reaction to seeing her navigate The Force Awakens with such unfiltered awesomeness, but Rey fans are going to have to calm down for a second when it comes to Rogue One.

Rogue One: A Star Wars Story is set between Revenge of the Sith and A New Hope aka the final film in the prequel trilogy and the first film in the original trilogy. Meanwhile — SPOILER ALERT — The Force Awakens leans pretty strongly on the fact that Rey is Luke's daughter. It would be kind of hard for Rey to appear in Rogue One, then, since Luke didn't have a daughter in the original trilogy, and thus Rogue One takes place before Rey was even an idea in her parents' minds. The official synopsis of the film concerns "a band of resistance fighters unite for a daring mission to steal the Death Star plans," but that's not to say Ridley was completely not involved. Apparently, she's already visited the set.

"I love Felicity Jones. It was funny because I went to go see the Rogue One set and I was like, 'Oh my god, I love you,'" Ridley said in an interview with Variety, proving that she's basically one of us. "And she’s so tiny, and elegant, and she’s just so small. Everyone’s so much smaller than they seem. Everyone’s like, 'Oh my god. You’re kind of tall.' Who else? Oh, and then obviously people like Celia Imrie, the English greats." She didn't dwell on, or specify, why exactly she was visiting the set — aside from why not visit a Star Wars set if you can? — but I doubt it was because they were slipping a scene with Rey in there. Unless Rey fans want to start holding their breath that there will be a flash-forward post-credits scene to Rey at the end of Rogue One, this is one dream they'll have to give up on.