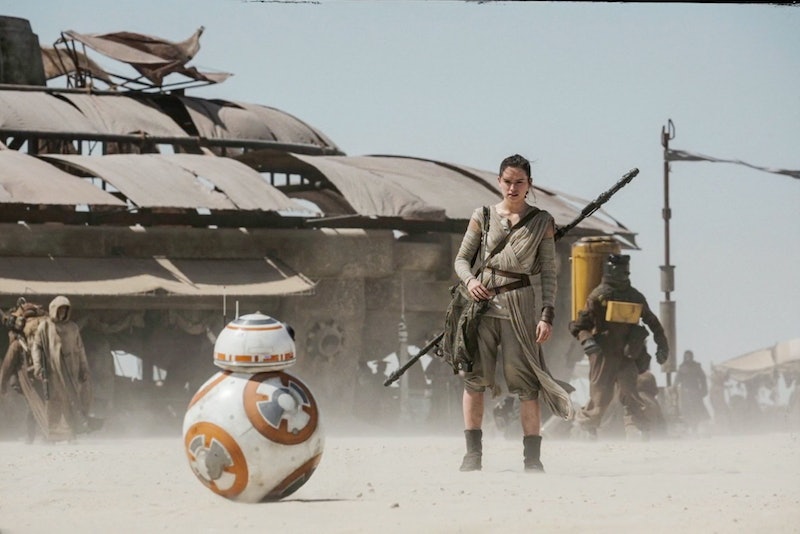 When it was announced that Daisy Ridley would be playing Rey, the main protagonist of Star Wars Episode VII: The Force Awakens, many people, including myself, were overjoyed that the newest hero of the Star Wars universe would be female. But as soon as that feeling hit I also wondered, “Just who the heck is this Rey, anyway, and who are Rey's parents in The Force Awakens ?” At this point, fans would be foolish to think that the main characters of the new movies don’t have some sort of familial relationship to the older ones. In essence, Star Wars is a story about legacy and its familial conflicts are bound to reach Shakespearean proportions. So what do these family connections end up being in Rey's case? Spoilers ahead!

At first it was presumed by fans that Rey and Adam Driver’s Dark Side villain Kylo Ren might be the twin children of Leia Organa and Han Solo. It is, in fact, confirmed in The Force Awakens that Kylo Ren is Leia and Han’s son Ben, but they never mention a daughter or any other children (but that doesn’t necessarily mean there aren’t any). But because of multiple suggestive happenings and images presented in the film, Rey has got to be related to someone in this family. So who could it be? The most probable answer is the final Jedi himself: Luke Skywalker.

Let’s start with Rey’s backstory, if you can even call it that, since the movie provides so little. She was abandoned on a desert planet named Jakku and, judging from the marks she makes on the wall of her home (hilariously, an abandoned Imperial AT AT), she’s been alone, and waiting for the return of her family, for quite some time. Was she told they would one day return for her? It’s never made clear. But it is an interesting stylistic coincidence that Rey inhabits a sandy, desert planet on the outskirts of space frequented by junk collectors and smugglers, just like Luke’s adopted planet of Tatooine. Rey is an orphan on a desolate planet, even dressed in similar gray shades and befriending an adorable droid. The DNA only gets more suggestive as the film goes on.

When Han, Finn, and Rey arrive at Maz Kanata’s (Lupita Nyong’o), Mos Eisley-like watering hole, Rey has a very vivid vision, much like Luke Skywalker’s vision from The Empire Strikes Back. First, she hears the screams of a young girl and images of being away from her family. Then, the familiar shot of what we all assume to be Luke shrouded in a robe, his mechanical right hand touching R2-D2. A mysterious, deep voice says, “Rey,” and I swear as much as I can swear that the voice sounded like Obi-Wan Kenobi himself, Alec Guinness. At the end of this vision, Rey finds a box containing the blue lightsaber that once belonged to Luke Skywalker, and to Anakin Skywalker before him. How did it get there after falling into the depths with Luke’s hand at the end of Empire? We may never know, but the lightsaber calls to her, and reject it she might, but the Force, it seems, is strong with her.

Kylo Ren hears that a girl is the one who is in possession of the important information within BB-8 and he freaks out at the mention of "a girl" with a new and violent intensity. When Rey is captured by Stormtroopers, Kylo Ren mocks her desire for a father figure. Perhaps he knows something audiences do not? She uses the old Jedi mind trick to escape, telling her guard that he will “Remove the restraints and leave the room with the door open.” She’s shocked when it finally works after three tries, but to viewers at that point in the film it is delightfully expected. C-3PO says that R2-D2 has been in a self-inflicted "low power mode" since Luke went missing, but he comes booping back to life when in Rey's general vicinity. Does he detect the genes of his owner? Later, during an intense fight in a snowy forest between Finn, Rey and Kylo Renn, the Dark Side villain attempts to use the Force to recall the lightsaber from the ground, only to watch it fly into Rey’s open hand. In the final shots of the film, with Rey returning the lightsaber to Luke on the isolated, island-filled planet on which he is in hiding, you almost expect her to say the word “father,” but you also don’t really need her to. It’s never said outright that Rey is Luke’s child, but if she’s not, that a serious bait and switch.

So assuming that Rey is, in fact, Luke’s daughter, that introduces a serious but obvious question: Who is Rey’s mother? Luke Skywalker has never had any love interest in the films, but he sure did have one in the Expanded Universe novels. Mara Jade was a smuggler trained by Palpatine who sworn to avenge Palpatine’s death by assassinating Luke. Luke eventually helps her break free of Palpatine’s telepathic hold and they fall in love, marry, and have a son they name Ben. Now, we know that the Expanded Universe has been thrown out, not to be used by this continuation of the Star Wars universe, and that Han and Leia have a son named Ben (Instead of their EU twins Jacen and Jaina), but that doesn’t mean that Mara Jade won’t make an appearance and possibly be Rey’s mother. Even if Rey was immaculately conceived ala Anakin Skywalker, Luke couldn’t carry her himself (unless Star Wars is about to get really different.) But the positive outcome of all this mystery is this: there’s going to have to be another female character introduced in the upcoming Star Wars sequels. And if it’s Mara Jade, I hear she’s pretty awesome.

More like this
'Bridgerton' S3 Teases Exciting Social Season For Penelope Featherington
By Bustle
Letitia Wright's Aisha Encourages A Vital Conversation Around Immigration
By Maxine Harrison
Idris Elba & Tom Hollander Lead This Year’s Must-Watch Christmas Flick
By Maxine Harrison
You Definitely Know The Voice Of Shuri's AI In 'Black Panther: Wakanda Forever'
By Brad Witter
Get Even More From Bustle — Sign Up For The Newsletter