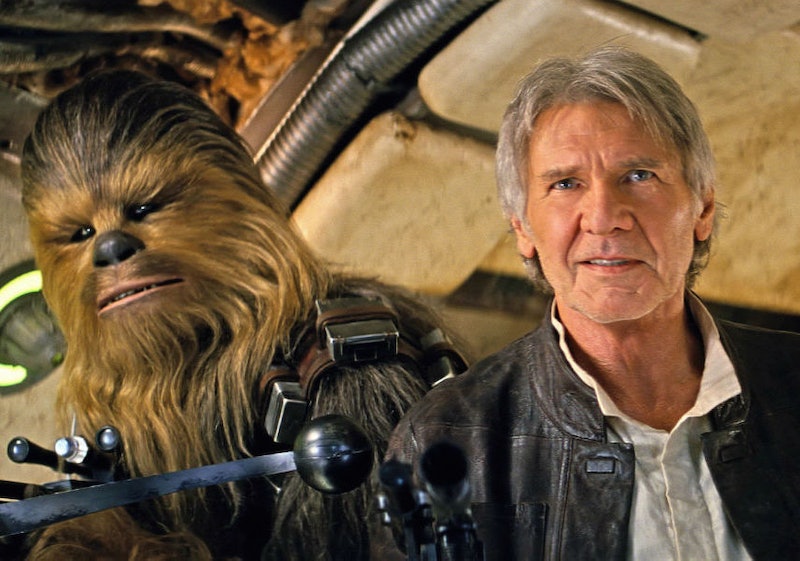 Ah, Chewbacca. That legendary Wookiee warrior that has been loyally at Han Solo's side since the original trilogy has captured the hearts, minds, and imaginations of so many Star Wars fans over the years, so a big question on everyone's minds is what happens to Chewbacca in The Force Awakens? The terrifying thing about bringing back old characters for new trilogies is that there's always a chance that these characters are pretty much just there to die to make room for the new cast. I don't blame Star Wars fans for being worried such a fate befell the Wookiee co-pilot who helped save the galaxy. If you can stand the spoilers that are about to come, and have the hand of a friend to hold, I'll tell you what you'll witness happen to Chewbacca in The Force Awakens . (Did I mention there are SPOILERS AHEAD?)

Chewbacca doesn't play a gigantic role in the movie, really, but he is a steady presence throughout. Naturally, when Han Solo appears in the film, Chewbacca is right there with his human best friend. He remains by Han's side throughout most of the movie until that horrific, tragic moment in the film when Han Solo freakin' dies. It's revealed in The Force Awakens that Kylo Ren is actually Ben, Han Solo and Leia's son, and, as Chewbacca, Finn, and Rey look on, Han tries to convince Kylo Ren to come home and give up the Dark Side. However, after a moment of conflict in which Ben almost gives up — a moment of hope shining in the eyes of everyone in the theater — the Dark Side grips Ben once more and Kylo Ren stabs Han with his lightsaber. If you think you're upset about that, imagine how Chewbacca reacted. It was terrible.

But that's not the last we see of Chewbacca in the film. By the end of the movie, Rey is strong with the Force and needs to be trained as a Jedi warrior, which leaves only one person available as the last Jedi to train her: Luke Skywalker. Chewbacca leaves with her to find Luke, because, I mean, Han Solo is dead. What else is he going to do with his time besides reach a furry hand out into the audience to grab the boxes of Kleenex the audience is going through? This sets up perfectly for the next film in the franchise, and marks the last time we see Chewbacca or Rey before the credits roll.