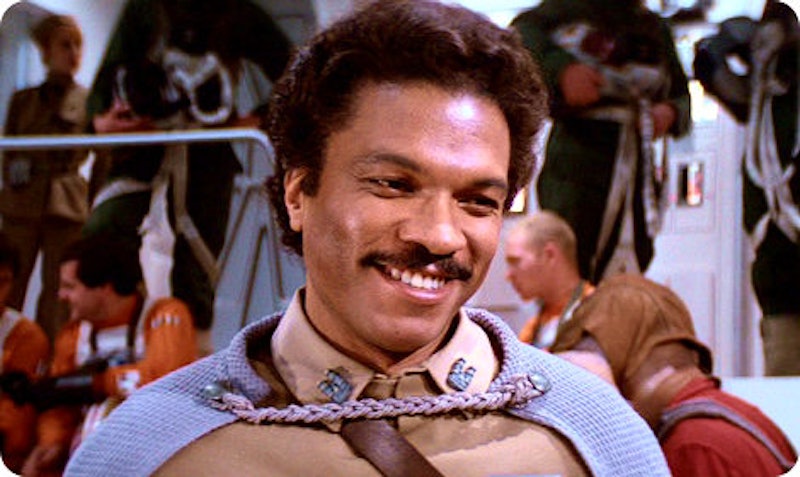 The seventh film in the Star Wars franchise, The Force Awakens, is really playing up the nostalgia of the original trilogy that began with 1977's Star Wars (A New Hope) and concluded with 1983's Return of the Jedi. With such a focus on the past, there are many fan theories about cameos in The Force Awakens. After it was revealed that most of the major characters from the original films were returning, i.e. Luke Skywalker, Princess Leia, Han Solo, Chewbacca, R2-D2, and C-3PO, attention then turned to smaller character cameos. Fans have since learned that minor aliens from the original trilogy, like Admiral Ackbar and Nien Nunb, will also be appearing in the new film, further bridging the gap between generations.

In addition to characters coming back, there have also been some celebrity cameos revealed in new roles. Simon Pegg will be appearing as an unknown alien, and it was just recently revealed that Carrie Fisher's daughter, Billie Lourd, has a cameo in the film — and she's even sporting her mother's old hairstyle (though she won't be playing Leia's daughter). But basically nobody thinks that everything has been unveiled. Fans are sure that some cameos are being saved for the film's release, and here are the actors and characters people think may show up.

This is easily the biggest and most hopeful theory, as his character Lando Calrissian was essentially the fifth Beatle to Luke, Leia, Han, and Chewie in the original trilogy. It's almost a given that Williams will reprise his most iconic role at some point in the new trilogy, and some fans (OK, all fans) are hopeful that his run begins in Episode VII. If Williams does have a surprise cameo in The Force Awakens, then kudos to the filmmakers for keeping it a secret this long, because come on, it's Lando!

Blame Simon Pegg for this rumor. The actor let slip that James Bond himself would be appearing as a Stormtrooper in the film, a claim that Craig later shot down. So is he in the movie or not? Right now I guess it depends on who you believe, but it seems like a rather odd rumor for Pegg to start.

The British actor has had a long career with iconic roles in the Harry Potter and Leprechaun series, but his most famous role is definitely as the Ewok Wicket in Return of the Jedi and some subsequent TV movies based around the furry aliens. He's listed as a part of the cast on IMDb, and Davis has coyly hinted that he could appear. He also played several characters in the prequel film A Phantom Menace, so his involvement doesn't necessarily mean the Ewoks are back, but it might. There's a rumor that The Force Awakens features a scene with a number of dead Ewoks on Endor, with Wicket being a survivor. Again, if this is true, then it's a pretty big deal.

While it's true that The Force Awakens isn't exactly embracing the prequel movies, there is a collection of fans theorizing that the villain from A Phantom Menace could appear in the new movie. After presumed dead at the end of his lone film, Maul was later revealed to be alive on the Clone Wars TV show — which is considered canon. So some fans think he's still lurking, with a few even positing that he's actually Supreme Leader Snoke. Seems unlikely, but hey, if they're looking to surprise fans.

Of the two Darths here, this one definitely seems more likely to show up. His helmet is in the trailer, and his presence certainly looms large over the movie. Vader's dead for sure, but he could show up as a ghost or in a flashback. It would certainly be nice to hear James Earl Jones' voice in the role again — not so much Hayden Christensen.

The cult-favorite bounty hunter has a prequel movie in the works, so wouldn't it make sense for Disney to re-introduce him to a younger audience? Plus, his uniform symbols do show up in The Force Awakens trailer, so he's probably at least referenced. Everyone knows he fell into the sarlacc pit in Return of the Jedi, but if anyone could escape from that slow digesting fate, it's Boba Fett.

Like Vader, the old Jedi master died in Return of the Jedi, but again could show up as a ghost or through a flashback. A report from starwarsnews.net claims that Yoda does appear in a scene, but whether it's true or not is anyone's guess. For what its worth, Frank Oz, who voices Yoda, has said he would be open to returning to the character.

There's the theory floating around that the most-loathed character in the galaxy is actually a Sith lord behind all of the destruction that's been wrought, so does that mean all will be revealed in The Force Awakens ? Thankfully there's no chance, as everyone involved has strongly insisted the new movie is 100 percent Jar Jar free.

No one knows for sure if any of these actors or characters will show up in The Force Awakens, but that's part of the fun. The film's marketing has revealed so much already, I really hope there are still some great surprises in store. And a Billy Dee Williams cameo would be pretty great.

More like this
The 'Hocus Pocus' Sequel Finally Has A Release Date & It Makes Total Sense
By Shannon Barbour and Radhika Menon
Everything To Know About Obi-Wan Kenobi Season 2
By Kadin Burnett
Who Is Liam Neeson's Character In The Obi-Wan Kenobi Finale?
By Kadin Burnett
“The Door Is Always Open” For Another 'Breaking Bad' Spin-Off, Says AMC Boss
By El Hunt
Get Even More From Bustle — Sign Up For The Newsletter