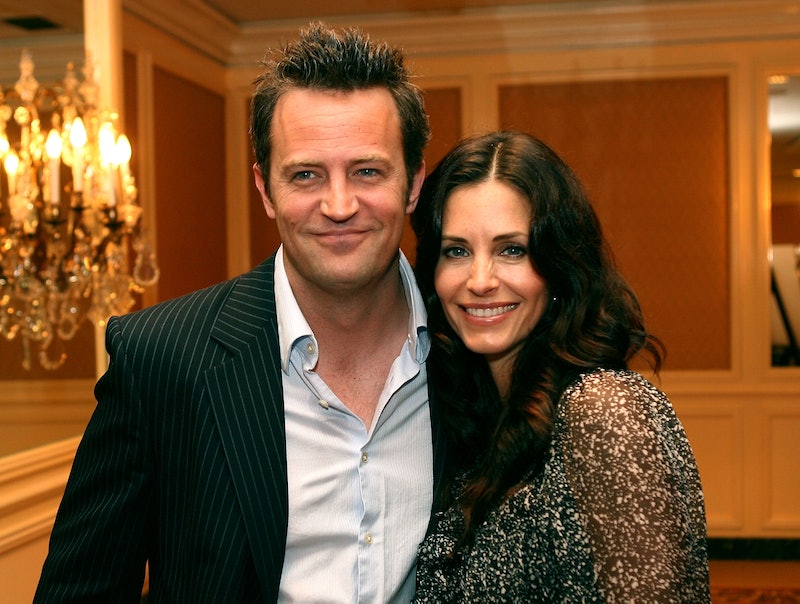 See that picture above? Yeah, that's a nice picture, isn't it? For a multitude of reasons. But one very important reason being that those two look reallly good together. For a split second, the world thought Matthew Perry and Courteney Cox were dating, but alas, a source claims to E! Online, that Cox and Perry are not actually dating. And thus, have ruined, as they call it, "reveries of a Chandler/Monica real-life romance," or as I call it, "My elaborate plans for an intimate island getaway wedding, with just close family, the Friends cast, and me." Honestly, how dare they? I had the venue picked, the festivities planned out, and the flights arranged. At this point, it’s just cruel.

Whatever, despite my crushed spirit, I tried to take the news like any functioning adult would. I grieved for a bit, watched some Friends re-runs, and obviously, had some wine. I even tried to do some Eternal Sunshine of the Spotless Mind-type brain conditioning in an effort to delete the proof that Mondler in real life is everything (see below), from my impossibly good memory. It almost worked, too. Almost. I was in an OK place spiritually and everything.

That is, until I had a majorly major epiphany.

As I was coming to terms with the fact that Perry and Cox are supposedly strictly platonic I thought, wait a minute. This seems familiar. Haven't they done this to us before? In fact, friends, they have. Are we all really that naive to believe that they aren't merely throwing us off their scent? Are we all just the "Ross" of this situation? I mean, as Star's "insider" relayed, "There isn’t any pressure to put a label on it yet, but they’re excited to see where this might go." Perhaps they just aren't ready for us to know yet!

If you didn't immediately get my allusion (which is shameful), let me refresh your memory. On Friends, when Monica and Chandler are dating in secret, Joey finds out about it and is then forced to cover it up the relationship to the other friends. Obviously, Rachel, and then Phoebe find it out anyway, but Ross, as usual, is the last to know.

But that's the thing, they're all trying to keep it from Ross so he doesn't freak out. Which, he obv does anyway. Kinda like how the Internet freaked out out over Perry and Cox. See where I'm going with this?

So, what does this all mean? Well, that I've watched entirely too many episodes of Friends and also that I am apparently a conspiracy theorist. But it also means that perhaps I'm onto something here.