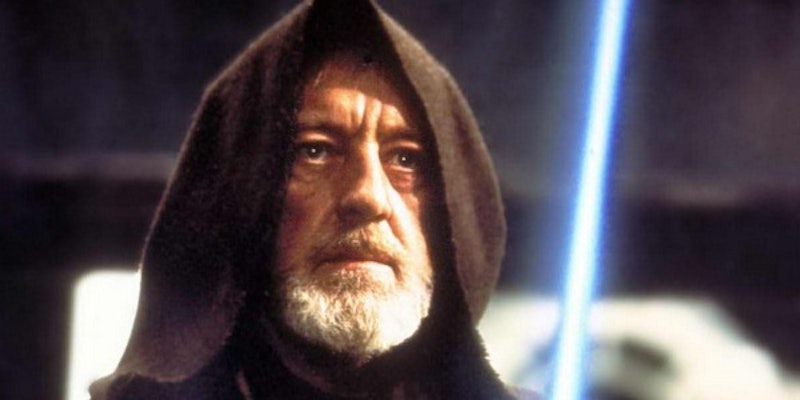 The day is finally here, and the movie we've all been waiting for is finally open, which means I'm going to get one of my bigger questions about the movie answered: is Obi-Wan Kenobi in Star Wars: The Force Awakens ? He's a crucial character in the series, appearing in all of the previous movies — portrayed by Alec Guinness as Luke Skywalker's mentor in Episodes IV through VI, and by Ewan McGregor as the master and later friend of young Anakin Skywalker in Episodes I through III. He's survived through two sets of trilogies at this point — even if he spent two films as a spirit — so does he make it to a third? Sadly, the answer appears to be no, although there are some subtle references to him scattered through the movie that I won't spoil for you so you can have the fun of discovering them for yourself.

Although it's disappointing that we don't get to re-meet Obi-Wan, either played by McGregor again or by a whole new actor, it's satisfying that his legacy is so deeply felt in this movie. Without Obi-Wan, there really wouldn't be a series, as he's the one who convinces Luke to take up Jedi training in 1977's Star Wars, later subtitled A New Hope. He guides the character on his journey to Alderaan, and consequently the audience as well, through the story; his presence in the background as Luke, Han Solo, Princess Leia, and Chewbacca take center stage is both constant and reassuring. Even after he's struck down in a lightsaber duel with Darth Vader, Obi-Wan avoids death through the Force, managing to return in both The Empire Strikes Back and Return of the Jedi as a spirit, dispensing more crucial advice to these beloved characters.

And, in the prequel films, he's just as central to the plot. In The Phantom Menace, we see the backstory of when he himself was a student of Jedi Master Qui-Gon Jinn, who, as his dying wish after a battle with Darth Maul, makes Obi-Wan promise to take Anakin Skywalker as his own Padawan despite Obi-Wan's reservations. Throughout the next two movies, Attack of the Clones and Revenge of the Sith, we see Obi-Wan and Anakin's relationship grow closer and closer, and Anakin grow more and more arrogant, until, finally, everyone knows, the two battle, with Obi-Wan maiming Anakin and forcing him to be transformed into a cyborg in order to survive. And then, of course, he goes full Dark Side on us, and becomes the Darth Vader that we all love to hate.

So it's safe to say that Obi-Wan has been intrenched in almost every single huge plot point so far. Thus, I think it's understandable that he doesn't show up in the new movie. Obi-Wan Kenobi has already been a mentor to each of the main characters of the previous trilogies, so it's time for other characters to get a chance to shine, and for Obi-Wan to get some much-deserved rest. Finally.