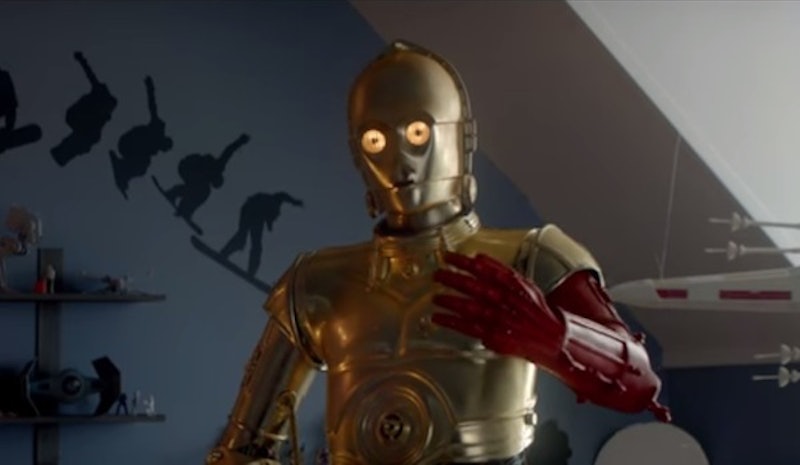 Well, kids, the Force is totally up and about now: Star Wars: The Force Awakens is in theaters, and now we're forced to decide which is our new favorite robot. Obviously, it's the criminally cute BB-8 who's slated to win our hearts and become the droid we're looking for (this Christmas season, because it was on our nephew's letter to Santa). But let's not forget your old-time favorite robots that pop up in the latest Star Wars installment. So, like, what exactly is C-3PO up to in Force Awakens ? Very gentle spoilers ahead for those who want to be completely pure going into the film.

The droid has had quite a long journey, particularly within the Skywalker family. When he first made his debut in the original film, he was escaping a rebel ship under attack by the empire, and, upon escaping to Tatooine, was adopted (along with his mechanical life mate R2D2) by Luke and his uncle. Just a day in the life. The prequels showed that this wasn't his first alliance by a Skywalker. Before he was a great golden nag, he was a tangled web of wire... nag. Apparently, Baby Anakin constructed him years ago, which... makes a lot of sense, if you look at all the whining. Still, Threepio is lovable in his way, and an important staple in the Star Wars pantheon. And that's why he shows back up in the Force Awakens... albeit in a relative minor role.

C-3PO is still out and about, landing mid-way through the film, fresh off Leia's ship. Meanwhile, his BFF R2D2 has been in a dormant low-power mode for God knows how long — but, don't worry, Threepio and BB-8 are actually getting along great. I smell a buddy comedy spin-off! No word on how he got his fancy new red arm; either multiple explosions required it, or he got an arm sleeve because he's busy fronting a thrash band in his spare time. Personally, I'm guessing the latter, maybe there will be more info on that in the sequel.

Anyway, in case you're worried, C-3PO remains relatively unscathed throughout the movie. No big, weird, dramatic C-3PO death or anything (which you can't rule out, this franchise made us sob at the loss of a muppet). Mainly, he's just serving his usual purpose: a shiny LOL-factory that'll calm down the kiddies among all the dark side/light side drama.

But you don't have to take my word for it. Make the mad dash to see Force Awakens, ASAP. You know, before all the relevant spoilers get to you.