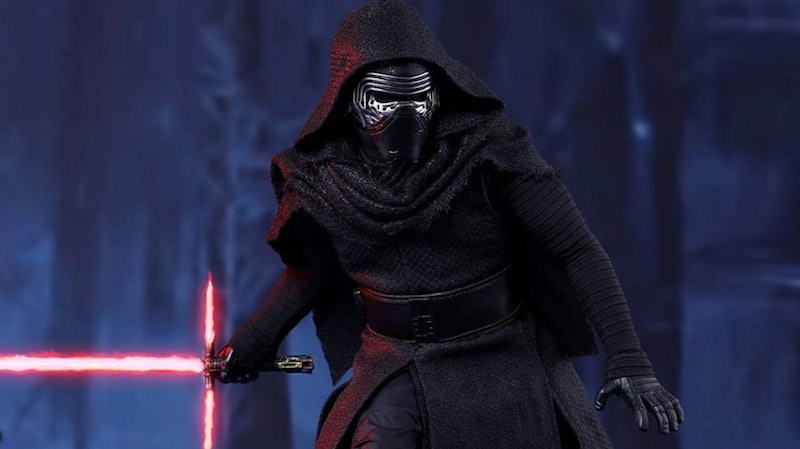 "If you live long enough, you see the same eyes in different people," Lupita Nyong'o's tiny, wizened alien character Maz Kanata tells Han Solo (Harrison Ford, of course) and Finn (John Boyega). Taken literally, she's speaking of the fear in Finn's eyes (he's a recently defected stormtrooper) — but more broadly, she speaks to the whole premise of The Force Awakens, the new Star Wars installment that unites old and new characters. There are some uncanny parallels between the generations, and a few uncomfortable family ties, but though Episode VII starts off with a few nods to the original six films, how The Force Awakens ends shows that the series will forge a new path.

The Force Awakens has about six different endings, each of which might have worked perfectly independent of the others, and I'm here to spoil them all. (That was a spoiler alert!) If you haven't seen the movie, you may want to turn back now, but also, if you haven't seen the movie, here's a bit of background: The Force Awakens focuses on the perennial battle between good and evil, here exemplified in the good of the Resistance (General Leia, star pilot Poe Dameron, Rey) and the evil of Kylo Ren (Han Solo and Leia Organa's son, who precipitated the collapse of the new Jedi order). Ren (Adam Driver) kidnaps Rey (Daisy Ridley) thinking she can lead him to Luke Skywalker, and Rey, out of necessity, finds that she can wield the Force to bend others to her will and to resist Ren prying into her mind. She escapes, and the final conquest begins.

The first ending depicts the death of Han Solo at the hands of his son Kylo Ren. Though Ren admits there's a kernel of good remaining in him, he wills himself over to the dark side — he secures the darkness within when he skewers his father on his lightsaber. (The scene shows visual parallels to the Darth Vader-Luke Skywalker fight in The Empire Strikes Back, except Han Solo is the one to plummet into the depths. Score one for the bad guys.) Han's trusty wookiee companion Chewbacca loses it when he sees his co-pilot and best friend's demise, and he proceeds to detonate the bombs he had placed strategically throughout the weaponized space station/planet.

Cut to the snowy forests of the planet, where Ren has tracked down Finn and Rey. He and Finn fight it out, and obviously the former stormtrooper (who, it is revealed, worked in sanitation during his days in Ren's forces) succumbs to the new master of the Force. But then Rey jumps in, and though untrained, the Force seems to be strong with this one. She nearly takes Ren down, but then the planet begins to collapse in on itself.

Which brings us to the third ending: Poe Dameron (Oscar Isaac) leads an attack on the star-eating weapon that has drained a nearby sun of all its light. The flight sequence bears distinct similarities to Luke's flight in A New Hope, though there's no repeat of his "one in a million" shot. Poe is talented, but he's no Jedi. That's one of the strengths of The Force Awakens — J.J. Abrams' reimagining deftly dances between paying homage to the old and striking out anew. The X-wing pilots collectively destroy the oscillator that keeps the star's captured energy under control, and the planet begins to melt down from the inside out. Off in the forest, a giant rift opens up between Rey and Ren. (Symbolic, much?)

And then there's the might-be ending in the Supreme Being's chambers. When the plan to take out the Resistance's home planet fails along with the massive First Order weapon, the Supreme Being tells Captain Phasma to bring Kylo Ren to him. It's time to complete his training, he says. The brief scene sets up for more development of the dark side than we've seen in previous films, where its actual objectives aside from, you know, embodying pure evil, are not entirely evident.

The story still doesn't end there, though that would have been a sufficiently ominous conclusion. The Force Awakens cuts back to the Resistance, where R2D2 awakes from a long period of dormancy. It turns out, his memory banks contain the rest of the map of which BB-8's map is just a fragment. The Resistance is finally in possession of a complete road map to Luke Skywalker's location.

Rey sets out with Chewie to track down Luke — they the Millennium Falcon, of course, despite her early assertions that the ship was a piece of junk. Leia sees them off, telling Rey, "May the Force be with you." Finally, we hear the reprise of that most iconic of Star Wars lines. The movie could end right here and set up perfectly for the sequel, with Rey landing on the home planet of the ancient Jedi order. But it doesn't.

There's one more ending: So I guess that makes seven. Just when you thought he might not return for The Force Awakens, that, despite the rumors, we'd have to wait another year or 30 to see Mark Hamill, Luke Skywalker appears. He aged significantly, grew a beard, dresses like an ascetic, and, when Rey thrusts his lightsaber towards him, he looks at it with a distressed, conflicted expression.

Cue the theme music. The camera wheels out, circling around the two heroes of their respective generations. To be continued.