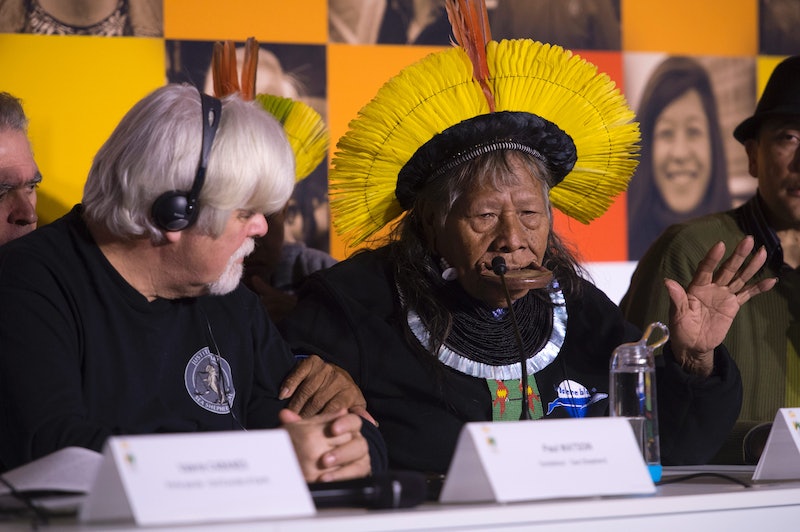 Last week, 196 countries voted to adopt a climate change agreement at the COP21 talks in Paris that would limit overall global warming to 1.5 degrees Celsius. This agreement has been widely proclaimed as historic, which it certainly is. But it also left out most references to the traditional knowledge of indigenous peoples, as well as calls to protect their human rights. Here's the problem: All around the world — and especially in low-lying coastal communities and island nations — indigenous people are often the first to feel climate change's impact, but they are rarely included in large-scale attempts to achieve climate justice. The Paris climate talks were not an exception.

As with any other movement for political, social, and economic justice, the fight against climate change must center those who are most marginalized. Climate change strongly affects indigenous communities around the world. In many regions, these communities often face forced migration or the prospect of evacuation because of the rapidly rising seas. Mdewakanton Dakota and Dińe activist Dallas Goldtooth, who was heavily involved in the fight against the Keystone XL pipeline, told AJ+ at COP21 that climate change also challenges the very ways in which many indigenous peoples live.

It's so frustrating. We tend to be the first communities that feel the effects of climate change. It affects our way to hunt, to gather, to live off our traditional subsistence lifestyles. We're also oftentimes at the point of extraction, whether it's mining, or fracking oils, or coal companies are coming in, or deforestation efforts. And so it's a double whammy that we're getting here.

Indigenous folks from all over the world — ranging from the Sami people of Scandinavia to indigenous activists from the United States and Canada — came together in Paris to fight for their rights. And yet, the mainstream climate justice movement still tends to be overwhelmingly white. What many organizers around climate justice fail to recognize is that climate change is not a stand-alone issue. It is and must remain an intersectional one. That means that climate change cannot be separated from racism, it cannot be separated from the structures of oppression perpetuated by capitalism, its gendered nature cannot be denied, and it disproportionately affects black and brown bodies internationally — especially those of indigenous folks.

There are groups out there working to make the fight for climate justice more diverse and inclusive, such as the Wretched of the Earth, which is a collective of grassroots Indigenous, black and brown organizations representing diaspora from the Global South. At a climate march in London, NGOs called the police on Wretched of the Earth activists because their anti-colonial, intersectional narrative did not fit within the "respectable" corporate climate. But it should be obvious by now that climate justice cannot be won unless folks simultaneously fight for all forms of justice. Rather than compartmentalizing different struggles, organizers around climate justice need to fight within a framework that recognizes the interplay between all forms of oppression.

If you organize around or even remotely care about climate justice, it is imperative that you listen to and amplify the voices of indigenous people around the world. Their communities are in a state of emergency. Climate change is not just something to talk and think about in the abstract — it is real, it is happening right now, and it is drastically impacting indigenous populations. We cannot fight climate change if we are not also simultaneously fighting the erasure of indigenous narratives, the theft of their lands, and the removal of their rights from international agreements.