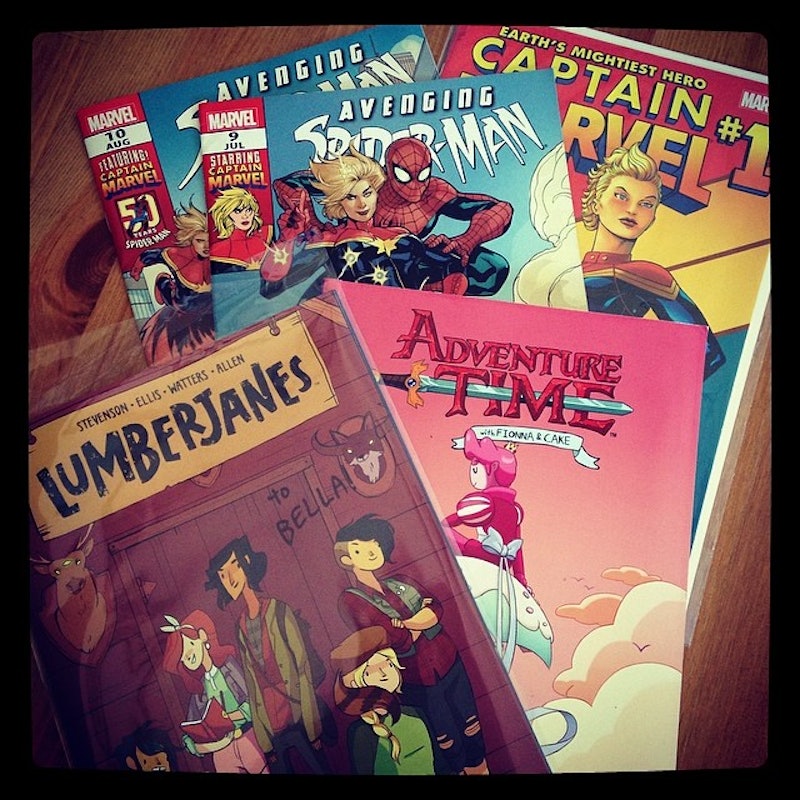 If you're craving new comics, and want to support great causes with your purchase, there's one place you can always go to get your — charitable — fix. And you should absolutely go there right now, because Lumberjanes is available in the Humble Comics Bundle. For the next 12 days, $15 gets you $759 worth of digital, multi-format, DRM-free comics. In the words of Michael Scott: win-win-win.

Lumberjanes is the collaborative effort between writers Grace Ellis, Noelle Stevenson, and Shannon Watters and artist Brook Allen. Stevenson is best known for her work on Adventure Time and the hit 2015 graphic novel Nimona. The series centers on five summer friends attending Miss Qiunzella Thiskwin Penniquiqul Thistle Crumpet's Camp for Hardcore Lady Types — say that five times fast — where they encounter supernatural creatures and magic puzzles. It's a huge step forward for women in comics getting the respect they deserve, both as an audience and as creators.

Stevenson's series joins Bee and PuppyCat, the webseries-based comic from fellow Adventure Time-alum Natasha Allegri. Allegri is the woman behind Fionna and Cake, the gender-swapped versions of Finn and Jake. If you aren't familiar with Bee and PuppyCat, you might recognize the title characters from the Facebook stickers pack of the same name.

The Humble Comics Bundle is divided into three tiers. Paying anything less than the average amount — $11.44, at the time of this writing — gets you everything in the first tier, which includes the first volumes of both Lumberjanes and Bee and PuppyCat. Pay more than the average amount and less than $15, and you'll get everything in the first two tiers. And, of course, $15 or more gets you the entire Humble Comics Bundle.

Get Lumberjanes, Bee and PuppyCat, and the rest by purchasing your Humble Comics Bundle today.