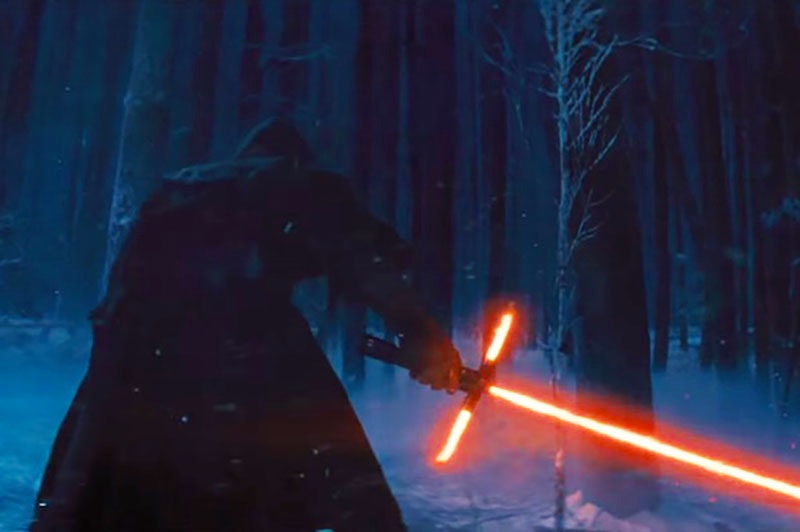 For those of you who have yet to see the film, continue reading at your own risk. In fact, you should probably close your computer and go straight to your local movie theater and get a ticket, because that is the only way to avoid all the spoilers today. There is so much to decode in the newest Star Wars film, but the biggest mystery lies with whether or not Kylo Ren and Rey are related in The Force Awakens. Where do they fit into each others lineage? Are they related at all? Because everyone is dying to know. Over the years, we've learned a lot about Luke Skywalker's family. We know who his father is. We know who his sister is. And now, we just might know of another Skywalker relative. Did I mention there are spoilers ahead?

After seeing the movie, it's not too far of a jump to assume that Kylo Ren and Rey have a some strong connection tying them together, one that can only be explained by family relation — and, of course, there are a few well placed hints along the way. The writing is on the wall, and everyone is dying to know who they are to each other. After decoding the thinly veiled hints, and, by process of elimination, the relation between the two can be broken down into simple math.

OK, so this one is pretty obvious. It's not too difficult to understand that Han Solo and Leia got together and had a baby named Ben. If you don't understand how that happened, well, that's a whole different subject. For now, all you need to know is that child grew up to be Kylo Ren — surprise!

As you know, Luke and Leia are brother and sister. This makes Luke Kylo Ren's uncle, obviously, which doesn't come as a huge shocker, but it does put his relationship with Rey into a bit more perspective.

OK, so this one is a bit of a stretch, because no one ever explicitly states Rey is his daughter. However, there are some pretty strong context clues that provide a solid case for Rey being Luke's daughter. First of all, remember when Kylo Ren tries to force summon the lightsaber and it flies to Rey instead? Or when C-3PO says that R2-D2 has been in a low functioning state since Luke left, but, when Rey appears, he magically turns on just in time to give them the map of where Luke is? Or, at the end, where the Force is strong in Rey, just like it was in a certain Skywalker line? Interesting, very interesting...

Together, all of that equals Kylo Ren and Rey being cousins. A complicated equation for a not-so-complicated answer.

Although none of this was explicitly revealed in the film, there's a strong chance that the next film will feature a line along the lines of, "Rey, I am your cousin." One can only dream.