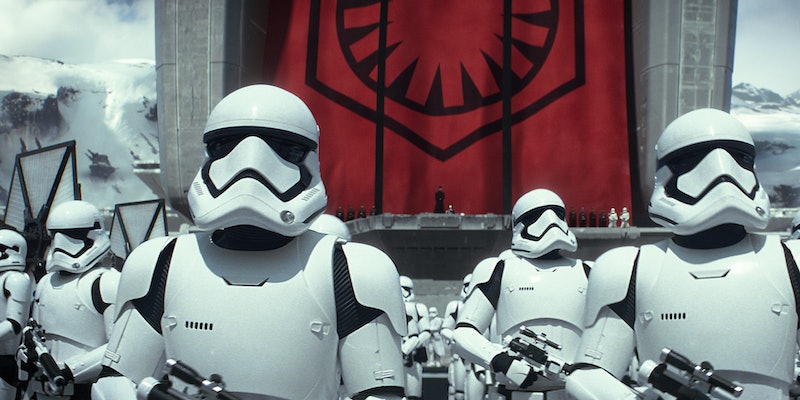 When I think of Star Wars, I usually experience the warm and fuzzy feelings that come with any piece of pop culture that I've loved for the majority of my life. It's easy to forget that these movies contain a whole lot of death and despair. The losses are balanced out by acts of heroism, forged friendships, and the cheerful beep-boop-beeps of some very cute droids, but they are there. The question of who dies in Star Wars is often one of the hardest to answer for new fans and old. And maybe it's too obvious to mention, but seeing The Force Awakens represented the first time in over a decade that I watched a Star Wars movie without knowing which characters were on the chopping block. So, who dies in The Force Awakens ? There are spoilers ahead, obviously. Turn back if you haven't seen the movie yet and prefer to stay in the dark.

With so much plot kept under wraps, all me and my fellow audience members could be sure of is that not everyone would make it out of The Force Awakens alive. The return of the original trio of Luke Skywalker, Leia Organa, and Han Solo added both to my joy and to my panic. Could the filmmakers possibly resist the emotional wallop of killing one of them off? (They couldn't.) And, while that particular demise is what most fans will be talking about in the wake of the premiere, it wasn't the only one. Here are all the characters who die in The Force Awakens. We may not know all their names, but we remember them, just the same.

I woke up the morning after my screening hoping that it was all a terrible, horrible, no-good dream. But it's true. Han Solo, smuggler and Rebel Alliance general, met his end in The Force Awakens during a last-ditch effort to save his son from the Dark Side. And with one lightsaber thrust, Kylo Ren became the most hated villain in Star Wars history. Which brings me to...

Ben Solo didn't have the guts to fall completely away from the Light on his own. He needed his father's sacrifice to do it. When Ben killed Han, he died as well. There's no Solo or Organa left in him: only Ren. Unless Luke returns in Episode 8 and can succeed where Han failed.

The Stormtrooper who eventually took the name of Finn had an attack of conscience in the middle of the First Order's raid of Jakku. One of his compatriots falls, smearing a bloody hand across Finn's helmet when he does. Not only does Finn's reaction show that his training didn't diminish his compassion, but the blood mark served as a nifty storytelling device that trumped Stormtrooper anonymity and enabled audiences to follow his journey.

Who is Lor San Tekka and how did he know the location of Luke Skywalker? That information may have died with him and the rest of his village in Kylo Ren's Jakku massacre.

The leaders of the Resistance are quick to dispel any assumption that the First Order's Starkiller base is a carbon copy of the Death Star. In fact, it's 17 times larger. And, if you thought the ability to wipe out one inhabited planet at a time was bad, then, boy, does General Hux have a demonstration for you...

RIP the many brave souls who fought alongside hotshot pilot Poe Dameron.

A Lot Of Stormtroopers

Now that I know that at least one had the ability to turn against evil and regain his humanity, Stormtrooper casualties aren't as easily accepted as they used to be.

Anyone Left On The Starkiller Base

General Hux and other high-ranking officers escaped. But I'm guessing the explosion took out Captain Phasma, who'd been shoved in a trash compactor by one of her inferiors. That's karma for you.

Out of all these Star Wars deaths, Han Solo's will no doubt hurt the hardest and the longest. Good night, sweet prince!